Rambod addressed Big Ramy falling to fifth place and paid respect to the sacrifices Hadi Choopan/Derek Lunsford made for 2022 Olympia. 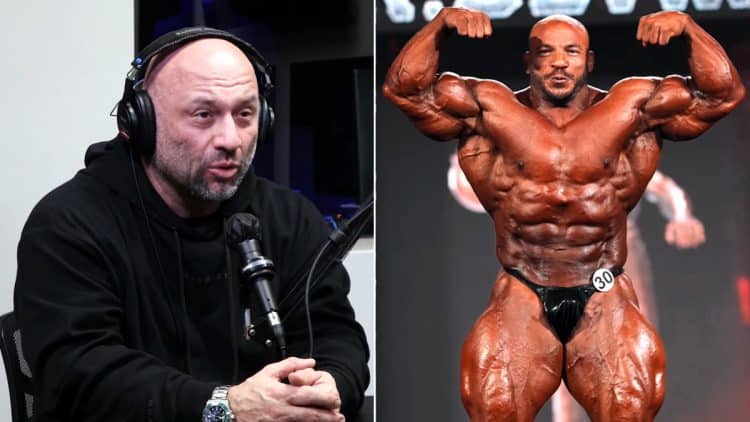 “It’s one of those things… you look at a current Mr. Olympia dropping that much, it’s a pretty substantial hit,” Rambod said while discussing 2022 Olympia.

The 2022 Mr. Olympia competition ended with a number of surprises. For starters, Big Ramy dropped to fifth place. Steve Weinberger, the head judge at the event, mentioned Ramy was off and suspected the former champion was suffering from an injury.

By the end of prejudging, it was evident former 212 Olympia Derek Lunsford and Hadi Choopan were fighting for gold. Nick Walker asserted himself into title contention during the finals as well but placed third. Lunsford finished runner-up in his Open Mr. Olympia debut, which many believe paved the way for him to take the title from Choopan next year.

While the outcome was tough to accept, Lunsford was happy for Choopan and took solace in knowing he is one step away from becoming Mr. Olympia. One of the biggest winners leaving Sin City was Hany Rambod, who guided Lunsford, Choopan, and Chris Bumstead to success.

“We had Hadi [Choopan] here for six weeks. We had Derek [Lunsford] — he had his ups and downs. I don’t want to talk too much about Derek because I want to be able to get that straight from the horse’s mouth. Because we had some crazy crazy ups and downs during that prep,” says Hany Rambod.

He explained that Choopan’s victory was the result of hard work, persistence, and never giving up. Despite his travel issues and hearing problems, Choopan defied the odds to become the 17th man to earn a Sandow.

“Well, it’s a culmination of hard work, persistence, never giving up. When he [Hadi Choopan] was talking about how he didn’t – he sacrificed so much. He didn’t have money for bus fare in Iran to go to the gym, to go to places. He didn’t have the ability to communicate properly so people made fun of him because of his hearing disability.

All of these things were just a culmination of just being able to have that inner drive to work so hard that he would be able to someday raise a trophy over his head, to say, ‘I’m the best in the world at what I do,’ regardless of the passport. I just can’t even talk about it, it makes me crazy thinking about it. It’s so overwhelming because if you look at it, everyone said it, there’s no way he’ll ever be Mr. Olympia. So many people,” says Rambod.

“Most people said he’s not the typical Mr. Olympia. I looked at it and said, ‘well, neither was Ramy.’ Ramy, even though he spoke some English, he didn’t have the hearing situation, he didn’t have the passport situation, but they let him win and I felt like, ‘well he won, so why can’t Hadi?’ And if he’s consistent — and I think that was the number one reason why he won was his consistency.”

Looking back on the Men’s Open prejudging, Rambod shared that his primary focus was exposing the flaws of Derek and Hadi so they could fix the issues overnight for the finals.

Some of Rambod’s concerns were inconsistent lighting and ensuring that his athletes didn’t use too much tanning oil as it could blur the lines of their physiques.

“No, [I don’t think about call-outs]. All I do is find flaws. I was finding flaws in color, posing, oil, I’m just making sure they’re not wiping too much oil off of Derek. Making sure that I’m going to tell Hadi later to wash that tan off because it looked bad. Making sure that these guys are all hitting their poses,” Rambod said.

Rambod on Big Ramy Finishing 5th at 2022 Olympia: ‘Only His Team Know What They Did’

After seeing Ramy on the 2022 Olympia stage, Rambod said he noticed a few issues with his look. Specifically, Hany thought Ramy looked watery and washed out or blurry. It should be noted that some veterans of the sport like King Kamali, suggested Elssbiay used too many diuretics, which caused him to look off.

I don’t know what they did. Everybody keeps trying to say, ‘hey, he carbed up on some junk,’ or maybe he took too many diuretics. I’m not going to sit there and speculate; they only know what they did. All we know is the result wasn’t optimal. I thought they were going to be pushing them in that third or fourth — then they just kept him on the side. That’s when I started realizing that it looked like he was going to be fifth,” says Hany Rambod.

According to Rambod, Ramy barely held on to fifth place and thought Samson Dauda would have taken his position with better conditioning.

“Some said Samson [Dauda] could have even beat him and I think if Samson was a bit tighter, he would have,” says Rambod. “I feel like with Nick and Derek and Hadi, those guys were just really battling it out.”

Big Ramy was quick to comment on his performance following the 2022 Olympia. Days after finishing fifth, he promised he would come back improved. Moreover, the former champ made it clear he would fix any problems with his physique as soon he figured out what went wrong.

A close friend and training partner of Ramy, Dennis James, is still confused about what happened to the Egyptian native. He thought Ramy looked on point one week out from the contest but later revealed Ramy looked flat after prejudging.

Rambod hopes Derek Lunsford will offer details regarding his crazy up-and-down Olympia prep in due time. Given the sacrifices Choopan made to earn his first Sandow, Rambod couldn’t be prouder of the 36-year-old’s accomplishment.