Mass monsters Nick Walker and Hunter Labrada 'push each other' training ahead of 2022 Mr. Olympia: "174 days until we put on a show for y’all" 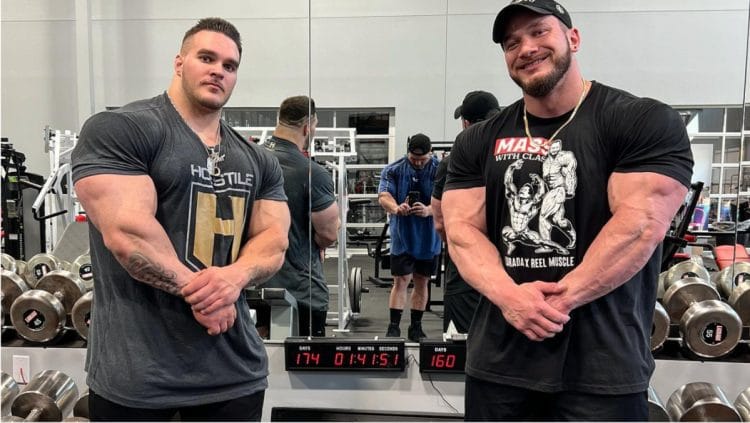 One of bodybuilding’s most exciting rivalries between top 2021 Olympia finishers Nick Walker and Hunter Labrada will be settled once and for all this December. “The Mutant” and Labrada recently made headlines after training together in preparation for 2022 Mr. Olympia.

Nick Walker quickly established himself as a threat in the Men’s Open division throughout the last couple of years. The New Jersey native put the rest of his division on notice when he won the 2021 New York Pro. Momentum followed the IFBB Pro at the Arnold Classic in the same year, a contest that saw him victorious en route to defeating the likes of Iain Valliere and Steve Kuclo. Before leaving last year in the rearview, Walker competed at 2021 Olympia where he managed to earn fifth place in his debut.

Hunter Labrada, son of bodybuilding Hall of Famer, Lee Labrada, gained notoriety after taking home gold at the 2020 Tampa Pro. While he took his best possible package to Olympia that same year, Labrada landed in eighth, respectively. Determined to right the wrongs of his previous season, Labrada dominated the 2021 Chicago Pro in first place before trying Olympia again. Labrada outperformed “The Mutant” at the Olympia last year by placing fourth.

Ahead of the marquee show in 2022, Walker and Labrada have consistently posted physique updates. There are less than six months until 2022 Mr. Olympia, and off-season preparations are beginning to heat up for both athletes. As of late, Walker and Labrada excited fans after they posted a snippet of an intense training session.

Nick Walker and Hunter Labrada on Competitive Beef: “No WWE Bullsh*t Between Us”

In a recent post made to Instagram, Labrada revealed that he and Walker are working hard to make their ‘lifetime dream’ of becoming Mr. Olympia a reality.

“174 days until we put on a show for y’all⭕️
–
There will be no WWE bullshit between us between now and then. Just both of us working our asses of to make our lifetime dream come true👊🏻” Hunter Labrada wrote.

Despite their obsession with achieving the same goal (winning a Sandow trophy), Walker and Labrada are vehemently pushing each other outside of competition. Both intend to present the ‘best versions’ of themselves on the 2022 Mr. Olympia stage in under six months.

“When it comes down to it, we are going to push each other to be the best version of ourselves because we both want to face each other at 100% ourselves.

Given their physiques, fans continue to group Walker and Labrada together, especially after going toe-to-toe last year at Olympia. After coming in fifth behind Labrada at last year’s show, Walker thought he brought a more complete package to the stage. However, four-time Mr. Olympia Jay Cutler said the opposite, asserting that Hunter’s overall look was more appealing to judges.

Ahead of 2022 Olympia, fans have already seen Walker and Labrada on stage, albeit during their off-seasons. They guest-posed for Jim Manion’s Pittsburgh Pro last month, which featured both men on stage alongside 212 Olympia champion Derek Lunsford and 2022 Arnold Classic champion Brandon Curry.

Of course, this isn’t Walker’s only rivalry when he takes to the Olympia stage later this year. Blessing Awodibu called Walker out after winning the 2022 New York Pro, vowing to ‘whoop’ Walker’s ass when the two compete this December.

With no shortage of viable contenders, Walker and Labrada will be tasked with facing one of the deepest lineups of talent in Olympia history. After training together, Walker and Labrada are keen on finding out who reigns supreme in Las Vegas in just under six months.