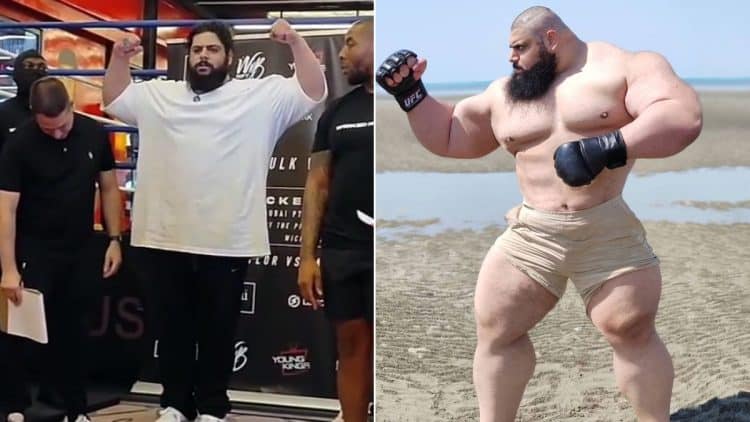 Social media sensation Iranian Hulk (real name Sajad Gharibi) gained notoriety online for his gigantic build. He looked like the real-life Marvel superhero Hulk due to his size and shape. Following a humiliating loss to the Kazakh Titan last month, Hulk has now cleared out his Instagram account, deleting dozens of photos accused of being ‘photoshopped.’

The Iranian Hulk was set to face Martyn Ford for his boxing debut after sharing a heated rivalry. During the build-up to their bout, the two clashed for the first time at the face-offs in Dubai. Gharibi looked very different in real life than in his photos online and did not leave a good impression with fans after failing to take Ford down. Their bout did not come to fruition after Hulk revealed that the embarrassing encounter led to his family disowning him.

Ford feared Gharibi might commit suicide if they fought and declared the bout was off via Instagram. Gharibi moved on from Ford and found a replacement in Djumanov Almat Bakhytovich, better known as the “Kazakh Titan.” Things heated up when they stood across each other at the face-off as Hulk landed a half-slap across his opponent’s face.

Sajad finally got the chance to step inside the cage against Titan on July 31 in Dubai, United Arab Emirates. In a lackluster performance, the Iranian Hulk got thoroughly dominated by Titan. Hulk appeared to have little to no understanding of boxing fundamentals and started to turn his back on Titan before getting finished in the very first round.

Iranian Hulk previously issued an apology to the people of Iran after his loss. He expressed how ashamed he was about the performance. It’s unclear what direction Hulk will take as far as his combat sports career is concerned. The revamp of his social media profile indicates he may have moved on from his old persona and could be looking ahead to his next venture.