After his fight with the Iranian Hulk fell apart, Ford remains committed to his combat sports debut, 'morning work done .... no excuses' 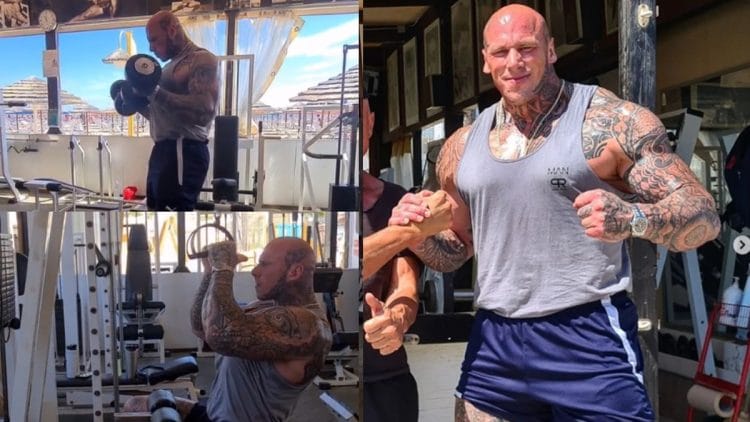 After his boxing debut with Sajad Gharibi (widely known as the Iranian Hulk) fell apart, Martyn Ford hasn’t let off the gas, continuing preparations for a potential fight in combat sports. In a recent update on social media, Ford showed off his gargantuan physique while hitting a series of workouts in the gym.

The lead-up to the fight between Iranian Hulk and Ford was filled with chaos. Before the two could touch gloves, they met in Dubai for a face-off to promote the boxing showdown. It was evident in Dubai that Ford would clearly have the size advantage if/when the two fought. After a scuffle saw Iranian Hulk crashing to the ground, things only escalated from there. Gharibi made headlines in an emotional interview, where he explained that his parents disowned him because of the embarrassing face-off encounter.

According to Ford, the Iranian Hulk did not represent the same image that was portrayed on social media. The fight was subsequently called off by Ford via Instagram, who insinuated that there were overarching problems with ‘health and safety precautions’ relating to the potential fight. Their saga became a tale of two different stories as the Iranian Hulk implied that it was Ford who pulled out of the contest. Due to Ford’s perceived withdrawal, Iranian Hulk relayed his plans to sue his opponent for a breach of contract.

The plot only thickened when Ford revealed that Iranian Hulk and his team surrounded him at his hotel room in Dubai. After revisiting the Iranian Hulk drama, Ford explained that he feared being arrested in foreign territory, so he opted to remain in his hotel room, avoiding any unnecessary conflict. While his fight with Iranian Hulk is seemingly off the table, Ford has made it a point not to slow down his training regimen.

Martyn Ford is “Loving Training”, Still No Opponent on Horizon

In a recent post made on Instagram, Ford gave fans a sneak peek into one of his recent training sessions. From T-bar rows, cable lat pull down/close grip, and Dumbbell biceps curl to cable exercises, the six-foot-eight specimen is training as if he has an opponent in mind.

Morning work done ….. no excuses, finally getting to try out these @boohoomanactive vests, loving training in this incredible gym, surrounded by such inspirational people, a true Old School setting. A must visit for any bodybuilding fan. Martyn Ford posted.

While his debut in boxing has yet to happen, Ford has also voiced interest in a potential mixed martial arts fight. In fact, Ford signed a contract with the Polish MMA promotion KSW years ago, though an actual fight never came to fruition. One opponent that Ford has mentioned is five-time World’s Strongest Man Mariusz Pudzianowski, who currently competes under the KSW banner. Ford believes that Hafthor Björnsson would also be an ideal opponent, especially after defeating 2017 WSM Eddie Hall in their marquee boxing match.

There are a number of viable opponents for Ford to fight, and surely in due time, he will let fans in on who he believes will be his next challenger. Judging by his recent workout, Ford plans to bring explosiveness and speed when he finally makes his combat sports debut.

Forearm Splints — All You Need to Know