The seven-time Mr. Olympia discussed the potential of Andrew Jacked comparing him to the likes of Nick Walker, Hadi Choopan, and Brandon Curry 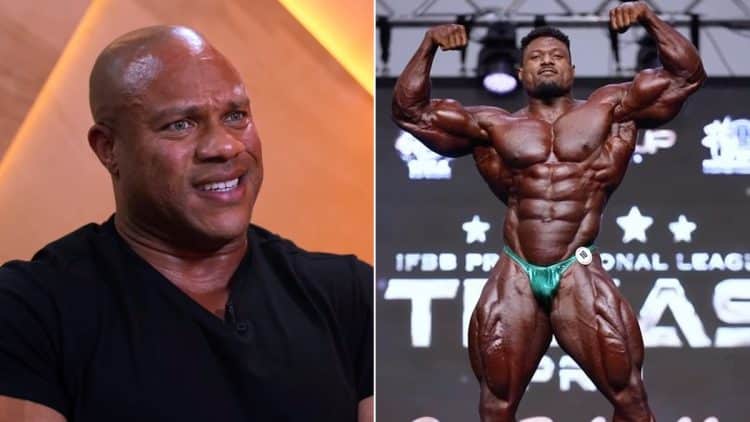 Legendary bodybuilder Phil Heath is one of the most decorated athletes to compete in the sport. The seven-time Mr. Olympia understands what it takes to win at the highest level. In a recent video on the Muscular Development YouTube channel, Heath talked about the potential of Andrew Jacked and compared him to other promising contenders.

Heath is widely regarded as one of the greatest bodybuilders ever to grace the stage. Nicknamed “The Gift,” Heath matched the record of bodybuilding icon Arnold Schwarzenegger, after taking home the Sandow trophies for seven years in a row (2011-2017). He had a dominant run up until the late Shawn Rhoden dethroned the longstanding champion Heath in 2018 after a close showdown.

Heath did not give up on his hopes to tie the record of fellow bodybuilding legend Ronnie Coleman, who won the Olympia title eight times. He came back to compete in 2020 but was edged out by the champion Big Ramy and the runner-up Brandon Curry to get third place. While he has hinted that he may be done competing, Heath made headlines after announcing that he would be on the mic at the upcoming 2022 Mr. Olympia as a commentator.

Many believe the rising prospect Andrew Jacked (real name Chinedu Andrew Obiekea) is expected to bring one of the best packages at this year’s Olympia. After winning the 2022 Texas Pro, Jacked gained recognition in the community. He received a lot of praise from bodybuilding legends, such as Jay Cutler and Mark Anthony, who believe Andrew has the potential to take over the Men’s Open division.

However, not everyone is sold on Andrew just yet. Bodybuilding veteran Samir Bannout backed Michal Krizo to beat Andrew at the Olympia. Although Krizo has yet to earn his pro card, Bannout seems very confident that Krizo has it all to win the top spot on the podium.

In a recent video uploaded to Muscular Development’s YouTube channel, Heath shared his thoughts on the potential of Andrew Jacked.

Heath does not like to go off assumptions. He analyzed Andrew based on the physique he brought to competitions.

“That’s the hard part. Until we have seen you bring it, I don’t like to believe in fairytales. I can say yeah, sure if he came in conditioned, but what are we talking about? We are talking about competitive Men’s Open bodybuilding. You better be freaking ripped. So, this whole tinking around and this and that, now you kind of set yourself up. Me and George, we kind of set the table for, what we are going to expect in the UK, a shredded version this time or are you still holding him back saying that you’re going to do that at the Olympia.”

The 42-year-old Washington native believes Andrew’s lack of professional experience can work against him. He also had a hard time putting him over Samson Dauda, who may also emerge as a serious threat.

“The problem is that if you say that and don’t deliver it don’t look good because now you produce this expectation by fans, and that’s the last thing Andrew needs is people have this stupid expectations of him coming out the gate. Not to say that he’s weak-minded or anything, it’s just unnecessary.

“My idea is just, yeah, could he be top five? I don’t know man because he is that tall. Put him next to Samson Dauda, man. Are we going to just sh*t on him? I don’t know dude, I gotta see. I can’t just go based on pictures, I can go by on video. Does he have some really good muscle? Hell yeah, hell yeah. Can he fix a lot? Yes, he’s got room to grow, for sure.”

“A lot of people get excited about a newcomer, I was one of them. What weapons does he have to just demolish a Nick Walker, demolish a Hadi (Choopan), demolish Brandon Curry? Before you even get to Ramy, what does he have that is just going to demolish these guys?”

When the interviewer Ronald Harris countered that Andrew had the shape that could see him beat the other top contenders, Phil Heath called him on the statement. He also argued against the idea of Andrew having a bigger classic-style physique and pointed out some of the holes he sees in his game.

“That’s bulls**t, Ron. What are we taking about, shape, that’s it?” Heath added. “That doesn’t look like it has fullness. It looks find of flat… I’m just saying when I see that, when he puts his hands over his head, (he has a) very large canvas.

“But, I wish I would have been at the show, man. I’ll have to check out the next one. I wish him all the freaking best. He’s bringing excitement to the sport and I love that.”

Heath closed out with some advice for Andrew and stated what he would do if he was in Jacked’s position.

Phil Heath may not be competing but his love for the sport still remains strong. After an intense battle with COVID-19, Heath returned to the gym to regain the muscle he lost. He appears to have recovered well in a recent physique update where he looked massive, showing off his humongous biceps while performing dumbbell curls.