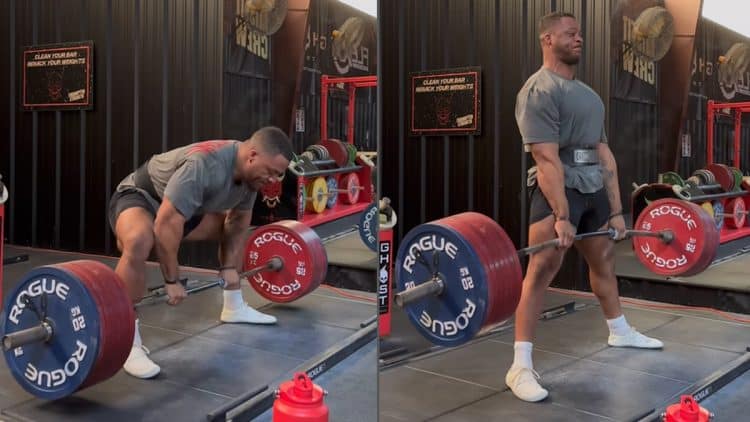 Jamal Browner recently put up one of the greatest performances of this year at the 2022 USPA Pro Raw Championships. However, within a relatively short time period, Jamal is already back to lifting heavy loads again. Seeing that he has made a solid foundation in the past few weeks, Jamal is also setting new personal records. It is exciting to see that he has achieved yet another record in the deadlifts, having scored a new PR by pulling 410 kilograms (903.9 pounds) for four paused repetitions. Jamal shared the video of his newest achievement on his Instagram.

Jamal Browner’s newest PR was raw by powerlifting criteria, since he only used a lifting belt. On the other hand, his technique paired up the sumo stance and hook grip. Although this was Jamal’s new PR, it looked incredibly easy for him, as he managed to pause each rep and then lock it out without any struggle.

What is also mind-blowing to think about is that Jamal Browner managed to put in 1,640 kilograms (3,615.6 pounds) of deadlift volume in just a matter of few seconds.

Although Jamal Browner’s bodyweight at the time of his recent PR was not specified, we can use his competition history as a reference. Since he usually competes in the 110-kilogram (242.5-pound) weight class, he is probably not much heavier now. In addition, it doesn’t seem like Jamal plans on competing again anytime soon, but nothing is official yet.

This year has arguably been the greatest in Jamal Browner’s career so far, and there is still one month to go. Apart from winning some competitions and setting official World Records, Jamal had one historic lift which he will cherish forever. The feat of strength in question is his 500-kilogram (1,102.3-pound) deadlift from one training session in late September. With that, Jamal unofficially became just the fourth person to lockout at least half a ton. Strongmen Eddie Hall and Hafthor Björnsson performed theirs in sanctioned events, while fellow powerlifter, Krzysztof Wierzbicki, completed his in training like Jamal.

As for his official stats, Jamal Browner has taken part in 16 sanctioned competitions and won 10 of them. Jamal also set all of his competition PRs at the 2022 USPA Pro Raw Championships.

With every new PR that he scores, Jamal Browner just solidifies his status as one of, if not the greatest pound-for-pound deadlifter in the world. A feat once considered impossible by humans is now easily accomplished by Jamal. Considering he is lifting more than 900 pounds, any further improvement will fall within the realm of historic lifts.