Polish Powerlifter Krzysztof Wierzbicki unofficially deadlifted more than anyone ever has. 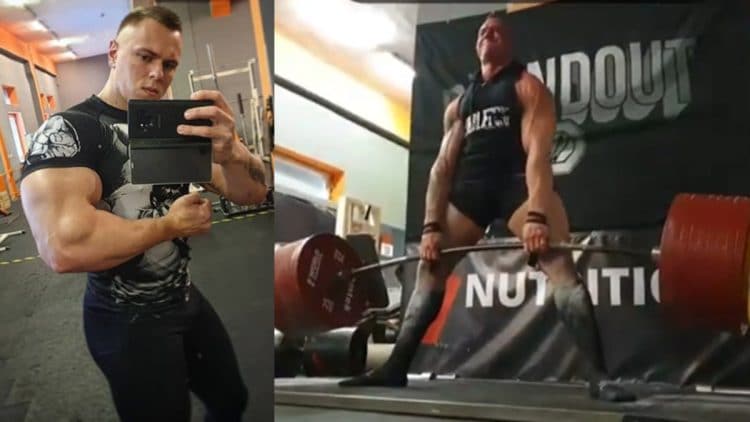 Powerlifter Krzysztof Wierzbicki has set his intentions clearly a long time ago, and we know that his primary goal was to deadlift 500 kg (1102.3 lbs). The caption of Krzysztof’s Instagram account has stated “ROAD TO 500 KG” for a while, and he has now managed to accomplish his goal. On April 27th, Krzysztof shared a video in which he can be seen deadlifting 502.5 kg (1107.8 lbs) in training. As it is heavier than the current World Record, Krzysztof’s pull is Unofficially The All-Time Heaviest Deadlift.

However, Krzysztof Wierzbicki used lifting straps to aid him in the lift, while also utilizing the sumo stance. This makes Krzysztof Ineligible to claim the World Record, as the use of lifting straps is prohibited in powerlifting, and the sumo stance is not allowed in Strongman. So to officially claim the World Record, Krzysztof would have to either leave out straps, or start lifting with a conventional stance. Nonetheless, his 502.5 kg (1107.8 lbs) deadlift is one of the greatest feats of strength ever.

Krzysztof Wierzbicki did not specify his bodyweight at the time of the lift, but he usually competes in the 110 kg weight class. He is definitely the lightest man to lock out this much weight on a deadlift.

History Of The 500 kg Deadlift

Only two people have managed to deadlift 500 kg (1102.3 lbs) or more, and both were Strongman competitors. Two athletes that lifted half a ton are Hafthor Björnsson and Eddie Hall, and they both lift conventional. The first person to lift half a ton was Eddie Hall. He set the old deadlift world record of 500 kg (1102.3 lbs) at the 2016 Giants Live Deadlift World Championships.

Hafthor Björnsson then broke Hall’s record and set a new one with a pull of 501 kg (1104.5 lbs). He set the record at his home gym because of Covid-19 restrictions back in 2020, while World’s Ultimate Strongman regulated the lift.

Powerlifter Jamal Browner also attempted to deadlift 501 kg (1104.5 lbs) in January of this year, but was ultimately unsuccessful. However, he did manage to get it off the floor, but not to lock it out. The holder of the All-Time Heaviest Raw Deadlift in powerlifting, Danny Grigsby, is also a contender for the half a ton pull.

Krzysztof Wierzbicki has just cemented his place in history with an unfathomable 502.5 kg (1107.8 lbs) deadlift. This also brings the sumo stance into a new era, and it will be interesting if anyone manages to follow his steps. It would be fascinating if Krzysztof somehow improves his grip strength and performs the lift again without lifting straps to claim the world record.