The reigning champion's strength was on full display during training sessions led by his coach, Dennis James. 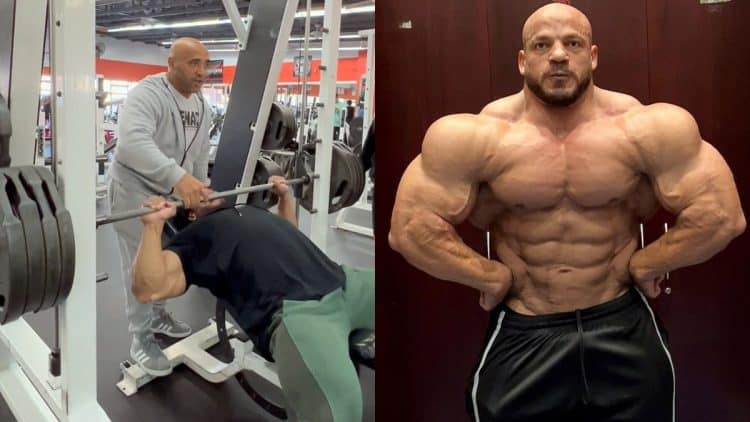 Reigning two-time Mr. Olympia Mamdouh ‘Big Ramy’ Elssbiay hopes to capture his third title this year, and one of his coaches, Dennis James, appears confident in his chances. On Instagram, James shared a few videos of Ramy training in preparation for the 2022 Mr. Olympia contest in two weeks.

“Big Ramy 100% focused on being the best he can be.” Dennis James shared via Instagram.

During the off-season, fans questioned Ramy’s passion for the sport after he missed a guest-posing appearance at the 2022 Pittsburgh Pro. He apologized weeks later, and in a call with Olympia President Dan Solomon, confirmed he would be at his best in Las Vegas, NV. for his next title defense.

Unlike previous seasons, Ramy has been more active on social media. Before starting contest prep, he was tipping the scales at 337 pounds. Coached by Dennis James and Chad Nicholls (who also trained eight-time Mr. Olympia Ronnie Coleman), Big Ramy continues to push himself to new heights. In fact, just a few days ago, Nicholls predicted that his two clients Big Ramy and William Bonac would place first and second, respectively.

In Sept., Ramy discussed his competition and named who might give him trouble at Olympia next month. The champ admitted that he’d get ‘fu**ed up’ in battles against Hadi Choopan, Brandon Curry, and William Bonac should he enter the competition not at 100 percent. Ramy also suggested that his only weak point this year might be his conditioning, but he hopes to change that before stepping on stage.

In an Instagram post made by Dennis James, the defending champion can be seen demolishing reps on the incline bench press on Smith Machine.

The 38-year-old continued the training session with barbell curls.

In an additional clip, James shared a video of Ramy on the Stairmaster. Over the past few weeks, the Egyptian native has been shredding down to bring his signature wow factor to the Olympia stage. Many fans called attention to the reigning champion’s ‘death face’ recently. Ramy’s noticeable cheekbones are an early indicator that he’s maintaining a very low body fat percentage.

The reigning champion will face a number of challengers next month. Four-time Mr. Olympia Jay Cutler believes counting out William Bonac and Brandon Curry would be a mistake given their accolades. Meanwhile, last year’s Olympia third-place finisher Hadi Choopan is waiting in the wings too. ‘The Persian Wolf’ is finalizing the last stages of prep in the U.S. under the guidance of Hany Rambod.

Aside from those mentioned, rivals Hunter Labrada and Nick Walker will settle the score after their close encounter last year. According to Walker, however, his eyes are fixated on Big Ramy’s title. He told seven-time 212 Olympia winner Flex Lewis recently that he will ‘1,000 percent’ become this year’s champion.

Though, it’s not just last year’s top finishers who have ambitious plans. New talent has made its way into the league as of late. In March, Andrew Jacked earned an IFBB pro card and won his first two pro shows consecutively after claiming gold at the 2022 Texas Pro and Arnold UK. In Oct., Slovakia’s Michal Krizo dominated headlines after winning his pro card and a Pro show all in the same month.

Considering the depth of the lineup this year, it’s never been more difficult to predict the outcome. With just two weeks until 2022 Olympia, Ramy is keeping his head down and is focused on bringing a next-level physique.