CBum and The Persian Wolf go through a back workout under Hany Rambod’s guidance as 2022 Olympia prep continues. 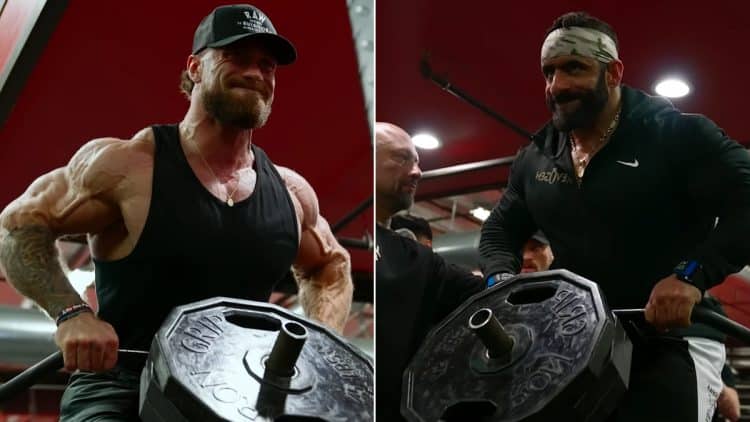 Chris Bumstead and Hadi Choopan are making the most of the last few weeks before 2022 Olympia kicks off. The most prestigious bodybuilding competition will take place in Las Vegas, NV from Dec. 15 to 18 and the duo is busy doing the final bit of work on their physiques. Canada’s own Chris Bumstead has already proven his worth by winning the Classic Physique Olympia title three times – in 2019, 2020, and the 2021 Olympia. He will attempt to further his legacy with a fourth consecutive win. The 27-year-old ended his coach-client relationship with fellow Canadian professional bodybuilder Iain Valliere for the latter to focus on his own career. Famed bodybuilding coach Hany Rambod is now training Bumstead for the 2022 Olympia. CBum has been routinely training with Open division competitor and Rambod’s client Hadi Choopan in recent weeks.

Choopan is an Iranian professional bodybuilder and one of the frontrunners for the 2022 Mr. Olympia crown. He finished third at the 2021 Olympia behind champion Mamdouh ‘Big Ramy’ Elssbiay and runner-up Brandon Curry. However, many people argued that ‘The Persian Wolf’ deserved the nod from judges due to his muscle density and detail. He will attempt to leave no doubt this year and take the Mr. Olympia crown to Iran. CBum and Choopan trained their backs under the tutelage of Hany Rambod. Now, without further ado, let’s take a closer look at the detailed summary of this training session.

Chris Bumstead and hadi Choopan go through an intense back workout

Hany Rambod put CBum and The Persian Wolf through an intense back workout using the FST-7 (Fascia Stretch Training) method. Developed by Rambod, the FST-7 training method was famously used by 7-time Mr. Olympia Phil Heath. In this training method, the initial exercises are done for three to four sets with approximately two minutes rest period in between. However, the last exercise is done for seven sets and the rest periods between the sets are reduced to 30 seconds.

Hany Rambod instructed Bumstead and Choopan to start the workout with the lat pulldowns. The duo got a few sets of this exercise under the belt and took to the next exercise. Rambod explained the correct technique for maximum benefits and said:

“What we want to do is come down as much as we can, try to control the weight, especially on the eccentric which is on the way back up. Concentric, don’t go too fast. But you really don’t want to go fast on the way up. You don’t want to use momentum. Stretch and then squeeze all the way to the bottom… Almost like you can hold it just for a split second, especially on the warm-up sets.”

Hany Rambod reiterated that keeping the muscles under tension for a longer duration is of utmost importance for making gains. A lot of people rely on the momentum during the later sets once they are tired. The famed bodybuilding coach explained that doing partials at the end is a lot more beneficial than doing full reps with poor technique. He said:

“If you keep the tension there even if you’re doing the shorter range of motion i.e. partials, you’ll still get much more out of it than if you just let them swing the last couple of reps…”

The duo next performed the barbell rows under Rambod’s watchful eye to work their backs further and performed a few solid sets.

CBum and Choopan next jumped into the machine variation of the previous exercise. The duo performed the bent-over rows on the machine unilaterally to focus more on the mind-muscle connection and took to a vertical pulldown movement next.

Rambod guided his clients through two different variations of lat pulldowns next. Initially, the famed coach instructed CBum and Rambod to do the exercise on a converging lat pulldown machine. However, he switched to doing lat pulldown with D handles and explained:

“The Panatta machine is converging. It is a great machine. Unfortunately, long arms with CBum, therefore we had to move them over here to the other machine to get a little bit better stretch.”

CBum and Rambod performed a few sets on the diverging lat pulldown machine and jumped into the next back exercise.

The training partners next jumped into the exercise that Arnold Schwarzenegger popularized. They added stimulus to their backs by crushing a few sets of this compound movement and attacked the final exercise of the day.

CBum and Choopan wrapped up the training session with this isolation movement using the FST-7 principle and cranked out solid sets with minimal rest periods.

Chris Bumstead and Hadi Choopan have both looked phenomenal in their recent physique updates. The clock is ticking fast and it is just a matter of time before the 2022 Olympia weekend kicks off. If Bumstead and Choopan continue to push each other in the gym and emerge victoriously at the 2022 Olympia, this competition prep will forever go down as a golden chapter in their as well as Hany Rambod’s already illustrious careers.