Jamal Browner left the strength community in awe with a 500-kilogram (1,102.3-pound) pull. 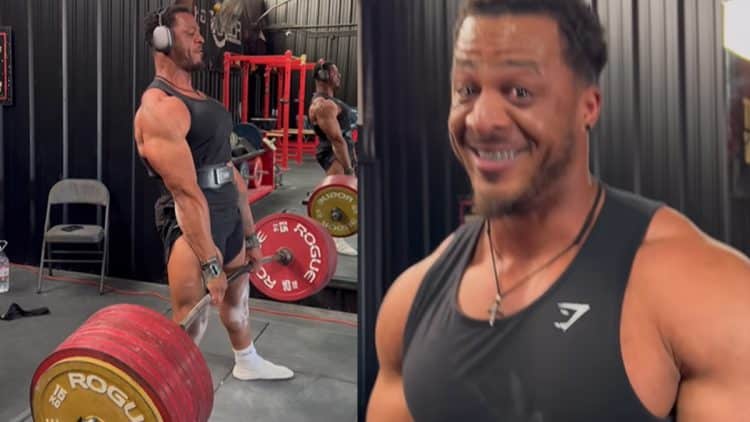 Jamal Browner delivered one of the best performances of the year during his recent appearance at the 2022 USPA Raw Pro. Although Jamal did set two new All-Time World Records at that contest, he has eventually managed to outshine those accomplishments with another feat that is even more impressive. Only five days after his competition, Jamal Browner felt that he was capable of doing even better. So, he loaded 500 kilograms (1,102.3 pounds) on a barbell and successfully deadlifted it. Jamal then shared the video to his Instagram account.

Jamal Browner’s 500-kilogram (1,102.3-pound) deadlift is unofficially for multiple reasons, but it seems to be legit. The first thing to note is that he did the lift in training, not a sanctioned event. However, Jamal did use calibrated weight plates like they do in official competitions. In addition, he utilized lifting straps, which are prohibited in powerlifting competitions, but this is still arguably the greatest feat of strength across all strength sports. Apart from straps, Jamal performed the lift using a sumo stance and a lifting belt, which are both allowed in powerlifting.

Considering Jamal Browner is a powerlifter, he will not be able to use lifting straps during competitions. Furthermore, as he continues to enhance his grip strength, he will be able to pull half a ton in the near future with ease. However, he could also make a move to Strongman, which would allow him to use straps, which is highly unlikely, because the sport does not allow sumo stances.

Deadlift World Record At A Glance

Only two men have officially lifted at least 500 kilograms (1,102.3 pounds). Eddie Hall was the first man to lift this exact weight at the 2016 World Deadlift Championships. Hafthor Bjornsson then broke his record in 2020, which now stands at 501 kilograms (1,104.5 pounds). At the time of their record-breaking lifts, both men weighed at least 200 kilograms (440 pounds) and used deadlifting suits, alongside lifting straps. Jamal Browner, however, did not use a deadlifting suit and weighed around 110 kilograms (242.5 pounds).

Another two powerlifters are possible candidates for the 500 Kilograms (1,102.3 pounds) deadlift. The first one is Krzysztof Wierzbicki, who pulled 502.5 kilograms (1,107.8 pounds) unofficially as well. The second one is Danny Grigsby, who holds the Official Heaviest Raw Deadlift In Powerlifting of 487.5 kilograms (1,074.8 pounds). Grigsby made this an official record at the 2022 WRPF American Pro.

Powerlifter Jamal Browner is currently at the peak of his career, as he set all four new competition PRs at the recent 2022 USPA Pro Raw. That was Jamal’s 16th time taking part in a sanctioned powerlifting competition, of which he gathered 10 victories.

Jamal Browner attempted to lift 467.5 kilograms (1,030.8 pounds) raw at the 2022 USPA Pro Raw, but was not successful. After seeing him crush the 500-kilogram (1,102.3-pound) deadlift now, it is obvious that he just needs to fine-tune some details in order for him to continue to progress. That will take some time, but once everything is perfect, Jamal could become the lightest person to lock out half a ton.