With this latest feat, Wierzbicki is closing in on achieving his 500 kg lofty goal. 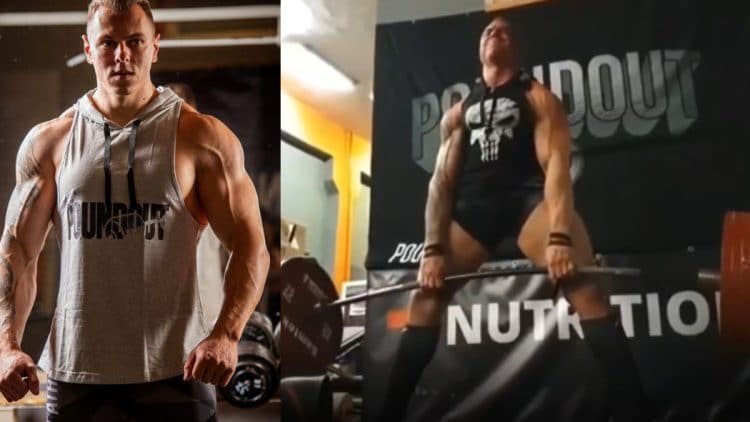 The Polish-born powerlifter Krzysztof Wierzbicki made his goal known to everyone that he wants to deadlift 500 kilograms down the road and it seems like he’s nearing that. On April 20th, 2022, Wierzbicki achieved an incredible feat by pulling 490 kg (1080.3 lbs) in training. Just about a week ago, Krzysztof deadlifted 461 kg (1016 lbs) for three reps, so everyone was waiting to see him lift a heavy single and he certainly didn’t disappoint.

Only two men have ever officially lifted more than Krzysztof Wierzbicki, and both of them used deadlift suits. However, Krzysztof did not use any equipment apart from lifting straps, not even a lifting belt. This means that his 490 kg (1080.3 lbs) deadlift is unofficially the heaviest without a deadlift suit. Krzysztof’s style of deadlifting is with a sumo stance. It is currently unknown how much he weighed at the time of this lift, but his usual powerlifting weight class is 110 kg (242.5 lbs).

Krzysztof Wierzbicki is a well-rounded powerlifting athlete, but he is mostly known for his deadlift prowess. Krzysztof has taken part in 37 sanctioned competitions, and won 27 of them. He has had numerous incredible performances in the past and in the process claimed some impressive competition PRs.

Krzysztof Wierzbicki is notorious for his gravity-defying deadlifts, made it clear a long time ago that his primary goal is to pull 500 kg (1102.3 lbs). As said before, only two Strongman athletes have ever lifted more than Krzysztof’s recent pull in an actual competition, but both of those were at least half a ton. Eddie Hall deadlifted 500 kg (1102.3 lbs) back in July 2016 and became the first man to do so. However, Hafthor Björnsson outperformed him 4 years after that and set a new All-Time World Record of 501 kg (1104.5 lbs).

Moreover, two other strongmen, Peiman Maheripour who deadlifted (492 kg / 1084.7 lbs) and  Ivan Makarov (490 kg / 1080.3 lbs) are capable of pulling as much as Krzysztof Wierzbicki, but the Polish athlete currently has momentum on his side. It is also worth noting that Krzysztof is much lighter in bodyweight than them.

Although Krzysztof Wierzbicki is dominating the powerlifting stage, there are two more athletes from his sport who are chasing him. Danny Grigsby and Jamal Browner are both within the range to catch up to him, but he still has a comfortable advantage.

Krzysztof Wierzbicki has already claimed the deadlift World Records in the 100 kg weight class. However, he is now very close to claiming the 500 kg (1102.3 lbs) deadlift, a feat which he set his sights on doing it from a long time. Krzysztof has not revealed the plans for his future, but we could expect him to attempt the half a ton pull very soon.