Regan Grimes gets some extra posing help after running into two legends. 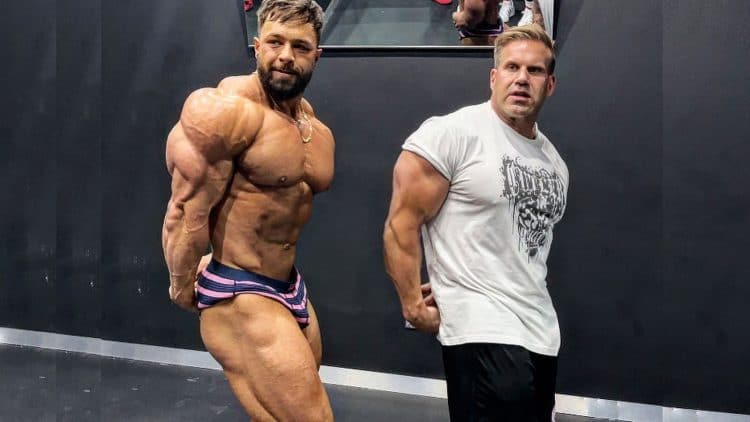 Bodybuilding phenom Regan Grimes met up with Jay Cutler and Iris Kyle who shared some wisdom and a couple of useful poses. As one of the top bodybuilders in the world, Regan Grimes welcomes the help from the Olympia champions.

Taking place at the Powerhouse Gym in Las Vegas, the three and bodybuilding veteran Milos Sarcev trained together. After witnessing his rise in the sport, Regan Grimes appears to have championship material in his veins. With the potential to take over Open Men’s bodybuilding, the young, yet disciplined bodybuilder has switched gyms and coaches until he’s been satisfied with the results.

With that in mind, Milos Sarcev has already taken the reigns in coaching Regan Grimes. Already, in the short timeframe, the two have started training together and Grimes has made notable leaps in development. In fact, his recent change in coaches already appears to be paying dividends. During his time in Vegas, Grimes has shown a more muscled-out stomach and has also shown increased conditioning.

Milos Sarcev is confident Grimes could win Olympia in a few years’ time. Without a doubt, if the two keep making dramatic improvements in practice like they have, that lofty goal is increasingly becoming more realistic.

Grimes not only has Sarcev in his corner but recently took to social media to reveal that bodybuilding legends Jay Cutler and Iris Kyle are helping him out with a couple of poses.

“Posing sessions in Vegas with some of the greatest to ever do it. 🐐 So thankful for opportunities like this to learn from the best!”

It’s safe to say Cutler and Iris have some useful knowledge considering they are both multi-year-winning Mr. Olympia titleholders. The wisdom inspired by Cutler and Kyle is a byproduct of their attention to presenting muscle in an artistic manner. While in Vegas, Grimes admits both legends were able to dole out some useful pieces of posing information.

As Regan Grimes continues to make great career moves outside of competition, surely the world has yet to see his full potential as a bodybuilder. After getting the opportunity to practice posing with Jay Cutler and Iris Kyle, Grimes continues to evolve at a healthy rate.

3-time Olympia competitor Regan Grimes is a pillar of consistency when it comes to bodybuilding. Known for his relentless work...

Bodybuilding star Regan Grimes is known for his activity and has been a consistent force whenever he enters a sanctioned...

The sport of bodybuilding has witnessed a number of unfortunate and untimely deaths in the industry. Following the death of...