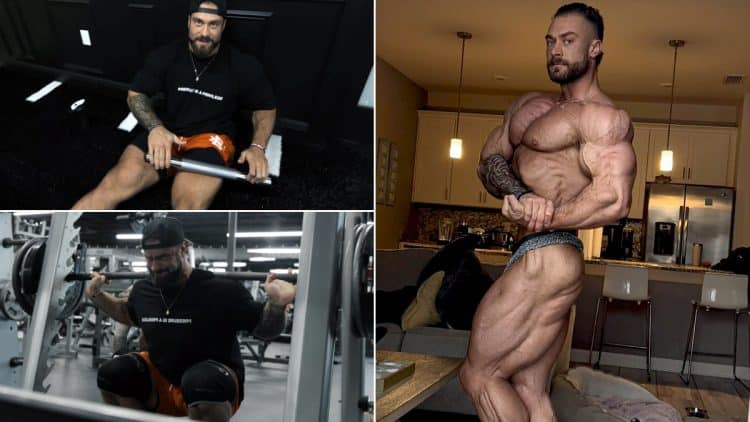 Reigning Classic Physique Olympia champion Chris Bumstead recently shared a grueling leg day workout. He won the classic physique Olympia crown in 2019 and defended it in 2020 and 2021. CBum will attempt to score his fourth consecutive win at the 2022 Olympia that will take place from December 15th to 18th in Las Vegas, Nevada.

Bumstead started his off-season training following a battle with a severe Covid-19 infection around last Christmas. Over the course of these eight-plus months, CBum has made steady progress in the gym. With the 2022 Olympia in sight, Chris Bumstead’s off-season training is nearing its end. His current training routine involves two leg days. After Bumstead starts cutting calories to prepare for his Olympia appearance, he will be able to display the results of his off-season gains on stage.

He recently posted a workout video on his YouTube channel focusing on building his quadriceps.

Chris Bumstead stressed his knees while playing basketball a few weeks ago. As a result, he has resorted to a new warm-up method that he adopted from the ‘Knees over Toes Guy’ Ben Patrick, who is a big proponent of walking backward and sled-pulling to train the lower body without hurting the knees. CBum’s leg day session started with backward walking on the Elliptical machine to avoid straining the knees further. Following this, he jumped right into the heavy work and started with a superset first.

Superset – Leg extensions on the machine and lying leg curls

Chris Bumstead started the workout with this superset. In addition to warming up the target muscles (quadriceps and hamstrings), leg extensions and leg curls are beneficial in warming up the knee joint which is used in almost all leg exercises. Hence, warming it up is essential for injury prevention.

“Starting with this superset just to warm up my knees in opposite directions… Trying to make my legs tired so when I move over to squats or something I don’t have to go as heavy…” Chris Bumstead said.

Chris Bumstead performed both exercises with moderate weights and moved on to the next exercise.

Chris Bumstead terms the Smith machine as the GOAT (Greatest of all time) for doing squats. He explained that it allows him to place his feet right in front of him – similar to the foot placement in sissy squats. As a result, it puts a greater emphasis on the quadriceps and reduces the stress on the knees.

The Classic Physique Olympia champ started the exercise with one plate on each side and slowly worked his way up to the top set of seven reps with five plates. He later performed a couple of sets with three plates to get more workout volume and avoid stressing the knees with heavier weights.

Bumstead performed the last set of Smith machine squats as a superset with Sissy squats. The lower body workout on this day was quads-focused. Sissy squats primarily strengthen the quads and hip flexors. In addition to this, they increase core strength and improve balance.

Single Leg Press on the machine

Chris Bumstead next performed single leg press on the machine. He did the first set as a regular set and stopped a couple of reps before failure. CBum then performed the next set of 11 to 12 reps with the rest-pause method and wrapped up the exercise after a third set of six to seven reps. Following this, Bumstead admitted that his legs were ‘beat up pretty good’.

With the muscles pre-exhausted and knee joints sufficiently warmed up, Bumstead shifted his focus back to the traditional leg extensions on the machine. He performed two triple drop sets of this movement to work the quads and moved on to the next exercise.

Chris Bumstead performed a few sets of leg curls to work the hamstrings and seated calf raises. The 27-year-old incorporates calf exercises in most of his workouts. The seated variation of this movement works the soleus muscle in the calves that lies beneath the gastrocnemius muscle. These movements served as the finisher as Chris Bumstead wrapped up the workout after a few sets.

Chris Bumstead will soon start his 2022 Olympia prep. While he would have preferred to start the prep without any nagging injuries, the 27-year-old has no choice but to train with bad knees for now.

“It’s that time of the year where there’s no time for being a little b**ch. It’s literally at a point where before if I have an injury, milk it a little bit. I don’t want to hurt myself more. But now I’m at the point where I am like if your knee hurts, you’re gonna have to just hurt it for the next 18 weeks and suck it up and deal with it after the show.”

It does seem a little harsh on the body but this approach has helped Chris Bumstead to score three Olympia wins so far. 2022 Olympia is approximately 18 weeks away and Bumstead is pushing through a lot of adversity to score his fourth consecutive win at the show. Looking at the work he has been putting in, we might witness a historic win for CBum yet again.

It remains to be seen if this leg routine will likely give the impression of a narrow waist and a strong quad sweep when performed at Olympia in December.