There is no doubt that this young bodybuilder is one of the future household names in the sport. 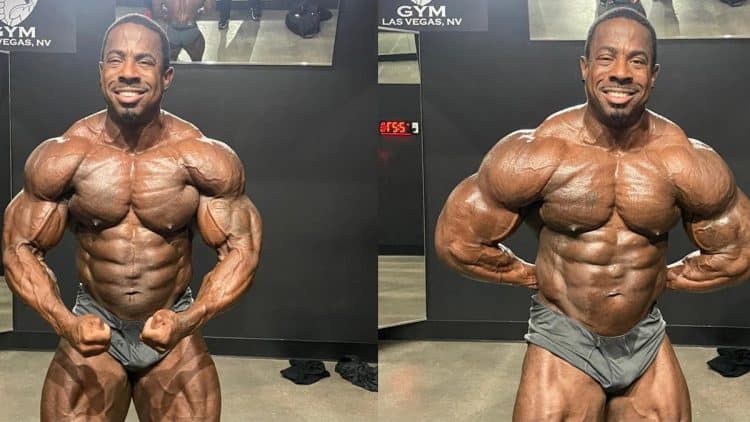 Joe Mackey is currently focused on bringing the best package to the upcoming shows and wants to demonstrate to others that he is capable of standing alongside the most prestigious names in the industry. As a result of his recent feat of strength, he has already gained a lot of attention.  Mackey recently deadlifted 900 pounds (408.2 kilograms) in training and thus became the “Strongest deadlifter in IFBB history”. The majority of Joe’s training was dedicated to deadlifts, but he also prepared for a bodybuilding competition along the way. Consequently, Joe didn’t neglect his bodybuilding career at all. His approach paid off greatly, as Joe Mackey shared a physique update in which he arguably looks better than ever.

Joe Mackey recently trained at the Dragon’s Lair Gym in Las Vegas, NV, which is owned by 7x 212 Olympia winner, Flex Lewis. Mackey’s coach, the bodybuilding veteran Milos Sarcev, also joined him in Las Vegas. Aside from training sessions, they practiced posing a lot. It was actually Milos Sarcev who shared about 40 posing pictures divided across ten slides on his Instagram. He captured all angles of Mackey’s physique, and it is obvious that he looks impeccable. There is no doubt that Joe’s conditioning at this point is up to par. However, his back definitely stands out the most.

“Great workout and posing with my coach Milos Sarcev. Accomplished a lot and checked off on everything for the future plans.”

Joe Mackey At A Glance

He has achieved a lot in his career, but winning either the 2022 IFBB Tampa Pro or the 2022 IFBB Texas Pro would definitely be his greatest achievement. Up until now, his career highlight has probably been getting his pro card at the 2016 NPC Nationals. Joe has since taken part in five IFBB Pro shows, but has not won any of them.

Despite his passion for bodybuilding, Joe Mackey is also gifted when it comes to strength. Most notably, Mackey is one of the greatest deadlifters ever, having pulled over 800 pounds (363 kilograms) on numerous occasions. Joe also displayed his prowess at C.T. Fletcher’s 2022 Iron Wars VI.

It seems that now is the right time for Joe Mackey to win a pro bodybuilding show. Over the past few months, Mackey has made significant progress in his training with Milos Sarcev, and now has an overall versatility that makes it difficult to overlook his chances of success. There is a reasonable possibility that Mackey will qualify for the 2022 Mr. Olympia.