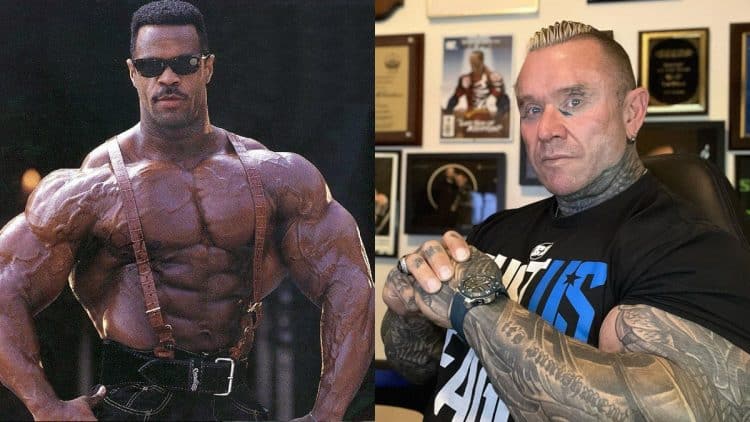 Lee Priest made a name for himself in bodybuilding with incredible arms and detailed conditioning. In a recent YouTube video, Priest opened up about some of the compounds he used during his lengthy tenure.

Leading a career that took place from the 1980s to the 2000s, Priest’s consistency made him difficult to contend with on stage. The bodybuilder competed against some of the sport’s most notable athletes, like eight-time Mr. Olympia Ronnie Coleman, Flex Wheeler, and Shawn Ray. While he was never able to capture a Sandow trophydillett, Priest managed to qualify for the prestigious Olympia event a number of times.

Before sailing off into retirement, Priest won three shows starting with gold at the 2006 Iron Man Pro. After capturing the title at the Night of Champions show in New York next, he earned the final victory of his career at the 2013 NABBA Mr. Universe competition. Due to his brash and outspoken nature, the Australian native was banned from the IFBB Pro League at one point but has remained vocal in the bodybuilding community, nonetheless.

Priest has redirected his focus on a physique transformation recently. He admitted that his diet hasn’t been too extreme and recommends anyone learning from him not to overthink things when it comes to dieting or cycles. Specifically, Priest made it clear that he’s using 300 milligrams of synthetic testosterone weekly. According to the 50-year-old, he found it difficult to push excessive amounts of gear during his prime.

Lee Priest on Steroids Throughout Career: ‘I Never Used Much Gear’

In a recent video with Fouad Abiad, Priest opened up about his contest cycles and added that diet played a significant role in how he absorbed the compounds.

“That’s why I never used much gear. It’s like even taking test, people would always say I was lying. If I used sus 250, let’s just say it’s 250, I take two mill, which is 500. When I took sip I took 400. You remember Trevor from Nuclear Nutrition? Big Guy. He was really into the heavy training.

He was mid 300-pounds. He said Lee, ‘imagine if you took more?’ I said, ‘okay.’ I took 800 milligrams and felt like shit! It’s hard to describe, you know when you’ve been eating clean, and you eat bad food, and you feel sort of toxic and shit. Well, that’s how I felt.” Lee Priest explained.

Priest maintained that his cycle during the 90s would cost around $1800. He also doubted the efficacy of human growth hormone at the time.

“I went back to the small dosage and when I was getting ready for the Iron Man and the Arnold in the same frame, my whole cycle probably cost me $1800 because I did growth twice my whole life, 94’and 96′. I’ve never done it since. I’m thinking now I’m 50, thinking now it will maybe work. My first growth I took two IUs and four and of course I was around 22 and 24, and thought maybe because I’m young I didn’t notice it. I said, ‘fuck, I’d rather spend the money on Winstrol or Stanisol, I know how that works.’

Winstrol and Stanisol were popular steroids during his time as an active pro.  Priest ultimately decreased his dosages of both and mentioned that he stayed in ‘pretty much the same shape.’

“Then, even when it came to Winstrol and Stanisol, everybody is like ‘you gotta take it every second day and water based and shit,’ so many times I put it in my shoulder and the needle a bit and I’m like, ‘fuck it’ and just squirt it down the sink. Then I had the bottle down, and I look at the bottle and it says two mills for 100 kilos every two weeks for a horse. I’m like if a fuc**ng horse needs two mills every two weeks, why the fu** am I taking one mill every second day? So I started using it every fourth day. I was pretty much in the same shape.”

Before a contest, Priest revealed that he would sometimes use Dianabol, Anadrol 50, Clenbuterol, and T3.

“My cycle for a contest would sometimes be back then, I’d say sus 250, I take a mill or two mill a week maybe one Dianabol a day or Anadrol 50 or Clenbuterol or T3 before a contest. People were like how can you take Anadrol and D-Bol, it holds water. I said, ‘if you’re eating clean’ then it doesn’t really.

Off-season it does because it’s the shit food you’re eating with it that holds the water. I’ve always been honest, that would annoy me, because I told people ‘listen, if I took 1000 or 2000, guys, I talk about my sex life, you think I’m going to lie about fuc**ng steroids?'”

The bodybuilding veteran believes a body can’t make use of excessive amounts of gear. Lee expressed concern over kids in England now taking upwards of five grams of testosterone weekly.

“I think I even said towards the end, rest in peace, Bostin Loyd, he even came to the conclusion that he didn’t need that much shit that he took over all those years. Your body can’t use it. Yes, some do go higher. I’ve been to England and done seminars and some of the young kids over there, some are taking five grams of test a week. Where the fu** do you put this? The only guy benefitting is the guy you’re buying it off of. He’s making a fortune.”

Priest Tells Story About Paul Dillett’s Cycle: “He Loved Clen More Than Anything”

Priest remembered living with Paul Dillett after the veteran bodybuilder left his wife. He stayed with Priest for eight months and they both learned about each other’s cycles. Lee said that Dillett’s favorite compound was Clenbuterol by far.

“This is the funny thing, when Paul Dillett left his wife, he lived with me for eight months. We’ve all heard the rumors, Paul is this genetic freak, he’s going to be taking shit, but we would be the same, we’d sit on the couch. He loved Clen more than anything. He’d go, ‘hey son, turn the air up,’ he goes, ‘I’m burning up.’ He’s sweating from the Clenbuterol because he hated doing cardio.

There was this shitty fruit bowl sitting on the coffee table, we load up a syringe each and put it there. He asks, ‘have you had your shot yet?’ I said, ‘no, I can’t be bothered.’ And he’s like ‘me neither.’ And he’ll be sitting there for days and like I said, the most I ever saw Paul take of growth, the most ever was 16 IUs because he just handled the thing once, and goes, ‘fu** it.'”

Before Dillett took his talents to the Iron Man show back in the 90s, Priest remembered a funny story about the bodybuilder flying a lady out to accompany him during prep. As Lee walked by Dillett’s room, he noticed Dillett was passed out naked, getting his body shaved by the woman he flew out to visit him.

“I remember he flew some girl in, I walked upstairs. I had to pass his room to go to my room. He’s snoring he’s head off, and I’m like what the fu** did I just say. This was just before the Iron Man shows.

Here is Paul fuc**ng laying spread out on the bed, no clothes on. The fuc**ng poor girl that he’s flown in sitting on the edge of the bed with a bucket of water shaving him while he’s fuc**ng sleeping. I’m like you lazy fuc**ng cunt.”

Priest dismissed the idea of returning to a bodybuilding competition despite Olympia executive Jake Wood saying Masters Olympia could return ‘definitely by 2023.’ The bodybuilding veteran said that if the show allows for 50+ older athletes, then he will definitely consider it in the future.

Given the health concerns that continue to affect the sport, Priest is bringing excessive steroid use into the limelight. Bodybuilding legend Arnold Schwarzenegger is also attacking the issue in his own way. He called bodybuilding ‘the most dangerous sport in the world’ and believes athletes are taking things too far nowadays.

Lee Priest is keen on enjoying retirement, but surely his experience and knowledge surrounding steroids are welcome to many athletes on the rise. While Priest used three or four compounds during his prime, as of late, he’s been sticking with 300 milligrams of testosterone weekly.

How Much Does A Deadlift Bar Weigh?