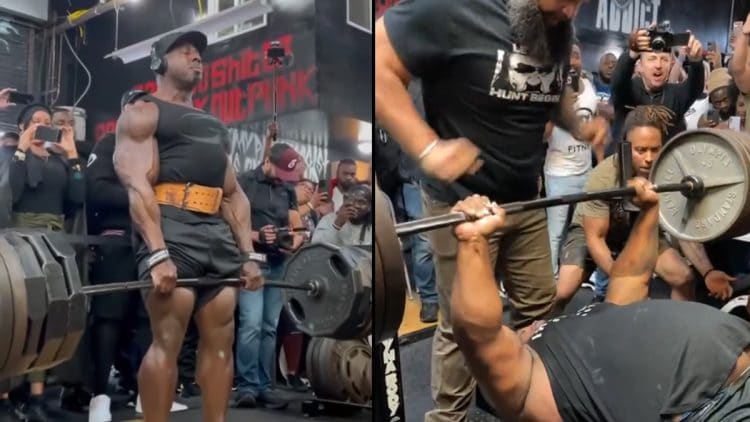 The Iron Wars VI finally took place four months after C.T. Fletcher originally delayed it from happening in January 2022. The competition took place on May 20, at the IRON ADDICTS GYM in California. A world-class field of strength athletes participated in this year’s contest, and it justified its reputation. The most notable mentions in 2022 were the greatest bench press powerlifter in the world, Julius Maddox, and the strongest deadlifter in the professional bodybuilding community, Joe Mackey.

Although both Maddox and Mackey are currently preparing for something else, both performed incredible lifts at Iron Wars VI. Joe Mackey annihilated an 850-pound (385.5-kilogram) deadlift, as well as 21 reps of 500 pounds (226.8 kilograms). While Julius breezed through a 700-pound (317.5-kilogram) bench press triple.

Mackey recently burst onto the scene with a massive 900-pound deadlift, which is unofficially the heaviest done by an IFBB Pro. However, he started out his Iron Wars VI performance by pulling 850 pounds, then after a rest, he did grueling 21 reps with 500 pounds. Joe used a lifting belt and straps to aid him in both of his feats of strength.

“After doing 850 lbs last night, I was a bit gassed out, but I went ahead and repped out 500 lbs for 21 reps to really represent Texas.”

Julius Maddox has come to perform at the Iron Wars VI just a couple of days after scoring a 796-pound (361-kilogram) bench press in training. It is a well-known fact that Julius intends to become the first person ever to bench press 800 pounds raw in an official competition.

Only Danial Zamani pressed 800 pounds, and it was unofficial because it was in training. Zamani was supposed to go head-to-head with Julius Maddox at the initial Iron Wars in January, but after C.T. Fletcher rescheduled it, Zamani was nowhere to be seen.

Julius is now feeling better than ever, so he wanted to perform in front of a crowd and make a big show out of it. He ended up crushing a 700-pound (317.5-kilogram) bench press for three reps, but it seems like there was more in his tank. Both C.T. Fletcher and Julius Maddox are heard screaming “Real weight!” in the video.

Iron Wars VI seems to be one of the best seasons yet, despite showing some incredible feats of strength in the past years. C.T. Fletcher made sure that the right athletes get a chance to display their strength, and the incredible atmosphere in the gym undoubtedly helped them get motivated.

Joe Mackey is one of the strongest athletes in the professional bodybuilding community. The Men’s Open division standout boasts a...

Bodybuilder Joe Mackey is one of the most exciting veterans in the sport, since he is a man of many...

Joe Mackey is currently focused on bringing the best package to the upcoming shows and wants to demonstrate to others...