After a video surfaced of "Iron" Mike hitting a passenger on an airplane, Joe Rogan believes the man provoked the attack, "That's real simple, that dude was a douche bag". 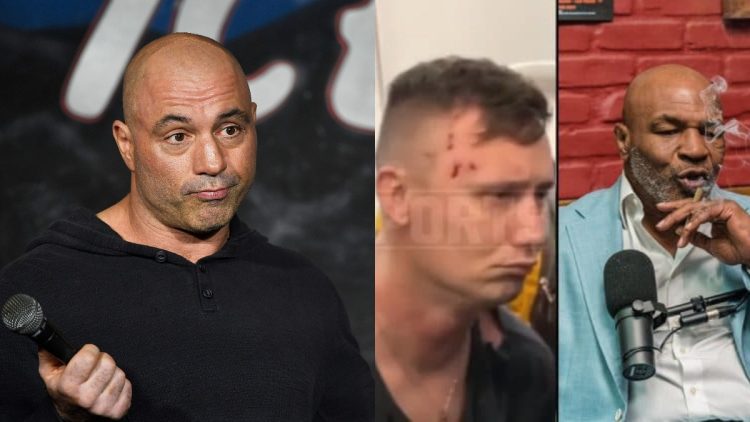 Mike Tyson took the internet by storm after unleashing a barrage of punches on an individual riding on an airplane last week. In a recent YouTube video, Joe Rogan reacted to the mayhem and believes the guy who prompted the attack earned a beating from the boxing legend.

As one of the most successful boxers to ever grace the ring, Mike Tyson has long been considered a legend of sport. He holds the record of having been the youngest boxer to win a heavyweight title. In addition, Mike is the first boxer in history to simultaneously hold the WBA, WBC and IBF titles. While he’s widely regarded for his combat skills inside the ring, it appears his skills outside the ring are also garnering a ton of attention.

During the video, the man is seen leaning over Mike’s seat before the boxing legend gave him a verbal warning. The man allegedly threw a water bottle at Mike which prompted Tyson to uncork a volley of punches to his face.

Joe Rogan, who operates the most popular podcast in the world, The Joe Rogan Experience, commented on Mike hitting the man, and defended the boxing superstar. In addition, the UFC color analyst mentioned that the guy in question provoked the attack and was clearly intoxicated on a ‘bunch of shi**’.

In a recent YouTube video, Rogan reflects on the altercation Mike Tyson had with a fellow passenger during their flight from San Francisco to Florida.

“That’s real simple, that dude was a douche bag. He was annoying one of the baddest motherfu**rs that’s ever walked the face of the earth. That’s so dumb. That’s not even kicking a beehive, that’s like headbutting a beehive.” Joe Rogan said.

Joe suggests that the man was intoxicated. In addition, he explained that the man punched by Tyson has a lengthy criminal history.

“If you find yourself and Mike Tyson’s reaching over the back of an airline seat and he’s punching you in the face, I think you probably earned it. I think you probably earned it. The guy was super annoying man. It’s like people get crazy. They think just because he’s Mike Tyson, he’s famous, he can’t just punch you but you’re annoying him. He’s going to just fuc**n hit you like a normal person would.”

While Tyson retired from boxing in 2005, he got back in shape and returned for an exhibition fight against fellow legend, Roy Jones Jr. in 2020. The bout resulted in a draw. Nevertheless, Mike maintains a busy schedule nowadays and runs a very successful podcast in his own right, called Hotboxin’ with Mike Tyson.

Despite the altercation, Rogan defended Tyson and believes people overstep boundaries with famous celebrities. After provoking Mike Tyson on an airplane, Joe Rogan believes the man who got hit probably earned it.