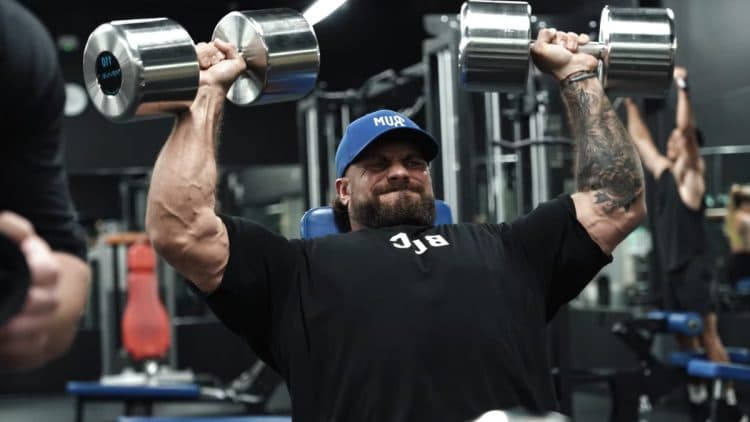 The three-time Classic Physique Olympia champion Chris Bumstead recently shared a shoulders workout. Bumstead is one of the most dominant champions in the Classic Physique division’s history and has won the title in 2019, 2020, and 2021. He will attempt to make it four in a row at the 2022 Olympia that is scheduled to take place from December 16th to 18th in Las Vegas, Nevada.

The 27-year-old dealt with a severe Covid-19 infection during the Christmas of 2021 and lost a significant amount of weight as a result. However, he quickly made the recovery and started making progress in the gym. Chris Bumstead is currently in the bulking phase and his off-season training to defend the Olympia crown is picking up pace. Recently, he went through the off-season shoulders workout and shared the video of this session on his YouTube channel.

At the beginning of the video, Chris Bumstead shared his pre-workout meal which consisted of:

Bumstead stated that he has reduced the amount of rice in his diet and said that his digestion has improved significantly with the addition of olive oil. Following the meal, he consumed the pre-workout shake and headed to the gym.

Shoulder press on the machine

Chris Bumstead started the shoulder workout with the converging shoulder press on the machine. It is a compound movement that primarily targets the upper pec and the front delts. In addition to that, the design of most shoulder press machines provides a natural path of motion to the arms and the placement of weights optimizes the starting resistance.

Chris Bumstead stated that he managed to complete the sets on this machine with four and a half plates in his previous shoulders session. He aimed to do the exercise with five plates if his shoulders held up. The 27-year-old finished the warm-up set with a single plate and slowly worked his way up to five plates for the working sets and performed a back-down set with three plates before moving on to the next exercise.

Taking no rest period after the first movement, Chris Bumstead jumped onto the seated dumbbell shoulder press immediately. Since his muscles were pre-exhausted with the machine workout, CBum took a step back in terms of weight and performed this movement with moderate weight.

“Pretty gassed from pushing that heavy on machine and then we come over here and do a little lighter weight maybe,” Chris Bumstead said.

Chris Bumstead performed a seated dumbbell press with 100lbs dumbbells and took to the next exercise.

Since Chris Bumsted’s shoulders were pre-exhausted with the shoulder press, he decided to wrap up the pressing movements for the day and focused on working with lateral raises for the rest of the session. He started with seated dumbbell side lateral raises. Dumbbell shoulder flys are an effective way to work the side delts. The seated variation eliminates the need to stabilize the core and isolates the target muscles to a greater extent.

Chris Bumstead performed all the sets of this exercise to failure with 40lbs dumbbells and jumped on to the next exercise.

The cable machine variation of side lateral raises has two primary benefits over the dumbbells variation. The machine eliminates the need to control the weight manually as the cable and the weights move along the fixed trajectory. Therefore the chances of injury are significantly reduced. Secondly, the muscle stays in tension in both positive and negative phase of the movement which brings about hypertrophy to a greater extent.

Chris Bumstead used extremely light weights for this exercise and focused solely on perfecting the form with slow and steady movements. The 27-year-old stated that this technique has helped him work around the shoulder injury. In Chris Bumstead’s own words:

“It’s also what I am doing to work around the shoulder injury. But I feel like considering I’ve been doing less weight and growing as efficiently as I was last year. It’s benefiting me the same as more weight but hurting me less. So I’m going to stick to this method for ever hopefully unless I become an idiot once again.”

Chris Bumstead performed three sets of cable side lateral raises and moved on to the next movement that focused more on the rear delts.

Chris Bumstead next performed two rear delt exercises, cable and pec deck reverse flye. Working the rear delts should be an important aspect of training as the muscles are essential in a lot of upper body and especially arm movements. Bumstead performed four sets of this movement and finished the shoulders workout.