Rogan sat down with Derek of MPMD to discuss Liver King being exposed and was not a fan of the apology video. 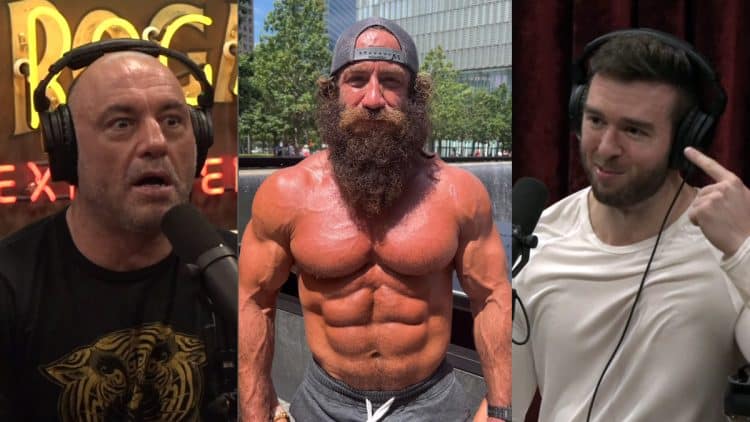 UFC color commentator Joe Rogan has one of the most influential voices in the world due to his massively popular podcast show. In the episode 1905 of the Joe Rogan Experience, Rogan sat down with Derek from More Plates More Dates (MPMD) to talk about the Liver King lie.

Internet sensation Liver King burst into the mainstream in the last year and a half because of his monstrous physique and unique eating habits. He preaches a natural lifestyle, which includes eating raw cuts of meats and organs, based on the nine ancestral tenets. His popularity skyrocketed after numerous clips of him consuming bull testicles, brain, liver, and other raw meat went viral on social media.

The 45-year-old quickly amassed over 1.7 million followers on Instagram. Although King insisted he was all-natural, many were not fully sold on the idea. Rogan took issue with his claims of being natty and did not hesitate to label King’s persona as a gimmick. He went as far as to say that Liver King had an a** full of steroids.

On Nov. 28, PED expert Derek of MPMD brought out the receipts to dismiss King’s natty status. He gave a look into the leaked email he received that exposed King’s blood work alleged steroid cycles. While that may not be ancestrally consistent, it also revealed King as a natural hyper non-responder. Derek claimed that King needed to take doses of GH (growth hormone) that were even higher than Mr. Olympia’s bodybuilders.

Liver King released a short statement to Rolling Stone after Derek’s video did rounds online. He stated that he was “grateful in a weird way” but did not directly respond to Derek or go into any further details. He later issued an apology on his YouTube channel admitting that he “lied, fu**ed up, and misled a lot of people.’ He opened up about his prior gear use and disclosed that he was still on the juice.

In a recent episode of the Joe Rogan Experience, Rogan hosted Derek of MPMD to give his take on the Liver King lie. As a longtime critic of King, Rogan was not surprised at the findings.

Rogan: “I wasn’t surprised at all. It completely makes sense but that’s exactly what I expected. There’s no way you can look like that, in your 40s, that jacked, I mean he’s preposterously jacked.”

Derek: “Most people could see through it but at the same time, a lot of big names reached out to me when the video came out and they were like, ‘I didn’t think he was natural but this guy literally right to my face would say blatantly I am natural.’ He was lying through his teeth seemingly.”

“The problem with this too is that a lot of people will extrapolate this out and then think everyone with a jacked physique must be doing something, which is problematic… I do believe that physique, maybe not that physique but within striking distance of that inn 0.00001% of individuals. You could get there naturally.”

Rogan and Derek were both not convinced by the apology video King uploaded and criticized his lack of sincerity in trying to help other people.

Derek: “He did cover the ab implant and etching again. He said no to both even in his apology. Personally I think they are legitimate abs. The etching thing I think is more of the controversial topic. Did he have some sort of cosmetic work done to target locally the fat around the abdominal definition.

His overall body composition is pretty consistently represented. The argument is they don’t change when he sits out and the separation is so dramatic it’s got to be something. You could never really say if it was well done.”

Rogan: “He wanted everybody that’s depressed and trying to kill themselves to reach their highest and most dominant form but he wanted to lie about how he achieved his physique. So, he mislead these people that by just eating liver you can come close to that.

As you fail at that as well as everything else you failed in life, which is allegedly the point of doing something to yourself that you are thinking of committing suicide.

“That was so theatrical and so corny.”

Related: Joe Rogan calls on The Rock to come clean about his steroid use

The recent developments in Liver King’s story have left many people wondering about the truth. Renowned powerlifter Larry Wheels recently chimed in on the exposé of Liver King, alleging that the email was leaked on purpose and it might be orchestrated by the man himself to get more traction online.