Joseph Baena showed off his physique through a series of poses usually performed by Classic Physique competitors. 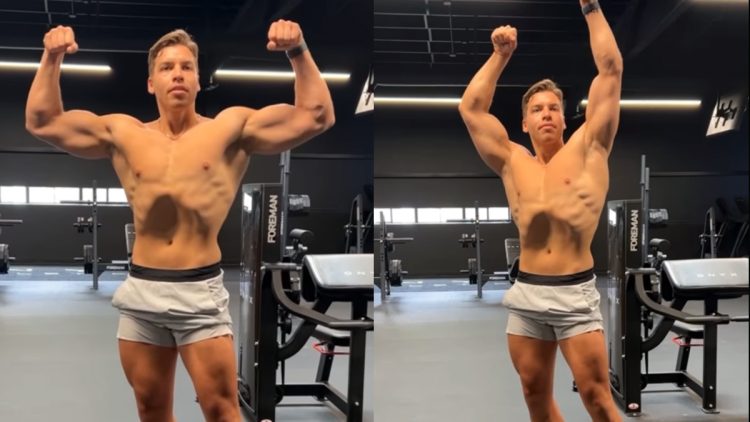 Joseph Baena has obviously inherited some stuff from his father, Arnold Schwarzenegger, one of which is his love for bodybuilding. However, bodybuilding requires an amazing work ethic, and Joseph definitely knows how to work hard. As a result, he is very proud to show off his physique and what better way to do it than to pose like his father.

Having a good physique is obviously most important, but knowing how to pose can make it look even better. Well, Joseph Baena has an incredible physique and has now proved that his posing is elite by sharing a video to Instagram.

Joseph Baena hit multiple classic poses, some of which were popularized by his father many decades ago. He started with a Front Double Biceps, which really accentuated the size of his arms, while his stomach vacuum looked impressive as well. Joseph transitioned to the Crucifix pose, then straight to the Victory pose, which was popularized by Sergio Oliva. His forearms, obliques, and overall shape looked amazing during this routine.

Joseph Baena then performed one of Arnold’s most famous poses, that was the Three Quarter Back pose. The resemblance between him and his father was uncanny, but again, it is expected that he masters this pose. To finish off his routine, Joseph Baena performed the Side Chest pose and displayed his massive arms and chest. Impressively, he held the stomach vacuum throughout the entire routine.

“Thursdays are for classic poses and classic songs.”

Joseph Baena’s poses looked incredible, but it was the smooth transitions from each to the next one that really made it a masterpiece. This even left elite bodybuilder, Regan Grimes, in awe. So he left a comment.

“These Transitions are money!!!🔥🙌” wrote Grimes.

Joseph Baena is not slowing down with his training despite having a really busy schedule. He is pursuing an acting career, so it is obvious that Arnold Schwarzenegger is his overall idol. His father was one of the greatest movie stars of all-time, while also being arguably the greatest bodybuilder ever. This fact does not frighten Joseph, but he instead uses his father as inspiration and looks up to him as a mentor.

Joseph Baena even trains like his father, as the book “The Encyclopedia of Modern Bodybuilding” has highly influenced his workouts. It was Arnold who wrote this book, and it is now working in favor of Joseph.

Joseph Baena’s genetics are unquestionably good, but it is nice to see that he is interested and working hard in hopes of continuing his father’s legacy. It will still be very hard to do, but the apple doesn’t fall far from the tree, and Joseph is proving to possess a lot of his father’s characteristics. He is very persistent and does not miss a lot of training days.

Bodybuilding veteran Rich Gaspari led a tremendous career that saw him reach the Olympia stage a number of times. In...