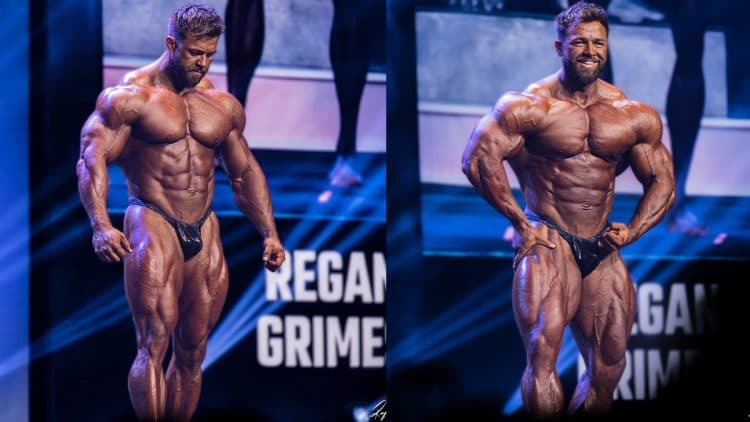 Regan Grimes has maintained a busy bodybuilding schedule for the past few years and has gained momentum quickly. Following consecutive seventh-place showings at the 2022 Arnold Classic and the Boston Pro, Regan will take time off from shows to prepare his physique for 2022 Mr. Olympia.

Regan has emerged as a serious contender following an impressive 2021 season. Last year, Regan managed to place fifteenth at Mr. Olympia and then followed it up with a second-place performance at the 2021 Legion Sports Pro. Following last year’s Olympia, teaming up with Milos Sarcev paid off after he was victorious at the 2021 Egypt KO Pro show, which earned him an invite to 2022 Mr. Olympia.

Entering the year with some momentum, Grimes came up short after placing seventh at the 2022 Arnold Classic. Then, a week later, secured seventh place again at the Boston Pro show.

The popularity behind Grimes has continued to grow, especially after starring in Generation Iron 3 alongside Kai Greene, Chris Bumstead, Dorian Yates, Hadi Choopan, and Brandon Hendrickson. While participation at bodybuilding shows will be on hold for now, Grimes is determined to bring an improved package to the Olympia stage in Dec.

Regan Grimes Explains Decision to Not Compete at Shows Until 2022 Mr. Olympia

Regan Grimes shared a video on his YouTube channel Monday and informed his fanbase that he will be taking time away from competition.

“Alright, so the show is over guys and the competition season is actually done for me. So I’m finished and I’ll be going into a different phase. If you didn’t know already, I am qualified for the Mr. Olympia so I will be competing in Dec. in Vegas. So that’s what’s next for me. I’m going to do a whole wrap-up video with Milos. I’m going to go downstairs and we are going to do that. So yeah, we’re going to cover everything, and go over how everything went, our thoughts, and what our game plan is moving forward.

I just want to say a big thank you to you guys for everyone who has supported me. Messaging me on Instagram, and the closer friends and stuff who text and message me, it means a lot. Yeah, it’s been a crazy year so far, so lots in store, lots of cool things coming up, so I’m really excited to share that with you. I’m going to be vlogging it, and bringing you guys along for the ride. So let’s do this.” Regan Grimes shared.

Just three months into the year and Regan has already prepared his physique for two big shows. Despite enduring hardships before kicking off his 2022 season, Regan is confident that taking time off with Milos to grow and practice posing will only make him tougher to beat at upcoming events. Looking back on his previous year in the sport, the two discussed prep from 2021 as well.

“Now we’re here and we’re just going to go over how the prep went overall. You know, right from finishing the season last year when we did Egypt, Reno, and Prague. A really good season there, we had. We are super happy with how that went. That was great.” Regan said.

Milos admits that Grimes had a busy couple of years in the sport. While some believe competing at too many shows can wear on an athlete’s ability to prepare their physique, Milos does not see activity as a burden, especially for a bodybuilder with a high ceiling like Grimes.

“We did Olympia also, so it was four shows back-to-back. A lot of people would of course, jump and tell you that you need rest, and you need a break but I was the first one to encourage you because I’ve done 72 pro shows. Even though Dexter passed me, no one else did as many shows as I during that time period. So I don’t see this as a burden, really I don’t but I’m looking forward to this time you’re going to have for Olympia.” Milos Sarcev added.

With nine months to prepare for 2022 Mr. Olympia, Regan has a chance to blow away some of the expectations that have been placed on him after back-to-back seventh-place performances. At least, Milos and Grimes have a plan of offense brewing, and it will be exciting to see what improvements Regan brings to the biggest show of the year.

As one of the younger Men’s Open competitors in the sport, Regan’s potential as a bodybuilder is sky-high. Focusing on a new phase of preparation, Regan’s choice to lay low until 2022 Mr. Olympia could end up being the best decision of his career.