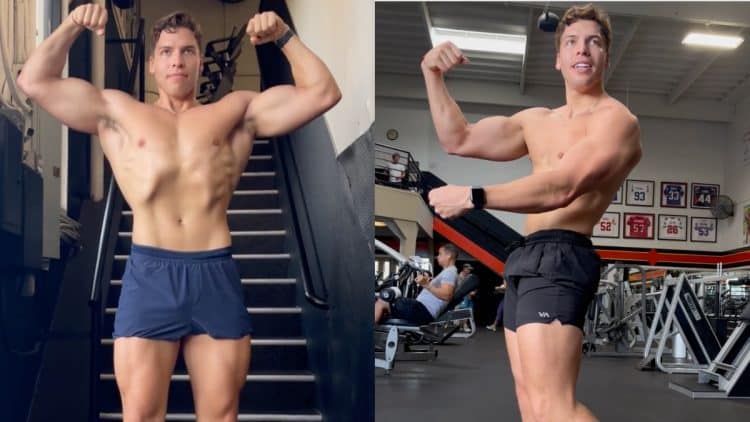 Bodybuilding legend Arnold Schwarzenegger’s son Joseph Baena is making his own name in the entrainment industry. In a recent Instagram post, Baena shared a physique update after competing on Dancing With The Stars for six weeks, where he looked leaner than before.

Joseph Baena first made headlines for his uncanny resemblance to his father after he reenacted some of Arnold’s famous bodybuilding poses. Fans were left stunned at how similar he looked to a younger version of the seven-time Mr. Olympia. Although Arnold never pushed Baena to get into bodybuilding, Joseph found his passion for fitness at a young age.

He regularly collaborates with other influencers and celebrities for training sessions. In August, Baena teamed up with bodybuilding veteran Mike O’Hearn to crush an enduring sleeve-busting arms workout. Both athletes shared their staple techniques and some of their favorite supersets to get ripped arms. The four-time Mr. Universe has maintained an impressive look for over three decades in the sport.

Baena and O’Hearn joined forces again for an ‘old-school’ back workout that was focused on building longevity. The 53-year-old boasts a shredded physique and continues to impress fans with his strong work ethic. He inspired Baena to utilize more old-school workouts that will keep him lifting in his old age.

Besides fitness, Baena followed in the footsteps of his father and started exploring acting. In September, he landed a role on season 31 of the competition television series Dancing With The Stars. Joseph shared a heavy shoulder workout that he utilized to get ready for picking up his dance partner at the show’s premiere.

In a recent post made on his Instagram account, Baena shared the change in his physique after six weeks of competing on Dancing With The Stars. He reported that he ended up losing 10 pounds in his time on the show.

“No one asked for it but I thought I would share the physique difference from the beginning of @dancingwiththestars to the end of it (6 weeks). First video(taken today): 195lbs. Second Video(taken 6 weeks ago):205lbs.”

Joseph Baena recently partnered with seasoned veteran Robby Robinson to work on his posing routine. Robinson is the inaugural champion of the Night of the Champions contest held in 1979 and has won both the Mr. Universe title and the Mr. America.

Along with O’Hearn, Robinson helped sharpen Baena’s posing skills. In addition to guiding him through different poses, Robinson provided him with tips for improving them.

About two weeks ago, Baena put on a leather kilt to recreate his father’s iconic look from the movie, Conan The Barbarian. He can be seen rocking out to a song from the film in his dressing room before stepping on stage to compete in the dance show. If his latest updates are any indication, Baena has no plans of slowing down and will continue working towards his ambitions.