Mike O'Hearn and Joseph Baena share some of their go-to techniques for building ripped arms. 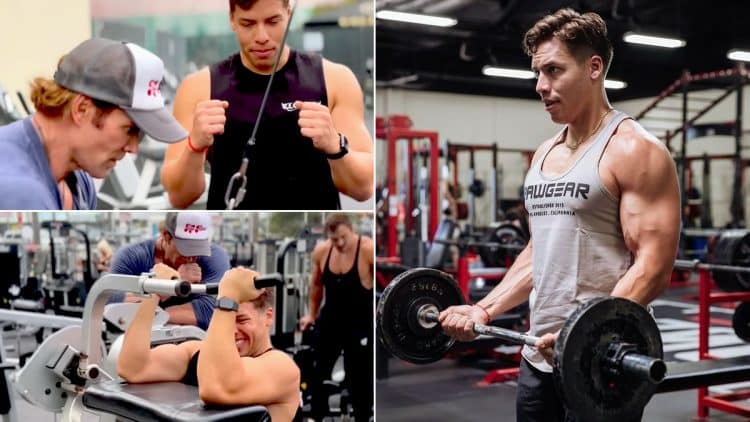 Arnold Schwarzenegger’s son Joseph Baena and bodybuilding veteran Mike O’Hearn have a solid understanding of the fundamentals involved in lifting weight. In a recent YouTube video, O’Hearn and Baena shared some of their favorite supersets for building huge arms.

Mike O’Hearn is a mutli-talented athlete with experience competing as a bodybuilder, strongman, and powerlifter. In addition to athletics, O’Hearn is a fitness model and actor, having graced TV shows like American Gladiators. He is 53 years old and revered for his incredible physique. As a four-time Mr. Universe winner, O’Hearn understands the finer details when it comes to working out.

O’Hearn has also proven himself as an impressive strongman competitor. He is celebrated for his aesthetics but continues to receive notoriety for his jaw-dropping strength. Mike has trained alongside four-time World’s Strongest Man Brian Shaw. The two performed a demanding workout designed to build fuller chests.

Joseph Baena, son of bodybuilding legend Arnold Schwarzenegger, is well known in the fitness industry and is following in his dad’s footsteps. In addition to reenacting some of Arnold’s famous bodybuilding poses, Joseph has a knack for acting as well. He has been featured in action films like Lava and Call of Duty: The Last Airshow. While he’s found success at a young age, Baena says that living as Schwarzenegger’s son has come with its fair share of challenges.

According to Joseph, he’s developed a healthy addiction to the gym. The young star joined forces with veteran Mike O’Hearn to demonstrate some of their favorite workouts for building Terminator-style guns.

Note: Reps were unclear based on the footage in the video

O’Hearn and Baena kick off the workout with a cable movement before supersetting with a dumbbell exercise.

“You’re first motion was instead of here all tight, you came back.” Mike O’Hearn said.

Joseph says his range of motion is better when the elbows are pointed down during triceps pushdowns.

“I want the elbows to be pointed straight down. Standing up, they can still be pointed straight down but you’re not going to get the full range of motion that you want. You want to be able to stand all the way, nothing hindering the extension. With the rope, you come down and try to separate them. You’re spreading the rope.” Joseph Baena told O’Hearn.

“A little cross body hammer action. It really gets the brachialis activated.” Baena said. “This is how we really get veins to pop.”

Mike slowed down his reps during this exercise.

“I slowed them down on the superset.” O’Hearn said. “It just gets the body out of the way and it’s just triceps by throwing it back and I love it.”

O’Hearn and Baena are surprised that so many people think cross body dumbbell hammer curls are ‘useless workouts’.

“The main reason I still do them is because I can feel the muscle at hand being targeted so well. For me, it doesn’t really make sense why so many people are like, ‘these are useless workouts,’ when I feel them, you know.” Joseph said.

Before moving on with the next superset, O’Hearn told Baena that he admires his father’s longevity. Schwarzenegger, who recently turned 75, hasn’t stopped working out in the gym despite getting older.

“75, and he [Arnold Schwarzenegger] still does behind-neck-presses. My point was, he’s 75 with healthy shoulders doing these exercises that 25-year-olds cry about. Mike said. “I want to be 75 and doing this and throwing the football and still working out. He’s doing that.”

O’Hearn suggests practicing dips because they are an ideal exercise for strengthening the joints.

“Now we’re using a moderate amount of weight, not the whole stack and letting the arm collapse so it’s a different position for the tricep and again, strengthens those elbows and those joints and everything. O’Hearn said. It’s a great exercise.”

After Baena practiced some preacher curls, Mike gave his thoughts on his positioning.

“You won’t see this on film but his whole body was relaxed, and it was just his biceps. He didn’t get into a strong position where he could stack it into complete isoloation on the biceps. So everything else is just relaxed now, and it’s just biceps.”

Mike O’Hearn demonstrated a set of preacher curls before Joseph tells anyone watching to make sure to squeeze and stretch the biceps for the best results. The two wrap up the workout after supersetting dips and preacher curls.

This isn’t the first time that Joseph and Mike have trained arms together. The two met up earlier this week and crushed a demanding workout. Afterward, they shared valuable insight about the mentality needed to push the pace inside the gym.

Given the wealth of knowledge O’Hearn has acquired throughout his life, his detailed approach to lifting weights is welcome to anyone looking to pump iron. After practicing some of their favorite arm supersets, O’Hearn and Baena value exercises that have synergy together.