Larry Wheels will aim to score some new TRT PRs in just two weeks from now. 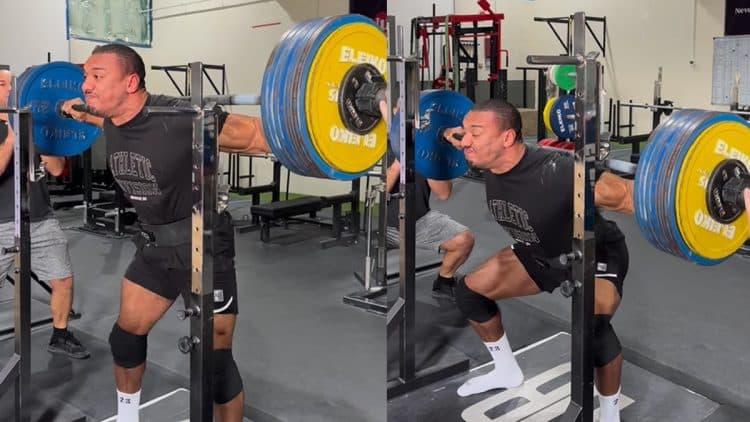 In the world of strength sports, Larry Wheels has earned a reputation for being one of the best all-around athletes ever. He has been tackling a new challenge, which is of great significance to him. Larry is working on testing his strength purely on TRT, which recently saw him perform a 300-kilogram (661-pound) squat for five repetitions. He shared the video on his Instagram page and announced some exciting news.

It is widely known that Larry Wheels has used performance-enhancing drugs (PEDs) and steroids from a very young age. However, due to many health risks and his self-awareness, Larry recently decided to discontinue the use of all performance-enhancing drugs except for Testosterone Replacement Therapy (TRT). This therapy is used to treat individuals whose bodies do not produce enough testosterone naturally.
Larry Wheels is loving life on TRT as he prepares to attempt One Rep Max in just two weeks from now. Judging from some other posts, like his 465-pound (210.9-kilogram) bench press, Larry will be testing all of his lifts. He will be able to see how much his strength has changed while also discovering his TRT Personal Records.

Larry’s decision to stop using PEDs, except for TRT, is a commendable one, as it demonstrates his priority towards health, as well as discipline, since maintaining his strength and physique is much harder now. However, even while he was on Steroids, Larry prioritized a healthy approach in taking them.

Larry Wheels has had an extremely busy year, filled with many ups and downs. He landed some massive PRs, but also injured himself a few times. Most recently, Larry injured his back while preparing for the 2022 Middle East’s Strongest Man.

Larry Wheels was hoping to find some success in the sport of Strongman similar to what he did in bodybuilding, powerlifting, and arm wrestling. However, stopping the usage of steroids and PEDs completely changed his way of thinking. Moreover, Larry Wheels looks much younger and healthier now than he did just a few months ago. Wheels is still humongous as he currently weighs around 114 kilograms (251 pounds), with the majority of it being muscle, as Larry is insanely shredded.

As Larry Wheels prepares for his one-rep max attempt using only TRT and tries to match his all-time PRs, it will be interesting to see how his strength levels change. In any case, Larry appears to be heading for a monstrous squat record.