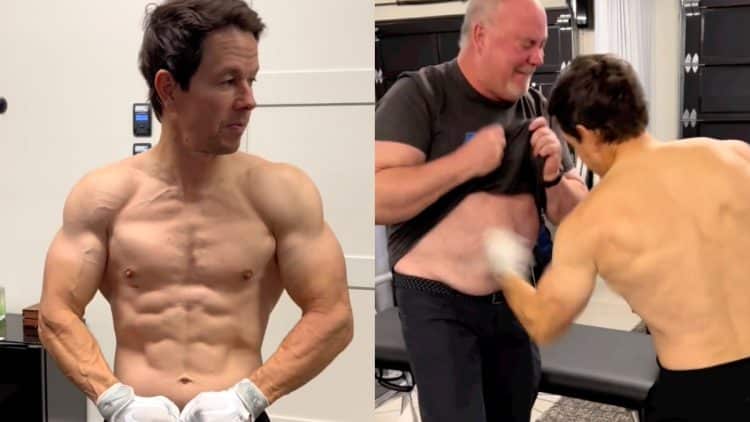 Mark Wahlberg boasts one of the best builds of any actor in Hollywood. In a recent Instagram post, Wahlberg showed off his ripped physique as he fired an uppercut at one of his training partners.

Wahlberg grew up with a passion for fitness and entertaining people. Although he is famous for acting in the movie industry, Wahlberg has dabbled in other areas, including music and television. He first made headlines for his iconic photoshoot with the fashion brand Calvin Klein in 1992. The project turned ‘Marky Mark’ into a bona fide fitness sensation.

Wahlberg’s name recongntion skyrocketed in the early 2000s when he starred in the big-studio featured films Planet of the Apes and The Italian Job. He follows a strict diet and training regimen that has allowed him to maintain his jacked physique for over three decades. He has more than 20.3 million followers on Instagram and regularly shares motivational content with his fans.

In May, Mark Wahlberg celebrated Cinco de Mayo online. He shared a brief clip showing him play virtual golf while boasting an incredibly lean build. Instead of a regular protein shake, Wahlberg swapped it out for a tequila shot in honor of the holiday.

He gave fans a look into his lower body training session recently too. The 51-year-old showed off his impressive quads while performing a grueling set of leg extensions using blood flow restriction (BFR) straps at the top of his hamstrings.

In a recent post uploaded to Instagram, Mark Wahlberg showed off his incredibly lean physique while going through a series of poses. Then, he proceeded to fire an uppercut at Tom Dowd, who co-founded the fitness lifestyle brand Perform with Wahlberg.

“Nobody was hurt making this video!! @bigdealdowd can handle it!”

Mark Wahlberg has shown no signs of slowing down anytime soon. He has a packed schedule, but he always finds the time to train when he can. He shared an inspiring update four months ago where he did two tough workouts in 24 hours. He started off by performing standing bicep curls as part of his warm-up before making his way to the F45 Gym for another grueling workout.

Two months ago, Wahlberg put his insane work ethic and discipline to the test with an early morning workout at the EōS gym in Temecula, California. Much to his surprise, the facility was packed even at 4 A.M. He praised two young gym-goers for making the right choice by hitting the weights on a Saturday morning instead of the bar the night before. Given his latest update, Wahlberg continues to show that age is just a number.