Wheels opened up about his past steroid use and its prevalence in other professional sports: 'there's even ways to get around drug tests.' 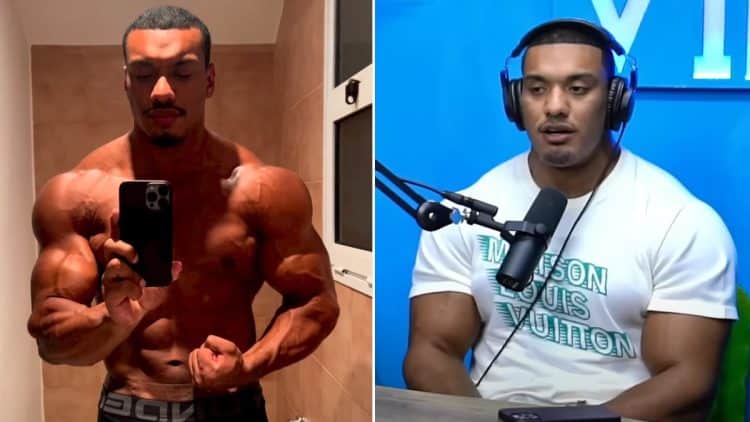 Larry Wheels on Steroid Damage (via VIBEZ and Instagram)

Larry Wheels’ vocal nature regarding steroid use always makes for some interesting conversations. On the Vibez YouTube channel, Wheels talked about his experiences using steroids and their prevalence in other professional sports.

“100 percent there are steroids in other drug-tested sports,” Larry Wheels said on a recent podcast.

As a multi-faceted athlete, Larry Wheels has tested the waters in powerlifting, strongman, arm wrestling, and bodybuilding. During the summer, all signs pointed to Wheels returning at the 2022 Middle East’s Strongest Man, but he was forced to withdraw after sustaining a back injury.

While on the sidelines, Wheels decided to stop taking performance-enhancing drugs/ steroids except for synthetic testosterone, via testosterone replacement therapy (TRT). Since switching to only TRT, Larry has informed fans of any physical/psychological changes to his body. So far, he’s mentioned there have been no dramatic fluctuations in his strength or moods.

However, the fitness star noticed substantial changes to his face. In October, he shared a side-by-side photo comparison, highlighting the aging effects of ‘peak’ steroid use. In the caption, he shared that his use of steroids aged his face, but luckily, he was able to reverse the ‘damage.’

Steroids and PEDs have become a topic of contention for some. To shed some light on this controversial matter, Larry Wheels discussed his use and its prevalence in other sports.

Larry Wheels Reflects on 10 Years of Steroid Use

Having been on steroids for over 10 years, Larry listed some of the noticeable differences between compounds.

“For 10 years [I’ve taken steroids]. Started my first cycle when I was 17 years old,” says Wheels. “I’ve been using since 17 and there are dozens and dozens of different compounds. Oral injectables, water-based injectables, you have orals as well that you take once a month, that you take faster, that are more potent and powerful. Then you have Growth Hormone, you have peptides.”

“It’s all clear as day to me after 10 years of experiences using them. At the moment though, I’m not taking anything but TRT (testosterone replacement therapy). And this puts me in the high normal range of a healthy natural male. Now, any damage I may have caused to myself from the 10 years of abuse with steroids — that remains in question.”

Note: Fitness Volt does not condone and/or recommend the use of recreational or performance-enhancing drugs. This article reports on information relayed by the athlete/subject. Fitness Volt is not a medical resource and the content provided to you is for informational/entertainment purposes only.

Are Steroids Common in Other Pro Sports?

According to Wheels, who has competed in a handful of disciplines, steroids and PEDs are everywhere. He added that athletes are capable of getting around drug tests in professional sports

“Honestly, if you want to compete at the highest level in just about any sport that’s physical, it’s almost necessary. Bodybuilding, Football, American football, everyone is using it right. Even sports that are drug tested, there’s ways to get around drug tests.”

“100 percent [there is steroid use in drug tested sports]. See, there are steroids that can stay in your system for months and then there’s steroids that are really powerful that can get in and out of your system in a matter of a few days. It’s not necessarily easy to pass a drug test, but it’s certainly do-able.”

Wheels on Truth of ‘Powerful’ Trenbolone: ‘It’s Arguably The Most Potent Steroid’

After examining some of the side effects caused by steroids, Wheels stressed how powerful Trenbolone is. In the past, he mentioned using the compound made his life a living hell.

“Most common side effects that you may have seen or heard of is severe acne. Maybe you’ll see a connect the dot situation on their back, face, or chest, anywhere on their body. You’ll see super low libido, or super high sex drive. It can work both ways it depends on how on top of your hormones you are.”

“There can be things like insomnia, increased aggression or irritability,” says Wheels. “I’ve taken Trenbolone, it’s arguably the most potent steroid you can think of, that I can think of. Anybody would agree if you’re taking it, it makes you borderline psycho. It’s extremely powerful you get very irritable. When you’re training, it’s great to have that kind of aggression.”

Wheels labeled Trenbolone as a super powerful compound that can cause its users to get irritable and very aggressive.

“Jokes aside. It is super powerful and it 100 percent can make you very irritable and very aggressive. When you hear cases, there’s not many of them, but in America especially, there’s men on steroids killing their wives. You do hear of some cases like that. I do think there’s more to it than just the steroids. I think it comes down to individuals as well.”

In one of his latest projects, Wheels compared his physique using 175 milligrams of weekly testosterone versus using around 500 milligrams. Despite allegedly quitting all steroids, Wheels looked jacked in both pictures and mentioned his pumps have been better than ever.

He also tested his power in the company of bodybuilding legend Ronnie Coleman. During his tenure, Coleman was one of the strongest bodybuilders to ever take part in the sport. Some of his most notable lifts saw ‘The King’ crush an 800-pound deadlift double as well as his famous 2,300-pound leg press.

Larry Wheels hopes these honest conversations will guide younger athletes making their way up the ranks. After using gear for 10 years, Larry accepts that the practice is a ‘necessary’ part of most professional sports, if not all of them.

RELATED: Larry Wheels and Influencer Jesse James West Challenge Each Other to Lift a Total of 100,000 Lbs in 60 Minutes