Larry Wheels is down to 114 kilograms (251.3 pounds) of bodyweight, but is still even stronger than he looks. 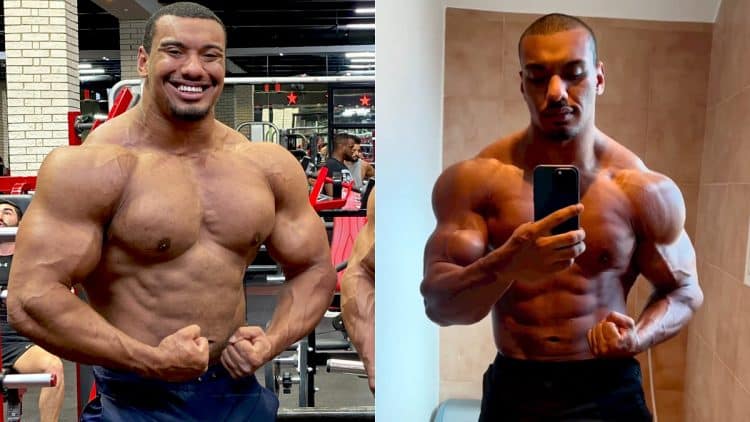 Larry Wheels has made a name for himself as an all-around fitness freak, having built an incredible physique and constantly shared unfathomable feats of strength. Now, despite downsizing from his previous weight, Larry is arguably more shredded than ever, which is seen in his most recent Instagram post. Larry’s chiseled muscles and defined biceps are on full display, with his veins popping out very nicely. One of the most impressive features of his physique are his well-rounded shoulders, which have an uncanny resemblance to cannon balls.

It’s no secret that Larry Wheels has used steroids and other performance-enhancing drugs (PEDs) throughout his career, but that is no longer the case. While preparing for the 2022 Middle East’s Strongest Man competition and encountering some injuries, Larry decided to stop using PEDs. He is now only on testosterone replacement therapy (TRT), as his body is no longer producing the hormone at natural levels.

Despite the changes to his routine, Larry is still determined to test his strength. In one month’s time, he plans to test his one-rep max PRs in bench press, squat, and deadlift in order to see how much progress he has made. Larry currently weighs 114 kilograms (251.3 pounds).

“My best lifts at this bodyweight are”

“What do you think they will be in a month when I test them while on TRT?”

Another benefiting side effect of Larry Wheels’ altered approach to using PEDs is that he looks much healthier and younger than he did before. Larry already pointed this out in a side-by-side transformation post at the start of his TRT journey, but his shape has gotten even better since then.

Although he has lost a substantial amount of bodyweight, Larry Wheels is still as heavy, or perhaps even heavier, than some professional bodybuilders. This is impressive considering that his body fat percentage is very low, which means that he is carrying around a large amount of muscle mass. Obviously, Larry has tested his abilities in bodybuilding, having competed in shows and even won the 2018 NPC Gold Coast Muscle Classic.

As one of the best powerlifters in history, Larry’s move to bodybuilding was not particularly difficult since he already had an impressive physique from years of heavy lifting. He competed from 2013 until 2020 and accumulated 16 sanctioned appearances in that time period. Larry won 11 of those, but more remarkably set numerous All-Time World Records in the process.

For the past few years, Larry Wheels has been considerably dedicated to arm wrestling, having done a significant amount of matches against some of the greatest athletes on earth. Notably, Larry beat the 2017 World’s Strongest Man, Eddie Hall, in an arm wrestling match, which they agreed to do in order to settle their beef.

Overall, it’s clear that Larry Wheels dedication to fitness and his impressive physique are still intact. He may have downsized and changed his approach, but Larry could still be a very formidable competitor in every sport he decides to do. However, for now, Larry will be focusing on increasing his strength to test the three foundation lifts in one month from now.