Larry Wheels enjoying life on Testosterone Replacement Therapy, as he is seen blasting through five reps of a 465-pound bench press. 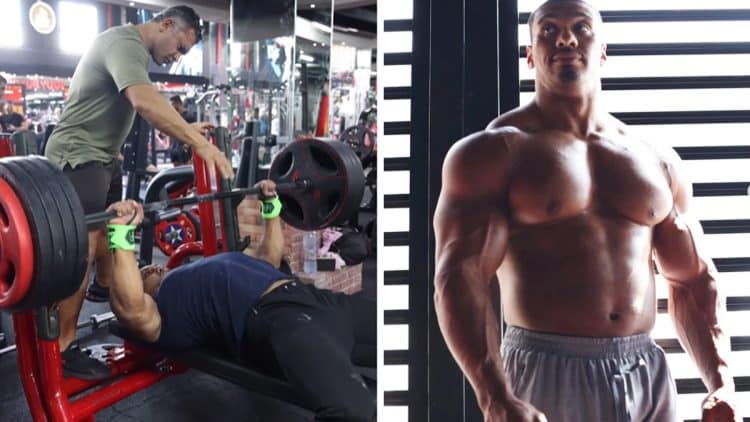 Larry Wheels is clearly increasing the strength of his foundation lifts, since he performed a massive 305-kilogram (672.4-pounds) six-rep squat just a few days ago and now shared a recent bench press set. Larry’s interest in these lifts has spiked up after he decided to stop using Steroids and PEDs, as he is just utilizing the Testosterone Replacement Treatment (TRT). Despite Wheels’ desire to cease using everything, he was unable to produce any testosterone in his body. Since Larry is not using substances that would significantly enhance his performance, he wishes to see how strong he can become without them. One of the most crucial strength tests is the bench press and he recently crushed five reps of 465 pounds (210.9 kilograms).

Larry Wheels completed all five reps of the 465-pound (210.9-kilogram) bench press with impeccable form and full lockouts. He also only used wrist wraps to aid him in the lift, which would make this feat of strength raw by powerlifting standards.

Another exciting thing is that Larry announced a bench press one rep max attempt in one month from now, which will display his strength off Steroids. Judging by this five-rep bench press set, Larry could definitely put up a colossal one rep max, which could possibly be even upwards of 550 pounds (249.5 kilograms).

Larry Wheels’ decision to just use TRT and stop the consumption of any other performance enhancers came shortly after he injured his back. Wheels was preparing for the 2022 Middle East Strongest Man, but he put his Strongman ambitions on pause for an indefinite time period. In spite of this, Larry has seen tremendous benefits from eliminating all steroid use from his system, as he looks much younger, and rejuvenated. His physique has downsized, but Larry is still very huge and shredded.

Larry Wheels has always wanted to advise people on taking a healthier approach to performance-enhancing drugs, with his TRT journey being one of the best pieces of evidence that the human body is capable of incredible things without the assistance of Steroids.

Wheels is still venturing out to many sports and keeping his options open, as he has progressed significantly in the sport of arm wrestling during the past few years. However, it seems that Larry is still getting used to the new regiment, which means that he will probably continue getting stronger as time passes.

In only one month from now, we will get the first adequate comparison as to how much Larry Wheels’ strength levels have changed from using Steroids to being on TRT. Even now, he is performing multiple repetitions using weights that are beyond the comprehension of most people. So, his one-rep max bench press will definitely be something worth paying attention to.