Larry Wheels loaded 305 kilograms (672.4 pounds) and attempted to squat As Many Reps As Possible. 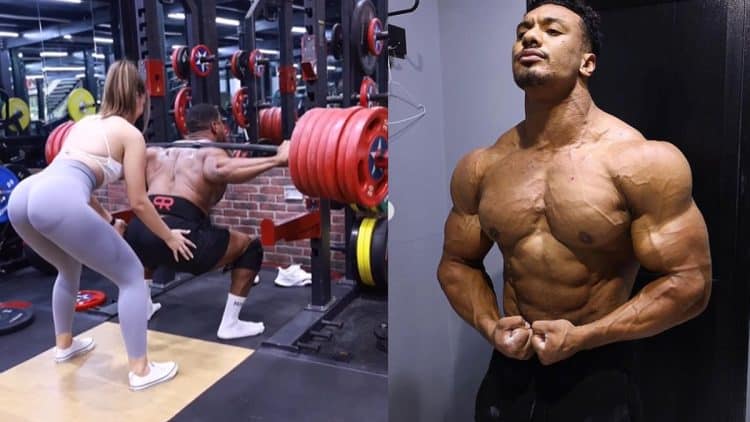 Larry Wheels decided to stop using steroids and performance-enhancing drugs (PEDs) altogether a few months ago, though testosterone is the only exception to this rule. Due to his body’s inability to produce testosterone on its own, Larry began his TRT (Testosterone Replacement Therapy) journey. Even so, Larry’s physique and strength levels changed drastically, but this only motivated him to push himself harder. Most recently, Larry posted a video to Instagram which saw him squat 305 kilograms (672.4 pounds) for six repetitions.

Larry Wheels actually attempted to perform As Many Reps As Possible (AMRAP) with 305 kilograms (672.4 pounds), which he indicated in the caption of his post. The way Larry approached his sixth rep, taking a deep breath before dropping down, also indicated that he performed the most reps he could.

Larry used a lifting belt and knee wraps to assist him in completing the six reps with 305 kilograms (672.4 pounds). He was also seen performing the six reps in his white socks.

“672/305kg AMRAP on TRT. @sejladjakovac made sure I activated my glutes properly!”

Wheels has been experimenting with his weekly testosterone dosage, starting with 175 milligrams then switching to 500 milligrams. For anyone wondering how big of a difference the dosage makes, Larry posted a side-by-side physique comparison.

Regardless of how much testosterone he takes, Larry Wheels is looking much healthier and even younger than he did while taking steroids and other PEDs. However, Larry’s usage of those steroids and PEDs undoubtedly helped him become the best in almost anything he did.

Larry first built a name for himself in the sport of powerlifting, having claimed multiple All-Time World Records and prestigious titles. He competed from 2013 until 2020, which saw him take part in 16 sanctioned competitions and win 11 times. From powerlifting, Larry eased his transition to bodybuilding. To no surprise, he found immense success in this sport as well, as he also won the 2018 NPC Gold Coast Muscle Classic show.

In recent years we saw Larry Wheels take up an interest in arm wrestling. He started from scratch and slowly built up his abilities to the point where he is once again competing against the best in the world. As if that was not enough, Larry has massive Strongman ambitions for this year, but after suffering a couple of injuries he decided that his health should be the priority.

Once Larry Wheels announced that he was only going to use TRT, he also stated that he would need to work extremely hard to not lose too much of his strength. It seems that his plan has worked out, as Larry is still one of the few people in the World who are able to squat 305 kilograms (672.4 pounds) for multiple reps.