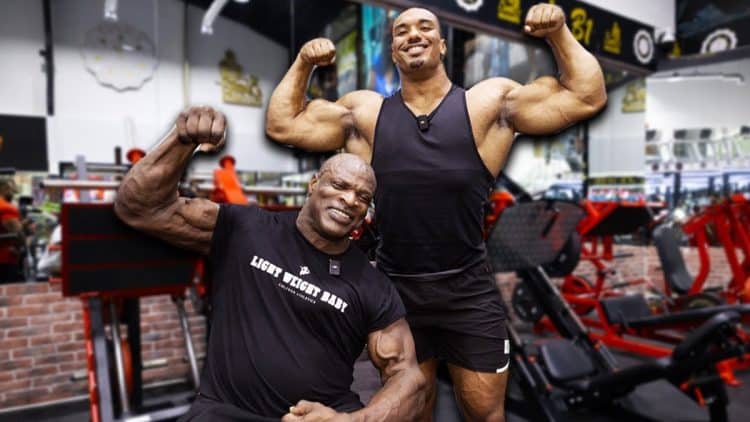 Powerlifter Larry Wheels is known for his incredible feats of strength. In a recent video, Wheels tested his abilities with bodybuilding legend Ronnie Coleman, practicing safety bar squats and reps on the plate-loaded leg press machine.

Coleman is widely regarded as one of the strongest bodybuilders to ever take part in the sport. His deadlift, squat, and leg press strength rivaled other high-caliber powerlifters. Aptly named “The King,” Coleman demonstrated near superhuman strength on a number of occasions. Some of his most popular lifts include his deadlift of 800 pounds for two reps as well as his infamous 2,300-pound leg press.

Wheels has practiced a number of sports in addition to powerlifting. Despite his young age, he’s tested the waters in bodybuilding, strongman, and arm-wrestling. While his plan was to compete at the 2022 Middle East’s Strongest Man competition, he was unable to attend after injuring his back.

In the meantime, Larry continued his efforts in the gym and discussed his recent decision to stop taking steroids. Specifically, Wheels revealed that he stopped all cycles and is strictly taking testosterone replacement therapy [TRT] now. He has already tested his strength since stopping gear, and the results were quite impressive.

Wheels immediately noticed changes to his body and gave fans a physique update one month into using only TRT. He made headlines after sharing side-by-side comparison photos of his face following ‘peak steroid abuse.’ The results left many in shock considering the stark differences in his face. For his latest venture, Larry Wheels met with bodybuilding legend Ronnie Coleman, who was also known for his jarring strength during his prime.

To begin the demonstration, Larry shared how he plans on approaching the workout with Coleman.

“I do some dynamic stretching [to start]. So, before I do squats, I try not to pre-fatigue my muscles. Very different from how a bodybuilder would do that. I don’t want to do quad attention first, or maybe hamstrings.

Pre-fatigue the muscles and then do a heavy compound movement, but I like to start off with that so I can preserve my strength and energy,” Larry Wheels said.

Coleman specified that he stretched for around 30 minutes during the height of his career. He added that these measures helped immensely with flexibility on stage.

“We’ll try for 800 [pounds] today,” Coleman said. “Yeah I used to do a lot of stretching, like thirty minutes. Well see, I was doing full splits on stage at 300 pounds. You gotta do a whole lot of stretching.”

Before proceeding, Wheels puts on a weight lifting belt. Larry warmed up with a 425-pound safety bar squat.

“Light weight. Yeah buddy. You got this. Ain’t nothin’ but a peanut.”

For the next round, Wheels tested his strength with a 510-pound load, which he performed for a single rep.

Wheels gets in position, and performs another squat, only this time he’s totaling 600 pounds for 14 reps.

Wasting no time, Wheels moves to the plate-loaded leg press machine next. He started at 1,000 pounds and performed eight reps. Following the set, Larry opted to rest for a minute before crushing 1,180 pounds for reps.

“At the time, when you did 800 in squats, were you doing splits as well?” asks Larry.

Wheels brought up a time when Coleman said he had no regrets about how he handled his bodybuilding career.

“I remember I was watching that video [of you], if you had any regrets and you said, [you did] because you didn’t go for more reps,” Wheels told Ronnie.

After taking a rest period, Coleman couldn’t believe Larry when he told him that Andrew Jacked is 38 years old.

“I thought he was 20-something. What… damn. Holy Moley, I would have never figured that out.”

As a result of his impressive strength, Coleman knighted Larry Wheels with his walker.

“We had a massive workout with my buddy Larry Wheels. I want to thank him for inviting me over here at B1 Gym in Dubai. We had a great leg session. Larry here is the strongest guy I probably know now. One of the most impressive guys out today. One of the strongest guys out there today. Kind of like how I was back in the day,” Coleman said.

Despite no longer competing, Coleman still keeps up with the sport and its rising talent. When he discussed the Men’s Open lineup for 2022 Mr. Olympia, Ronnie doesn’t see much changing from last year. He believes the two-time reigning Mr. Olympia Mamdouh “Big Ramy” Elssbiay will not only win this winter but will hold on to his title for the next three or four years.

RELATED: Larry Wheels and Trystin Lee Join Hands In Dubai For A Shredded Back Workout

In addition to hitting a new PR, Wheels proved himself in the company of a respected legend. Even though Larry isn’t taking a traditional cycle, his strength doesn’t appear to be going anywhere anytime soon.

Nick Walker to Bodybuilding Legend Flex Lewis : “I Will Be 2022 Mr. Olympia Without A Doubt”