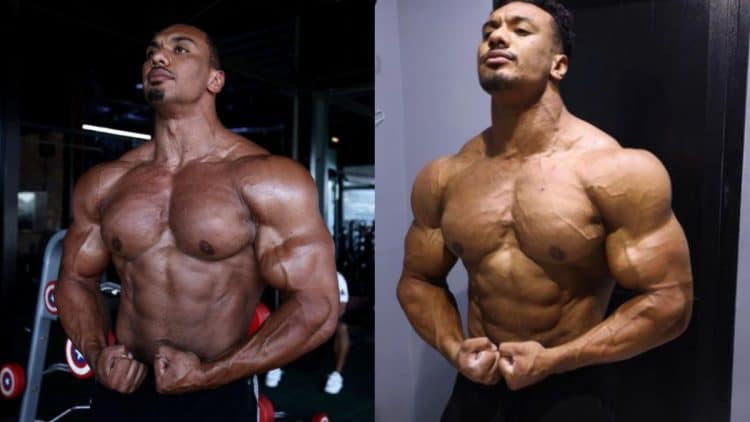 In August, powerlifter Larry Wheels publicly announced that he was stopping all performance-enhancing drugs except testosterone. On Instagram recently, Wheels posted a shocking physique comparison of when he used 175 milligrams of testosterone versus 500 milligrams.

In addition to powerlifting, Larry Wheels’ brute strength translated to other sports. He has taken up bodybuilding, arm-wrestling, and strongman. Earlier this year, Wheels planned on returning to a strongman competition at the Middle East’s Strongest Man but was unable to attend due to an injury.

Over the last several months, more bodybuilders seem to be dying, which has prompted concern from younger athletes like Larry Wheels. Prioritizing his health, Wheels openly discussed his experiences taking steroids in the company of fitness influencer ‘Joesthetics.’

Larry clarified that Insulin was an incredibly common drug used during his time in bodybuilding. He also mentioned that his strength and mood haven’t ‘fluctuated’ since changing to purely testosterone. In the past, Wheels talked about using other drugs like Trenbolone and said it was as a ‘living hell.’

The last time Wheels shared a side-by-side photo post, he highlighted how ‘peak steroid abuse’ made his face look older. For the latest comparison, Wheels showed off his physique using 175 milligrams of testosterone versus 500 milligrams (presumably per week).

Note: Fitnessvolt does not condone and/or recommend the use of recreational or performance-enhancing drugs. This article reports on information relayed by the athlete/subject. Fitnessvolt is not a medical resource and the content provided to you is for informational/entertainment purposes only.

In a recent post made on Instagram, Wheels highlighted the differences in his physique while using a heavier dose of testosterone. As can be seen in the second photograph, his traps, overall vascularity, and shoulders appear to be fuller.

Since switching to strictly TRT, Wheels continues to show off his downsized physique and healthier look. Despite quitting steroids, he still pushed the limits of his strength recently.

Wheels met with eight-time Mr. Olympia Ronnie Coleman to test his squat and leg press power. Coleman is widely regarded as one of the strongest bodybuilders to ever throw on a pair of trunks. By the end of the workout, Wheels earned Coleman’s utmost respect and was knighted by the bodybuilding legend.

And Larry isn’t the only athlete who switched to testosterone as of late. Coleman’s successor, four-time Mr. Olympia Jay Cutler announced his plan to transform his physique for a ‘fit for 50’ challenge. Cutler added that he’s ‘truthfully’ taking 200 milligrams of TRT weekly.

While pursuing his fitness goals, Wheels crossed paths with online sensation Tristyn Lee for an intense back workout. Following the training session, Wheels and Lee practiced posing together. Whether he’s training in the company of someone or alone, Wheels doesn’t miss an opportunity to measure his strength. One of his last training sessions saw him impressively squat a 495-pound load for 15 reps.

The changes to Wheels’ physique were evident while taking varying doses of testosterone. He may have stopped using all steroids, but Wheels continues to get massive pumps at the gym with just TRT.