While enjoying dinner with his wife in Dubai, Martyn remembers when Iranian Hulk and a group of men surrounded his hotel room ready to throw down. 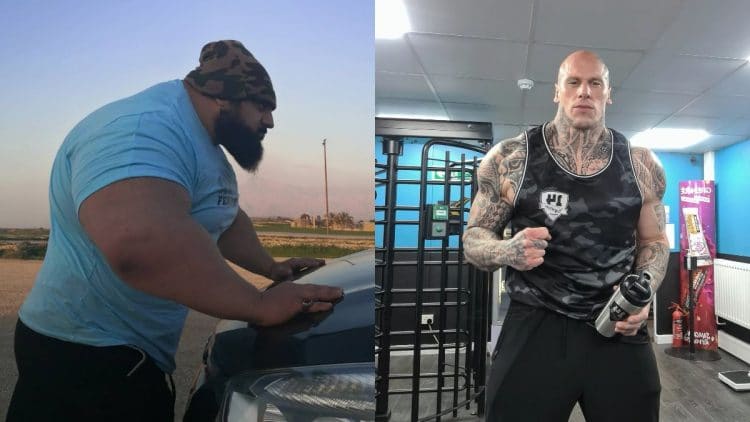 Despite interest from both teams, the anticipated boxing match featuring Martyn Ford and Iranian Hulk has been shelved, and more details surrounding the fight cancellation continue to surface. Ford revealed that he feared being arrested in Dubai after Iranian Hulk and a group of men surrounded his hotel room while he was having dinner with his wife.

‘The World’s Scariest Man’ was expected to make his boxing debut against Iranian Hulk (real name Sajad Gharibi) last month. Pre-fight hype erupted for the contest following a violent face-off confrontation in Dubai. As the two met in person, there was a drastic size disparity, and Ford towered over his opponent Sajad Gharibi. During the widely publicized encounter, Iranian Hulk attempted to take Martyn down, but to no avail. After they regrouped, Ford decided to push the Iranian Hulk to the ground in a show of strength.

Iranian Hulk admitted in an emotional interview that his family disowned him as a result of the embarrassing face-off. According to Martyn, the Iranian Hulk that showed up, ‘WAS NOT what was sold to us or our investors’. The fight was called off via Instagram by Ford, and he mentioned that health and safety precautions were at play. Gharibi has amassed a giant social media following with unconventional workouts and his enormous physique. However, upon seeing him in person, Ford suspected that Gharibi may have sold his team on something completely different than what was presented before the fight came together.

After Iranian Hulk became aware that Martyn called off the fight, he insinuated that it was actually Ford who pulled out of the contest, planning to sue his team for a contract breach. Despite the fight being tabled, it appears the dramatic saga between Ford and Gharibi is far from over.

Martyn Ford Recounts Hostile Week in Dubai: ‘He Just Wanted to Look Strong in Front of his People’

Ford remembers enjoying a holiday dinner with his wife before being made aware that six guys and Iranian Hulk were waiting for him outside his hotel room.

“I was on a private holiday for me and my wife, I flew her out for a couple of days and I wanted to have time away from it,” Ford told Mirror Fighting . “For me having respect for a sportsperson and understanding what an event is. I don’t want to fight on the streets in Dubai. He just wanted to look strong in front of all of his people.

“There was about six guys and him stood outside my hotel waiting for me to come out. That sums up the whole event for me. It was an absolute joke. Now if you are honestly wanting to do a professional fight, to stand outside like that when I am there with my wife. That is not boxing and that is not a role model. Martyn Ford shared.

After careful consideration, Ford realized the situation was unwinnable. Either way, it would likely result in his arrest.

“I understand he is upset and frustrated, to me that is something that is going to get someone hurt and potentially arrested. What is the point of me going out and meeting him and six guys in Dubai? What is going to happen? Worst case scenario I get done over by seven guys. Ford said. Best case I do all seven guys and get arrested.”

At 40 years old, Ford doesn’t want to be seen as a street fighter and is committed to improving as a boxer. While he’s yet to have his debut in the new sport, Ford’s agility and power have been on full display in a number of training videos.

“I am a 40-year-old guy, I am not an idiot. I am not going to have a fight on the streets, I don’t want to be seen as a street fighter who is beating up bums in Dubai and never be able to come back there again because I have a criminal record.”

Ford recently opened up about his nixed showdown with Iranian Hulk. He believes if the fight would have moved forward, Gharibi would have committed suicide in the aftermath. With genuine concerns about his opponent’s mental health, Ford is ready to move on and look for a new opponent. Iranian Hulk, on the other hand, isn’t taking the fight cancellation as gracefully. Gharibi was seen last week squashing a frying pan with his bare hands in a show of frustration.

There is currently no scheduled opponent in mind for Ford’s potential boxing debut. After sharing a horror story from his time in Dubai preparing for Iranian Hulk, Ford seems pleased to put this chapter behind him once and for all.