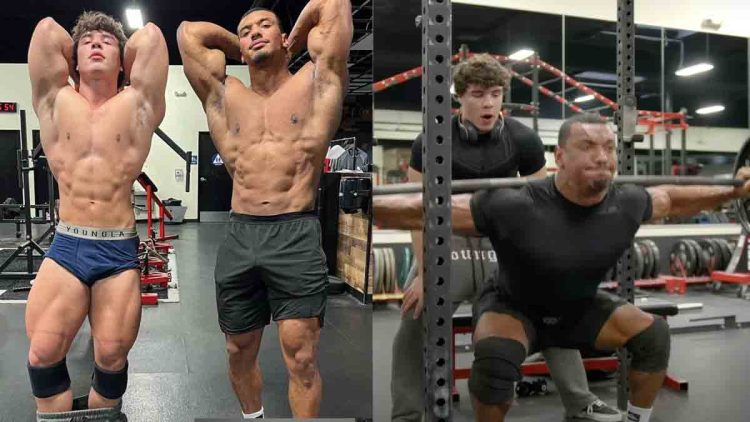 Recently, two famous fitness personalities, Larry Wheels and Lexx Little, have collaborated on a video that shows their workout session. In the video, they performed the squat, an exercise which builds lower body strength. Larry Wheels, known for his impressive strength, performed a 16-rep AMRAP (as many reps as possible) set with a 505-pound (229-kilogram) squat, a weight that is heavier than the one-rep max of many gym goers.

Upon warming up and doing squats with some lighter weights, Larry Wheels put on his lifting belt and knee wraps, fully committed to giving it his all on the 505-pound (229-kilogram) squat AMRAP. Once he started the set, Larry did not make the slightest pause until his 13th rep. He then went on to squeeze three more reps out.

“Legs is my greatest muscle to train since it poses the greatest challenge.”

Lexx Little, inspired by Larry’s feat of strength and the gym’s atmosphere, decided to attempt one of his all-time goals: a 600-pound (272.2-kilogram) squat. Lexx accomplished his lift successfully with Larry’s assistance. After completing the lift, he felt such a burst of excitement that he couldn’t hold back the emotion. Having a one-rep max record for his squat was a major achievement for Lexx.

“Oh man, I can’t believe it. It’s been two and a half or two years since I PRd… Man that felt so good… I couldn’t do that without you (Larry Wheels) being present behind me.

Regarding Larry Wheels’ one rep max, he didn’t test it in the video, having completed a mock meet just a few days ago. As many know, Larry has stopped using steroids and is now only on TRT (Testosterone Replacement Therapy), which caused his strength, physique, and looks to change drastically. So, the purpose of the mock meet was to test his strength on TRT. Larry ended up squatting 330 kilograms (727.5 pounds) in that mock meet, as well as benching 230 kilograms (507.1 pounds) and deadlifting 350 kilograms (771.6 pounds).

However, during his video with Lexx Little, Larry said some stuff that might excite many fans. The satisfaction that he got from powerlifting was above anything he had gained from bodybuilding, arm wrestling, or anything else he had done. This could mean that Larry is potentially coming back to powerlifting.

“With powerlifting, I can’t think of anything else in my life that is more of a dopamine rush and more satisfying than smashing a big PR.”

Related: Larry Wheels Says Starting TRT at 17 Turned His Life Around: ‘I Was Headed Down A Dark Path With Drugs’

Clearly, Larry Wheels is committed to improving his powerlifting lifts, but what is even more remarkable is seeing how much of an impact his presence has on others. Both Larry and Lexx Little had a brilliant workout, which will hopefully be just one of many.