Larry Wheels calculated percentages to compare his new TRT lifts to his previous steroid PRs at a similar bodyweight. 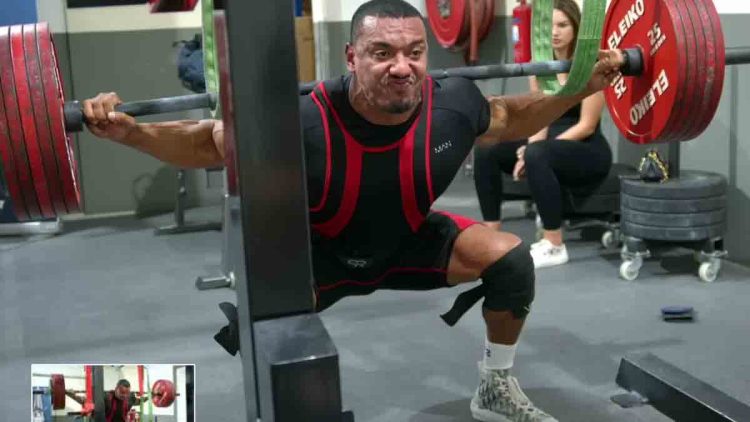 Larry Wheels’ mock meet was a much-anticipated event for powerlifting fans and for good reason. Larry is a well-known and highly respected figure in the powerlifting community, and his decision to go clean and stop using steroids and performance-enhancing drugs (PEDs) was a brave and admirable one. Athletes are expected to lose strength when they stop using PEDs, so Larry was no exception. In order to see how much his strength had declined, Larry decided to perform a mock meet and compare his current lifts on Testosterone Replacement Therapy (TRT) with his best steroid lifts.

Larry Wheels followed the rules of raw powerlifting for the bench and deadlift, while he opted to use knee wraps for his squat. He completed all three events in a time span of 90 minutes and the results were eye-opening.

Starting with the squat, Larry’s third and final attempt came out to 330 kilograms (727.5 pounds). While it is a 5.8% drop from his previous personal record (PR) at a similar bodyweight of 349.7 kilograms (771 pounds), Larry’s squat is very impressive.

The bench press also saw a decline in strength, with Larry successfully completing a final attempt of 230 kilograms (507.1 pounds). His PR at a similar bodyweight, while he was on steroids, was 260 kilograms (573.2 pounds), coming out to a drop of 12.2%, the highest of all three events.

The deadlift was the only lift with which Larry was not satisfied, but it still saw a relatively small decline in strength. His final attempt came out to 350 kilograms (771.6 pounds). This is 24.7 kilograms (54.5 pounds) less than he was able to do at his career best with a similar bodyweight, a drop of 6.8%. While the drop in results may be demotivating, it is important to remember that Larry has stopped using PEDs after a decade of use, so it is still a shock to the body.

*Larry Wheels had heavier All-Time PRs then those listed above, but he compared his lifts to those previously performed at a similar bodyweight. For reference, Larry currently weighs around 114 kilograms (251.3 pounds).

Related: Larry Wheels Says Starting TRT at 17 Turned His Life Around: ‘I Was Headed Down A Dark Path With Drugs’

Larry Wheels revealed that he is satisfied with the current dosage of TRT and that he will continue at this pace. His blood results came back and it looks like there aren’t any risks to his health. So, Wheels will try to build on this foundation that he has built, which means that we will probably see him beat the lifts from the recent mock meet in the future.

“This prep has been very enlightening, seeing what I’m capable of on TRT… I’m enjoying the process. I feel great. I think I look better than ever, skin, sleep, mood, everything is stable.”

Judging by his post-meet speech, Larry Wheels seems to have rekindled his love for powerlifting. So, that might be one of his goals for the future. As is fairly known, Larry has broken numerous All-Time World Records in the past, while also succeeding in other sports as well. He won a bodybuilding show a few years back and appeared in numerous arm wrestling competitions. Larry’s next goal was to conquer Strongman, but a back injury changed his goals.

Overall, Larry Wheels’ strength did not drop as much as expected, since he still put up mind-blowing numbers. This is great news because Larry is now motivated to continue improving, which is what everyone is eager to see.