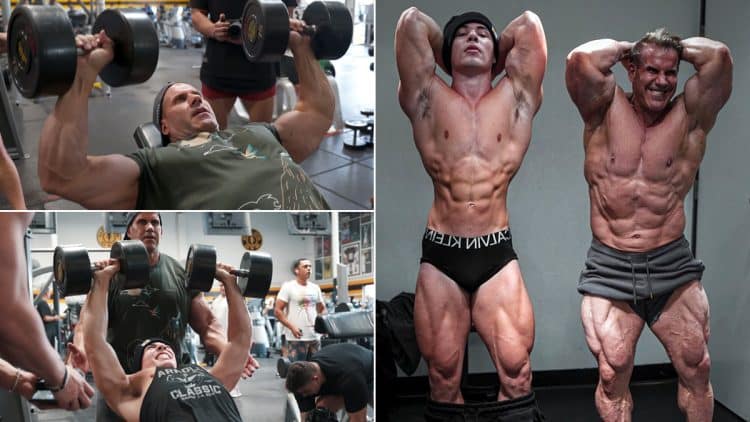 Bodybuilding legend Jay Cutler continues to share his bodybuilding knowledge and inspire the younger generation of fitness enthusiasts. Cutler is one of the greatest Open division bodybuilders in the sport’s history. He is best known for winning the prestigious Mr. Olympia title four times. After defeating the legendary Ronnie Coleman at the 2006 Mr. Olympia to wear the crown, Cutler went on to secure the top spot in 2007, 2009, and 2010. Competitive bodybuilding is an extremely demanding sport that has taken a heavy toll on the long-term health of many elite bodybuilders. However, Cutler is one of the few legends that walked away into the sunset without any major injuries or health issues. This can be attributed to Jay Cutler’s tendency of listening to his body and finding innovative ways to work around problems.

Cutler has significantly downsized after retirement and maintains an impeccable physique at 49 years of age. He routinely interacts with the younger generation of bodybuilders through his podcast and collaborative training sessions to exchange bodybuilding knowledge.

It is no secret that Jay Cutler, who has won four Mr. Olympia titles, is an expert in chest training. Those who are passionate about bodybuilding won’t need an excuse to train their chest regularly. No matter how obsessed you are with building pecs, you can still improve them by learning from the best.

Recently, he joined hands with American fitness model and influencer Lexx Little for a workout session. Lexx Little is one of the youngest fitness influencers on YouTube and he grabbed a lot of attention online due to the insane transformation he went through over the last few years. The 21-year-old is relatively young but definitely knows how to pack muscles with a rigorous training regime.

Lexx stated that he met Jay Cutler recently but they have developed an ‘uncle-nephew’ bond in a very short amount of time. The duo joined hands for a chest workout. The video of this session was uploaded on Lexx Little’s YouTube channel.

Jay Cutler and Lexx Little started the workout with a machine incline press. When Lexx inquired about the preferred rep range and volume, Cutler stated that 10 to 12 is a good rep range and he personally does not prefer doing high-volume workouts.

“Very rarely in my training do I go for high volume,” Jay Cutler said.

Cutler did a field set first and performed a few working sets of this movement as Lexx Little followed the suit.

Cutler next took his ‘nephew’ to take up free weights and do the incline dumbbell press. The duo performed a few working sets of this exercise after a field set with moderate weights. Cutler noticed the weights Lexx and his training partner were choosing and joked:

“Don’t save yourself for the next set. You’re not going to push me to failure anyway. We’re gonna just keep a constant flow. F*** the weight.”

Cutler and party went back to working with the machines next. They performed flat bench press on the Cybex Plate-loaded machine. A general belief says that incline pressing movements focus more on the upper pecs compared to the flat presses. However, Cutler busted this myth and showed the movement and pump in the upper chest as one of Lexx’s training partners did this movement.

Cutler next took to this isolation exercise that activates the sternal head of the Pectoralis Major muscles. Additionally, this movement activates the muscles in shoulders and back. Cable Crossover was the last chest exercise of the day as Cutler focused on working the shoulders with the next movement.

Cutler sprinkled this shoulder movement in the chest workout to work the lateral deltoids. the duo wrapped up the training session after a few sets of this movement.

The Masters Olympia will make a comeback in 2023 as revealed by Olympia president Jake Wood. Jay Cutler retired from bodybuilding following a 6th place finish at the 2013 Olympia. He has not expressed the desire to compete professionally again. However, looking at his physique in this video and some of his recent physique updates, there is no denying that the 49-year-old will make for a perfect candidate to compete at the Masters Olympia and potentially steal the show.

In addition to his four Olympia titles, Cutler has proven to be a master at building up the chest. With his quad stomp pose, Cutler put to rest any doubts regarding his position within the bodybuilding community. It is common for bodybuilders to display their proportions or physiques with iconic poses, but Cutler’s quad stomp was particularly noteworthy. A statement of intent is being made to ensure that he is remembered and noticed.