Wheels talked about using steroids/testosterone at 17, his diet, arm-wrestling tricks, and his five-year plan for the future. 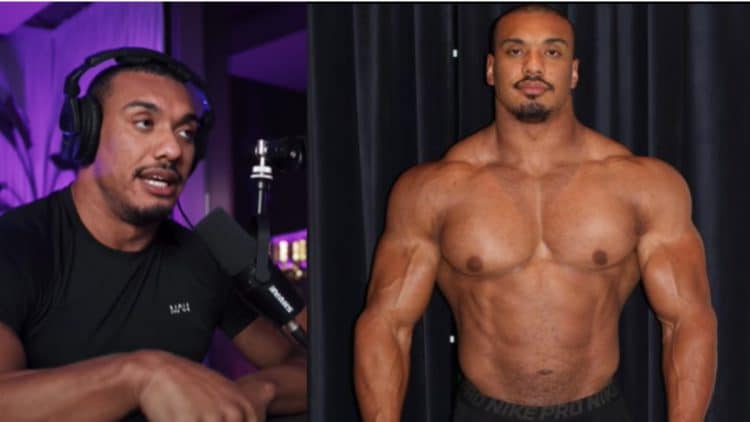 Larry Wheels is recognized as one of the strongest athletes on the planet. In a recent interview with Mike Thurston, Wheels credited testosterone for helping him stay away from illicit drugs and talked about some of the diets, PRs, and tricks he’s learned as a multi-talented athlete.

Despite being only 27 years old, Larry Wheels has a wealth of experience competing in various disciplines, like arm-wrestling, powerlifting, bodybuilding, and strongman. A few months ago, he was scheduled to compete at the 2022 Middle East’s Strongest Man competition but was forced to pull out due to a back injury.

In August, Wheels decided to stop all performance-enhancing drugs (PEDs) and announced that he would still take testosterone replacement therapy. Since making the change, Larry has kept fans updated on the physical and psychological changes he’s noticed. Following months of just using TRT, Wheels reported that his strength and moods were not dramatically impacted.

However, Wheels revealed that 10 years of steroid abuse likely affected his appearance, most notably his face. He posted a side-by-side comparison photo to demonstrate how strong the compounds were.

Given the changes he’s undergone over the last few months, Larry Wheels joined fitness model/influencer Mike Thurston for a candid discussion. They talked about Larry’s steroid/TRT use, diets, PRs, arm-wrestling tricks, and his five-year plan for the future.

Larry Wheels: TRT at 17 Saved Me From ‘Going Down A Dark Path’

Larry Wheels reflected on the dark path he was going down before trying TRT for the first time.

“So, see when I was 17, the friend that was my workout partner, and this person I spent all my time with — see — we would party everywhere. We would go out every other day. I’d experiment with drugs at the time. I tried all of the drugs. Had a lot of fun doing it but I realized that he was going down a very dark path, I could see it in him. He was changing before my eyes.

After trying TRT at 17, Wheels saw noticeable differences to his body. Most notably, he gained over 32 pounds in two months.

“That’s what I did, I started testosterone at 17,” says Larry Wheels. “Yeah [it was a noticeable difference] I went from 95 kilograms to 110 in two months. So, it was a night and day difference. A lot of that was water retention. I was a bloat fish, super bloated but I loved it. I felt so much bigger, so much stronger. It was just a big transformation.”

Wheels Reflects on Best PRs, and Eating Six Meals Per Day While Powerlifting

When discussing some of his best feats of strength, Larry highlighted the first time he deadlifted 900 pounds raw.

“The one that got me the most hype was when I was — don’t know how old I was actually, forgetting now but I was doing raw lifts so just a belt and chalk, no wraps, no suit. It was 410 kilograms, it was just one rep. That was the first time I ever did that much weight. It was a huge PR. It was a 15 or 20-kg PR from my best. It was just a huge milestone, 410-kg – 900 pounds.

It was so satisfying because I had no equipment, just my belt on. No straps or nothing. I remember, there’s such a huge rush of adrenaline,” says Larry Wheels. “That got me hyped more than any other lift in the world. I’ve had some hyped lifts for sure, but that was the most hype.”

During his time as a powerlifter, Larry Wheels had the total record, which takes into account his squat, bench press, and deadlift max PRs.

“But in all of them [squat, bench, deadlift], my records with all three put together – that creates a total, I have a record for the total, all three combined. That’s right, [it’s done in bodyweight categories],” says Wheels.

At the height of his powerlifting career, Wheels mentioned that he consumed six meals per day. In addition, he consumed protein shakes with a tub of ice cream added to each one.

“Ice cream, yes. I would literally put in a tub of ice cream in every single protein shake. So, it would be an ice cream protein shake three times a day in addition to six meals, which were absolutely junk garbage like pizza, burgers, fries, sweets, all kinds of shit. I had to get to 10,000 calories a day,” says Wheels. “I would love to have did it longer to see how big and strong I can get because in powerlifting, your squat and bench go up as your weight goes up right. More calories, bigger lift.”

Wheels on Arm-Wrestling Career: ‘I Got Manhandled,’ Little Did I Know It Was About Technique

While testing the arm-wrestling waters, Larry realized technique was more important than strength.

“He introduced me to a guy called Travis Bagent in the U.S., I got manhandled. Me feeling strong, being strong, thinking I’m strong, I thought it would make all the difference on the arm-wrestling table, but little did I know [it was about technique].

Wheels: My Five-Year Goal Is to Have ‘Passive Income’ to Sustain My Current Lifestyle

Wheels said his future lies in passive income, so he can support his current lifestyle without having to work a traditional job.

“I’m looking to acquire properties each year and create passive income by getting the rental money from the tenets. I don’t want to flip houses. That’s bigger money, but bigger risk. I want to take on a low-risk investment that will pay me passively. For example, a property will give me roughly $1,500 a month in rent without lifting a finger.”

He intends to buy properties and acquire wealth by charging rent from tenets.

“I want to pay for these properties in cash so I don’t have to worry about any of the interest rates or anything like that. It would just be all profit. If I acquire two or three properties a year, in 10 years’ time, I’ll be able to have enough passive income to sustain my current lifestyle. Because what I don’t want to do is as I keep creating more revenue or income and revenue, I don’t want to keep upgrading my lifestyle, otherwise I’ll never have money in reserve or [be able to] create wealth.”

This isn’t the first time that Wheels shared his thoughts on using steroids/TRT for 10 years. According to the social media star, the damage he caused to his body is still unknown a decade later. Nevertheless, Wheels accepts that PEDs and TRT are a part of all professional sports despite their taboo nature.

Wheels may have stopped steroids, but judging from his PRs, his strength hasn’t gone anywhere. After almost going down a dark road, Wheels credits TRT for helping him get his life back on track.

Frog Stretch Guide: How To, Benefits, Muscles Worked, and Variations