Mostafa takes a break from his bodybuilding diet for a day, indulges in 20,000-calorie cheat meals 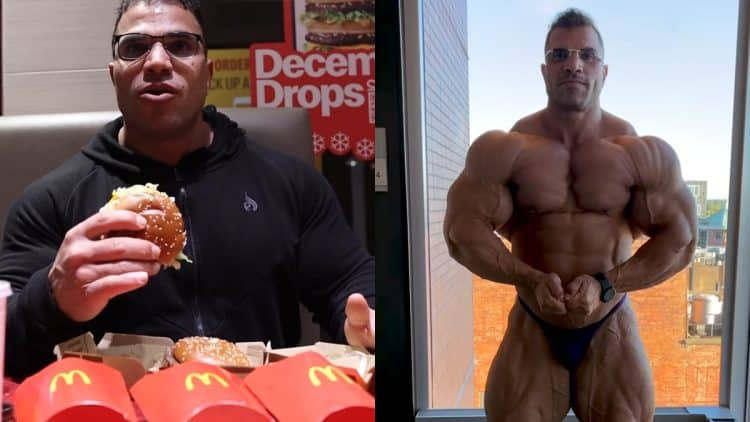 Competitive bodybuilding demands a spartan lifestyle and everyday sacrifices that most of us can’t even think about making. Following a strict diet that does not necessarily satisfy the taste buds is probably the most difficult part of it. So enjoying indulgent foods once in a while can really help get rid of the stress. Bodybuilder Hassan Mostafa also allowed himself the pleasure of food and recently indulged in a cheat day.

Mostafa is an Egyptian IFBB Pro bodybuilder that shot to fame due to unmatched conditioning and size at the 2019 Indy Pro where he finished third. Riding a streak of three consecutive podium finishes at the 2021 New York Pro, California Pro and the Puerto Rico Pro, Mostafa finished the 2021 competitive season with a thirteenth-place finish at the 2021 Olympia. An astounding win at the 2022 Orlando Pro win earned him a direct qualification to the 2022 Olympia. While the physique updates showed a lot of promise about Mostafa’s chances at the show, things took an unfortunate turn a few days before the event.

An untimely stomach infection and subsequent kidney problems forced Mostafa to back out of the 2022 Olympia. Although he missed the opportunity to show his talent on the grandest stage of bodybuilding, pulling out of the show was necessary for the Egyptian bodybuilder’s long-term health and career longevity.

Hassan Mostafa has recovered from the stomach illness and seems to have resumed his everyday routine. Recently, he shared his 20000-calorie cheat day on his YouTube channel. So without further delay let’s see which mouth-watering foods Mostafa indulged in over the course of the day.

Mostafa started his full day of eating with Reese’s Puffs breakfast cereals. The entire box contained approximately 2500 calories. The Egyptian bodybuilder enjoyed his first serving, wondering if he could finish the rest of the box. His Mr. Olympia prep diet restricted carbohydrate intake. Therefore Mostafa took this cheat day as an opportunity to satisfy his carbs cravings and slowly finished the entire box that equaled his daily caloric intake during the Olympia prep.

“It’s one of the things I would look at in prep but couldn’t touch. So today, I’m taking advantage and eating everything I wanted while in prep,” Mostafa said.

The 2022 Orlando Pro winner was not completely satisfied with his breakfast. He grabbed some caramel popcorn to munch on while watching a movie.

“Caramel popcorn is very high in calories. That’s why I don’t eat it but today that’ll come in handy considering I need to eat a lot of calories,” he said.

Mostafa next headed to a breakfast place with his daughter and wife to enjoy some good pancakes. It is one of the foods that he craves the most but cannot afford to eat during the prep. After waiting in the restaurant’s queue for a long time, the family of three got their table and Mostafa ordered two breakfast meals, one with eggs and potatoes and the second with pancakes. Both meals included approximately 3000 calories.

“I’m surprised how many calories are in the cheat meals. These two meals here are equivalent to a day or two of healthy meals,” Hassan Mostafa stated.

On his way back home from the restaurant, Mostafa munched on a pack of Oreo cookies in the car, catering to his sweet tooth.

Mostafa finished his workout for the day and made way to a restaurant to eat some burgers.

“I haven’t had burgers in a long time… Maybe six months now. So until the food is ready, I will snack on something first,” said a famished Mostafa.

The Egyptian Pro snacked on muffins until his burgers were ready. With each one of those amounting to 380 calories, Mostafa loaded over 1900 calories by making a quick work of five muffins. He then enjoyed two burgers with three large French fries before leaving the restaurant.

Mostafa’s final meal of the day consisted of caramel toast crunch cereals. After finishing the meal, he munched on two packs of cream wafers while watching the movie. At this point, Mostafa was sick of sugary snacks and ate a handful of nuts to soothe his taste buds. To achieve the 20000 calories intake, Mostafa ate a few potato chips which concluded his full day of eating.

After looking at Hassan Mostafa’s cheat day meals, most of us won’t help but think about that one friend whose normal day of eating looks like Mostafa’s cheat day! We don’t need to follow a strict diet that a professional bodybuilder like Mostafa has to. However, it does not hurt eating nutrient dense food as much as possible. So give it a shot and earn a cheat day to enjoy the junk foods.