Hollingshead returns to the gym after 2022 Mr. Olympia, annihilates a crushing leg workout 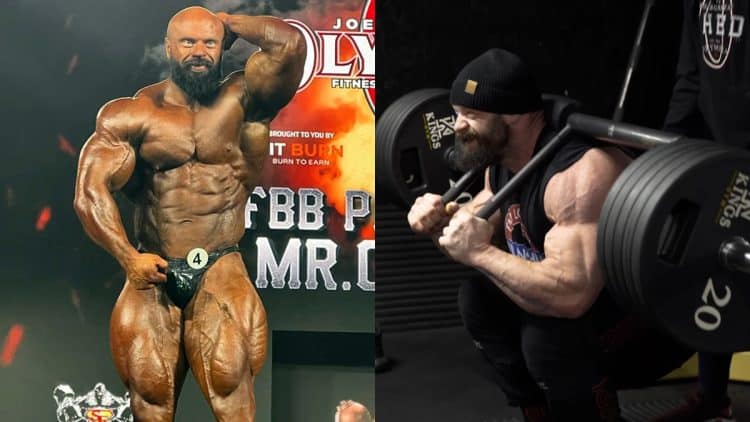 Bodybuilder James Hollingshead has returned to the gym following some time off after an extremely stressful year for his body. The British IFBB Pro bodybuilder has become a staple of the Men’s Open division and has garnered praise for his massive size. He shot to fame with the 2020 Europa Pro Championships win that earned him a direct qualification to the 2020 Olympia. However, he decided to sit out the 2020 Olympia to improve his physique. The win at the 2020 IFBB British Grand Prix had already punched him a ticket to the 2021 Olympia where ‘Shred’ finished 12th in the Men’s Open division.

Earlier this year, the Brit contemplated retirement from competitive bodybuilding but did not go through with it. Following a 16th-place finish at the 2022 Mr. Olympia that wrapped up on Dec. 17th, Hollingshead has returned to the gym. Recently, he went through a complete leg workout in the gym and shared three ‘must do’ lower body exercises. So without further delay, let’s check out the three exercises James Hollingshead recommends to incorporate into your training routine.

Hollingshead stated that he is still feeling a little tired and is not necessarily super motivated at this point. He reflected on the 2022 Mr. Olympia performance during the time off. Although there is room for improvement, Hollingshead is satisfied with his performance.

Hollingshead stated that the past year was a tough one on his body and intends to go a little easy on his body for a while.

“Obviously, we always want to do better and I will be better. But right now I’m going into a phase where I got out of a very busy year, a very hard year in terms of stress on the body. So I’ve got to be quite kind to myself. So we’re going to be back in training today,” he added.

While he has not decided on the training splits, Hollingshead went forward with doing three ‘must do’ exercises for the legs in this training session.

Hollingshead feels that the hamstrings are a neglected muscle group in most people’s leg routines.

“A lot of people come to the gym, they jump into the leg extensions, they do the leg press. They’re pretty fatigued by the time they’ve done the quads. Legs are tired. They do some hamstrings at the end but it’s kind of half-a**ed,” Hollingshead explained.

The 32-year-old added that leg curls are a really good exercise for warming up the knees without putting a lot of stress on them. Therefore he advised picking a hamstrings movement first for any leg training session. There is no compulsion to do any particular leg curls variation though. According to Hollingshead, you can do lying, seated, or standing leg curls as long as you start with hamstring exercises.

Hollingshead performed two sets of lying leg curls to start the training session. He did the first set as a loading set maintaining a 10 rep range. The second set was a back-off set where he reduced the weight and performed more than 10 reps.

This quad-focused movement is the second must-include lower body exercise according to James Hollingshead. The Prime plate-loaded leg extensions machine has three different loading pins. Loading the weight on the middle pin maintains a consistent resistance throughout the range of motion. The top pin increases resistance at the beginning that drops off at the shortened contraction. On the other hand, the bottom pin makes the movement lighter in the beginning and increases the resistance toward the end of the concentric phase.

“So really the two pins you want to take advantage of are (the middle and the top loading pins). In your earlier sets you want to be loading in the middle pin and as you progress, it would be wise to start loading the distribution between the two,” Hollingshead added.

He did the first set with plates loaded on the middle pin and distributed the load between the top and the middle pin for the second set. Hollingshead stated that he prefers to tilt back a little while doing the exercise to put the upper quad under greater amount of tension.

Hollingshead next performed the squats with Safety Squat Barbell. On a normal day, he would incorporate variations like heel-elevated squats to put more emphasis on a specific muscle. However, he performed only three exercises on this particular day. Therefore, the main goal was to equally load all the muscles in the lower body without giving importance to one over the other. He performed a few sets of the regular safety bar squats and did some calf work later.

After working the lower body with those three movements, Hollingshead worked the calves with Donkey calf raises on the machine and wrapped up the training session.

James Hollingshead has not had a breakout performance on the Mr. Olympia stage so far in his career. But he is looking at the results with a positive attitude. If ‘Shred’ continues to put in the work and improves his physique further, 2023 Olympia could be a whole different story.