The strongest man in the world and king of personal records join forces for an epic training session! 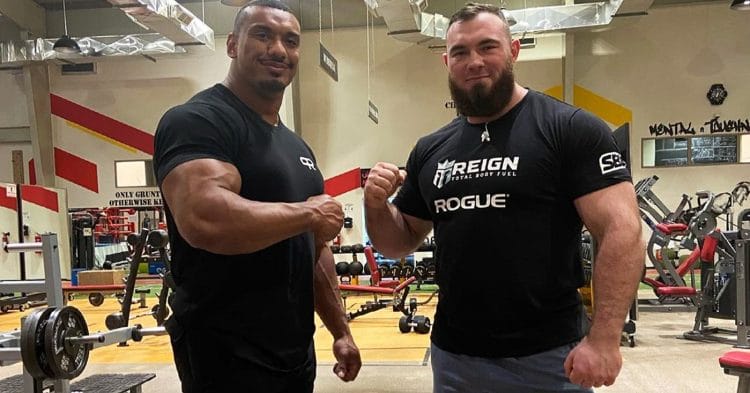 Larry Wheels is one of the most iconic strength athletes in our history. He’s a world-record-holding powerlifter who seems to excel at everything he does. Then you have Oleksii Novikov who, at just 24 years old, is the current World’s Strongest Man champion who also holds a few world records. Put them together in the same (weight) room, or “monster” room as Larry calls it, and what you get is a lot of testosterone…

Well, that was arranged recently when they met up at a gym in Bahrain the day prior to the World’s Ultimate Strongman (WUS). But little did Novikov know he’d go on to win the WUS Strength Island contest the very next day.

This was the first time the two formally met, although Novikov did mention that they briefly acknowledged each other at the Arnold Classic but weren’t properly acquainted.

Wheels explained that they’d be training the one-arm circus dumbbell press and he also wanted Novikov to coach him through proper execution of the Steinborn squat.

While Wheels mentioned that the circus press was his worst lift, Novikov is the record holder in the 100kg/220 lb dumbbell press for reps (11). The Ukrainian Strongman also says he wants to beat the record for max weight which would be 150+ kg/330 kg

So first and before they got into any weight lifting, Novikov led them through a warm-up that consisted of moving the head in different directions, stretching out the biceps, getting the elbows and wrists warmed up, and getting the entire body prepared for the big session ahead.

You could tell Larry wasn’t as much used to doing these types of warm-ups but it was good for him nonetheless.

Now it was time to get to the fun stuff; learning how to do a proper dumbbell press.

The first step was learning where and how to position the dumbbell after it’s cleaned from the floor.

Novikov places the dumbbell behind the neck on the traps and not in front of or even on the shoulder, especially when using such heavy dumbbells.

This technique keeps the shoulders and dumbbell more stabilized to be able to lift the most amount of weight possible.

The next step was to practice the half squat while the dumbbell is held on the traps. Wheels was instructed to focus more on using the hips to dip down and not so much the knees as he was doing at first.

It’s also important to remain mostly upright and not lean the body sideways too much. Although, it is necessary to tilt the head so that the dumbbell can comfortably sit on the traps. The elbows should always be kept high.

As for stance, the feet are about shoulder-width apart and knees are pushed outward during the descent into the half squat.

Novikov also suggested using a swing, sort of like a kettlebell swing, to get the dumbbell up onto his traps, especially when lifting heavy dumbbells.

Putting it all together

Next, Wheels had to lift a 62kg/137 lb dumbbell to his traps and just perform the squat without the press. He had a little trouble at first but got it the second time after using wrist wraps and some chalk. Although, it was still rather difficult.

“It was very unstable,” he said.

Novikov explained to Wheels that it’s better to use chalk on both hands as it can help to not use as much biceps and muscles that you shouldn’t use as much when handling the dumbbell.

The Strongman then demonstrated how to pick up the dumbbell and hold it on the traps and it was crazy how relaxed he appeared holding such a big weight.

He also pointed out that the weight of the dumbbell was resting on his forearm and that it’s very important to maintain this position. He pressed the weight overhead and made it look very easy.

Then it was Lary’s turn again and he used a big dumbbell but it was not easy to maintain the technique.

Novikov told Wheels he was making a mistake in allowing his elbow to move forward and in front and not keeping it pointed laterally or sideways to his body. But he still couldn’t get it and was experiencing some pain, and so Novikov suggested it could be an issue with his flexibility and having large muscles (a problem we’d all love to have).

But he just needed a little adjustment and to use the right technique for him. So they went with plan B and Novikov suggested holding the dumbbell more upright which turned out to be much better for Larry.

“Yeah like this feels comfortable, yeah yeah this feels much easier. I felt like it was 20kg/44 lbs.”

He explained that this way felt like a better balance because his chest is so big that it pulls his elbows a little forward and he didn’t feel as compressed. He just felt a lot more powerful in this position.

He tried it again and did it just as easily.

So they went through the movement again and Novikov was explaining that you have to be fast and efficient but technique is key. He also mentioned not using his shoulder muscles as the power does not come from using the arms to press.

Wheels was curious why he places the dumbbell down over the top after the press and the reason is that dropping it will cause it to tumble and you wouldn’t be able to perform the reps as quickly during competition.

They wrapped it up with the press and moved over to the Steinborn squat that involves an unconventional movement, and you watch that part and the entire session below.

There was a lot of great information and helpful tips in this session. Wheels was happy that he was able to find a dumbbell press technique that worked for him and he felt more confident for when he does have to do this lift in competition.

They did a little arm wrestling at the end and then called it a day. Plus, Oleksii Novikov had a big event the next day.

Sara Sigmundsdottir Ruptures ACL; Will Not Compete at 2021 CrossFit Games