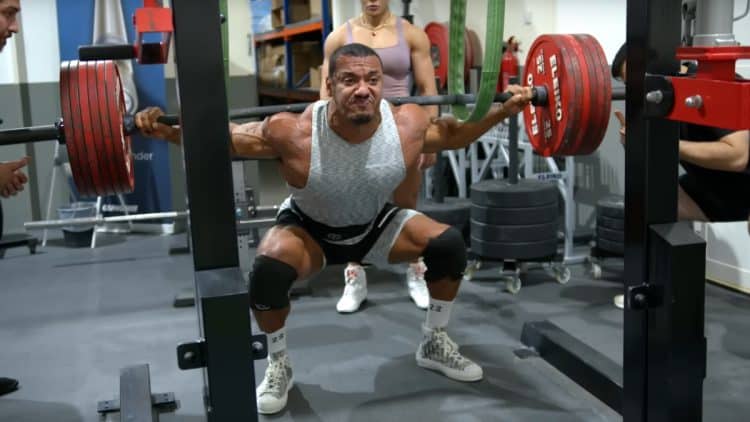 Larry Wheels is one of the few athletes who have gained recognition in multiple sports, including powerlifting, strongman, bodybuilding, and arm wrestling. Testing his strength on testosterone replacement therapy (TRT), Wheels crushed a massive 716.5-lb (325-kg) squat one rep max test in a training session.

Larry Wheels rose to popularity in 2017 when he set the World Record total of 2,275 pounds on the squat, bench, and deadlift without wraps in the 275-pound category. He won overall in his bodybuilding debut at the NPC Gold Coat Muscle Classic, an amateur show hosted in Feb. 2018.

With over 2.62 million subscribers on YouTube, Wheels is one of the most popular fitness influencers in the world. He has been vocal about his use of steroids and performance-enhancing drugs (PEDs) in the past. A few months ago, Wheels suffered a back injury in preparation for the 2022 Middle East’s Strongest Man and subsequently pulled out of the contest.

In August, Larry said the setback helped him realize the importance of his health and inspired him to quit steroids after using them for nearly a decade. Since making the decision, Larry Wheels has been treated with synthetic testosterone.

He continues to train while testing his limits using only TRT. Despite worries about how his strength would translate using only test, Wheels had no problem smashing a huge 465-lb (210.9-kg) raw bench press for five reps. Then, made it clear that he plans on testing his one rep max on TRT moving forward.

In another lift, Wheels tested out his projected one rep max on the squat using reverse bands to help ease some of the load. He managed to lift 771.6-lb (350-kg).

“What I’m doing now is reverse bands with my projected one rep max which is 775 at the competition.

“Why with reverse bands? You’re priming your CNS (central nervous system), you’re preparing it for the load you’re going to put without the reverse bands. Once your CNS is primed and ready with the reverse band squat, when you go to competition, you won’t have that shock.”

Wheels went viral after showing how his body changed since quitting steroids. He opened up about the damage caused to his body from the lengthy use and highlighted the aging effects with a photo comparison. The difference left people stunned at how much younger Wheels looks now on TRT compared to taking gear.

According to Wheels, the damage he caused from nearly 10 years of steroid abuse is still in question. Earlier this month, the 28-year-old opened up about his gear use in a candid interview. He explained that the practice is ‘necessary’ for anyone who intends to compete in professional sports, like football, soccer, and bodybuilding.

He has downsized significantly since the change but has maintained his signature strength. He recently gave fans a look into his 251-lb (114-kg) physique while using only TRT. Wheels smoked a massive 661-lb (300-kg) squat for five reps last week too. If the latest update is any indication, Wheels is on track to set a new PR next week.