Priest adds that even if they cut the prize money for the affected divisions, athletes would still compete: 'It's the Arnold Classic title, it's right up there with Olympia' 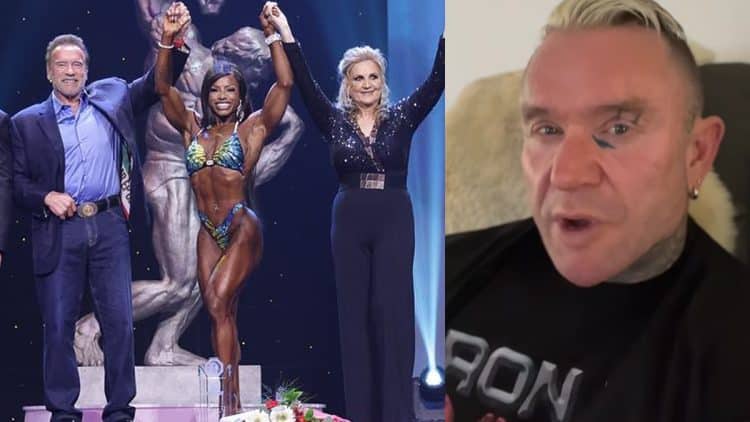 Bodybuilding veteran Lee Priest is taking issue with the Arnold Classic’s decision to exclude a number of bodybuilding divisions from their next show. In two videos shared via Instagram, Priest called out Brian Powers for removing the categories and said bodybuilders would still compete even if the prize money was cut in half.

A wave of backlash has followed Brian Powers, an Arnold Classic executive, who announced recently that a number of bodybuilding divisions will be excluded at the 2023 Arnold Classic. As of this writing, Women’s Physique, Women’s Bodybuilding, Figure, and 212 Bodybuilding will be omitted from their next event.

The controversial decision prompted two-time Women’s Physique Olympia champion, Sarah Villegas, to take action on social media. From 2015 to 2020, Women’s Physique was a staple of the contest. While a handful of divisions were excluded at last year’s event, many in the community chalked that up to the Coronavirus pandemic. However, we know now these divisions won’t return in 2023.

The annual Arnold Sports Festival is one of the most notable events on the bodybuilding calendar. Every year, the festival features an array of different sporting disciplines and contests. In addition to bodybuilding and strongman, the show also hosted a Slap Fighting Championship spectacle this year. The Arnold Classic is held in high regard, and many consider it to be the second most important bodybuilding event of the year, behind only Mr. Olympia.

Executive Brian Powers maintains that AC removed the divisions because there weren’t enough bodybuilders wanting to compete. Veteran Lee Priest disagrees and believes excluding divisions like Women’s Bodybuilding, Figure, and Women’s Physique is a step in the wrong direction.

Lee Priest Stands Up for Bodybuilders: “The Title Is Worth More Than the Money Combined”

In a pair of videos published to his Instagram page, Lee Priest dismantles Powers’ thought process behind removing divisions from the 2023 Arnold Classic.

“I still believe the 212 and the Figure should be in [the Arnold Classic]. He said it was due to the depth — whether there wasn’t enough people wanting to do it, or he thought the caliber wasn’t there. But I think I know of seven women Olympian women in the Figure who would like to do it.” Lee Priest said.

In a follow-up video, Priest explained the importance of winning the Arnold Classic, regardless of prize money. Given the prestige of the AC title, Lee says bodybuilders would compete at the show even if the prize money got cut in half.

“I forgot Women’s Bodybuilding and Men’s Physique — hey, just leave the Arnold Classic how it was. If it’s a money issue, I can guarantee the pure hearts of hearts bodybuilders female, male, physique women, and men, Figure — all of who you excluded… I guarantee if you half the prize money or had no prize money, they will still compete for the title. It’s the Arnold Classic title, it’s right up there with Olympia.”

Preist doesn’t believe prize money should determine whether or not a division gets to compete at the Arnold Sports Festival.

“Sometimes, people do things not just for the money, they do it for the love of the sport, and the heart, and the name, and that title. Maybe, if it’s a money problem, see how you go about the money. You’ll still have the competitors wanting it because sometimes the title itself is worth more than the money combined,” says Lee Priest.

After stepping away from bodybuilding competitively, Lee Priest took on an ambassador role for the sport in retirement. He’s an open book, who routinely shares his career cycles, memories, and training methods with fans and followers. In June, Priest was inducted into the Hall of Fame at Muscle Beach in Long Beach, California.

Following Brian Powers’ controversial decision, Lee hopes to effect change and bring back those divisions to the next Arnold Sports Festival. Preist believes athletes would still compete at the event even if they reduced the prize money.