Liver King jokes with the Nelk Boys on a recent pod about possible ab implants: "These are implants. They don't move." 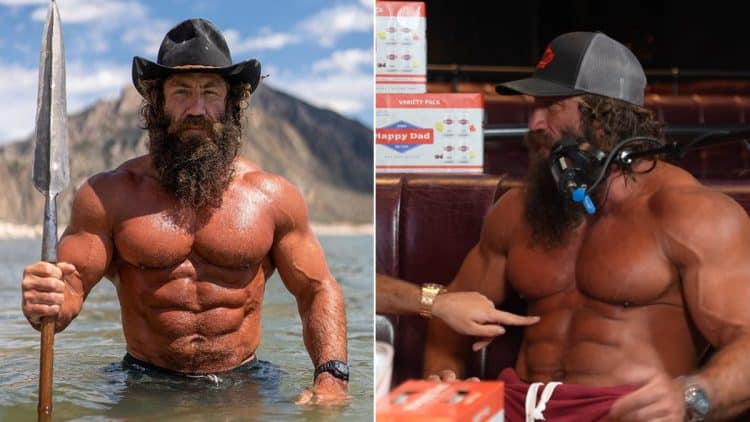 Brian Johnson, now known as Liver King, has turned into a social media celebrity, often grabbing headlines courtesy of his raw organ meat diet and dedicated ancestral lifestyle. In a recent video, Liver King discussed whether or not his abs are real and spoke about people achieving their ‘most dominant form’ with ancestral living.

Liver King lives his life in accordance with the nine ancestral tenets. Whether it’s sleeping, eating, or absorbing sunlight for ten minutes a day, each tenet plays a significant role in living a healthier life like our ancestors did centuries ago. The most important aspect to Liver King’s unique lifestyle is consuming raw organ meat, which is how he got the nickname ‘Liver King’.

His ripped physique has been the subject of criticism lately, as many question whether or not he uses steroids and/or performance-enhancing drugs. Joe Rogan, who is responsible for running the most successful podcasting empire in the world, voiced his opinion on the matter. He said Liver King’s plight seemed like a gimmick and added that he doesn’t believe he has a ‘a natural body’.

Liver King responded to the widespread scrutiny, and doubled down during recent interviews, saying that he’s natural and ‘never touched the stuff.‘ The natty or not debate rages on, so much so that the organ-eating star explained that people are now accusing him of having fake ab implants.

In a recent YouTube video, Liver King joined the Full Send Podcast to discuss a number of issues including whether or not his abs are ‘real’.

The 45-year-old trolled at first, suggesting that his abs were made up of implants worth upwards of $100,000. Afterward, he said that his abs are indeed real, and that they took years to develop from non-stop training.

“It’s 35 years of hard fuc**ng work every day. Never taking Christmas Off. Liver King explained. Today is Sunday, Sunday is rest day. I work out 14 times a week. Normally, it’s two a day. So here’s the thing, I get up just after the sun is getting up. Around 6:30ish, I get off my wooden plank bed. I sleep on fuc**ng wooden planks, right on the fuc**ng ground. I’ll tell you why. Why do people sleep in this thing? Number one, comfort is not good for the organism.”

After ensuring the Nelk boys that his abs were real, Liver King spoke about sleeping on a wooden plank bed, emphasizing that ‘comfort is not good for the organism’.

“Here’s the thing, since the inception of our being, we endured the most horrific fuc**ng things. Now today, people sleep in beds. They now have AC or the heater. Nobody has to do anything fuc**ng hard. I know you know this.

The things that make you really grow in life are the things that are fuc**ng hard. Otherwise, everybody would be rocking a self-made king. You guys became self made kings by doing hard shit. Comfort is not good for the organism. I get out of bed at 6:30 out of my wooden plank bed, I take a piss, and then I get to fuc**ing work.”

Liver King Shares How He Gets Started for the Day 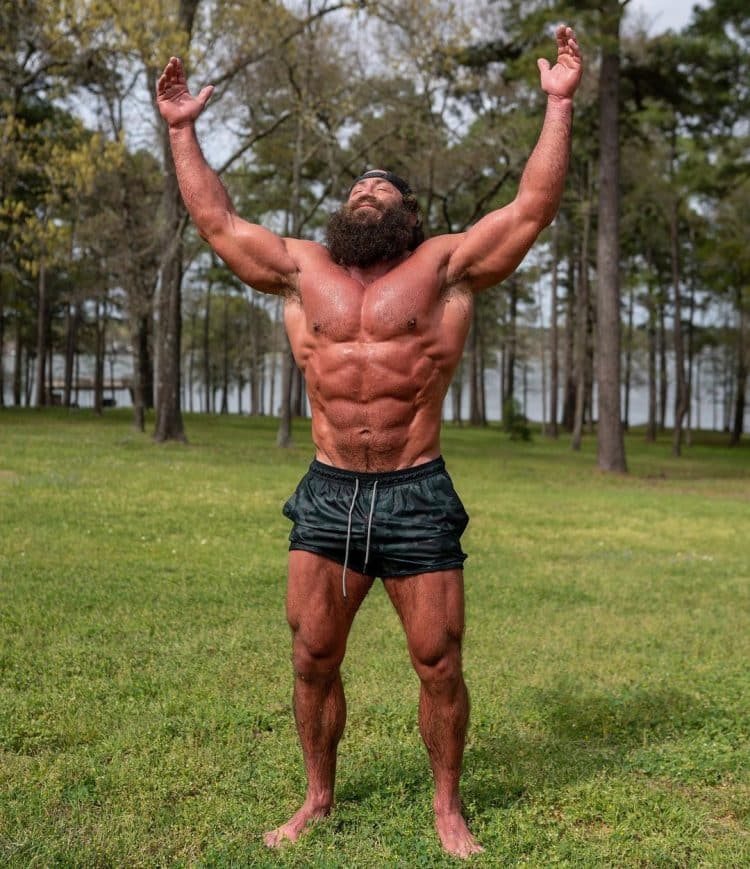 After shooting down the fake ab allegations, Liver King explained why he favors sleeping on hard wooden slabs instead of a soft mattress.

“Brian Johnson, 15 years ago slept in one of those beds. It’s a fuc**ng cast. Those spring mattresses, those shits are a fuc**ng cast. You get on the ground, and you do that for a while. Liver King said. “I can get into some of the details, one thing that I’ll say, is that I can’t sleep in a bed that has springs.”

Liver King prefers to ‘do the hardest’ exercises possible when he works out. He consumes a feast of raw meat and fertilized eggs when he’s done training.

“I get to the gym. I do the hardest fuc**ng thing I’m going to do. Immediately after the gym, I eat raw liver. I eat raw bone marrow. I eat fertilized raw eggs. I have a Liver King bar, and a whole beast protein shake. This is what I have immediately afterwards. Then, I get to work meeting with the CEOs of my company. I own a handful of companies, I do CEO meetings then. I’m so grateful.”

While he attracts a lot of attention for his obscure diet and lifestyle, Liver King is an astute businessman. Powerlifter Mark Bell recently visited his headquarters and found no evidence of steroid use whatsoever. However, one of Bell’s biggest takeaways from the visit was finding out that Liver King is approaching a “nine-figure” income.

Given the world’s obsession with Liver King’s physique, it seems his answer about fake abs has only sparked more controversy around whether or not he has a natural body. After spreading his message on the Full Send Podcast, Liver King is happy to see the ancestor lifestyle receiving recognition from popular media outlets.

Dan Solomon: Derek Lunsford is ‘No Where Near 212 At This Point’, Hints at Special Invite to 2022 Mr. Olympia in Men’s Open

Host of the most popular podcast on earth, Joe Rogan has reached a level of notoriety that few can rival....