Liver King joined podcast host Brendan Schaub to discuss his natty or not status and how to fix a "whole population" suffering from low testosterone. 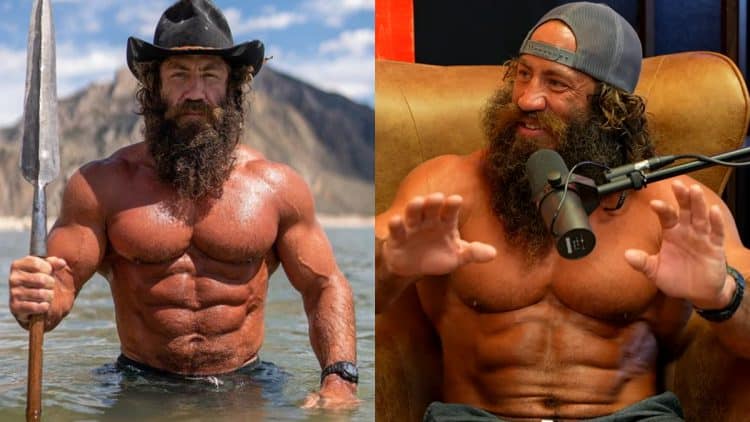 Brian Johnson, popularly known as Liver King, adopted an ancestral lifestyle years ago with the intention of living his highest and most dominant form. In a recent video, Liver King joined podcast host Brendan Schaub to give his remarks following a number of steroid accusations and discussed America’s problem with low testosterone.

“All of the accusations… I’m okay with making this a little side dish but let’s not forget the reason why I fight today, the reason why I unite is because people are actually really hurting,” Liver King said.

Liver King emerged as a fitness influencer courtesy of his outlandish workout videos and of course, his love for eating raw organ meat. He follows nine ancestral tenets, which structure his and his family’s day-to-day life. Liver King believes men have generally become soft in today’s society and one of the chief reasons is because they no longer hunt for their meals.

As the 45-year-old’s popularity exploded, he became a controversial talking point due to his shredded physique and unconventional diet. This prompted many, including Joe Rogan, to question his ‘natty or not’ status.

While he’s denied all steroid accusations, the two have bickered back and forth online for months. Liver King has called for Joe Rogan to welcome him on his podcast, but the famous UFC color analyst doesn’t appear interested in burying the hatchet.

And even though Rogan won’t entertain Liver King’s ancestral message, that doesn’t mean his close friend Brendan Schaub won’t. Months before inviting him on his podcast, former UFC heavyweight Schaub gave his two cents on Liver King’s way of life, and most notably, whether he uses steroids or not. Unlike Rogan, Schaub believes people are triggered by Liver King’s lifestyle because they can’t live like him.

During the podcast, Liver King shared that he’s had to deal with a slew of PED accusations over the past few months.

“People talked about this for about six to nine months. Then it became about ab implants. Then it was like, ‘oh Liver King wore a hat and then stopped wearing a hat, he got hair implants.’ This is like a real thing,” he said.

Brendan and Bryan show a picture of Johnson when he was 15 years old and he already had a six-pack of abs and a huge chest.

Liver King shared that people are struggling with health issues that can be remedied with an ancestral lifestyle. He says he’s “okay” with the accusations just as long as his message of ancestral living is being heard.

“All of the accusations… I’m okay with making this a little side dish but let’s not forget the reason why I fight today, the reason why I unite is because people are actually really hurting. 85 percent of people have self-esteem issues. Eighty percent struggle paycheck to paycheck.”

According to Liver King, if someone looks great, feels great, and functions great, then there is no reason to see a doctor.

“I look in the mirror. This is what I say: if you’re kicking ass in life and you have great energy, if you like how you look, feel, and function, if you got a kickin ass libido, why the fu** would I go to the doctor?”

“Seventy percent of people are overweight, half are obese, 50 percent are on medication, 40 percent have or will get cancer, and 20 percent of the population is infertile. This is why I’m here today. This is what I fight for.”

In addition to rising infertility rates and obesity, Liver King also contends that we have a “whole population with low testosterone.”

He added that he’s not against acute medicines, and if someone has a legitimate reason to see a doctor, they should.

“The main thing is, listen, if you have a legitimate reason to go [to the doctor], go. I’m not against acute medicine, I think it’s incredible,” Liver King told Schaub. “For the record, if you’re kicking ass in life, if you’re winning, who the fu** am I to tell you what to do.”

Liver King isn’t the only person calling attention to low testosterone. Hormone therapy guru, Dr. Rand recently discussed whether or not testosterone levels decline as men get older. While he believes there are exceptions to the rule, like Mike O’Hearn, he says for most men, it’s a fact of life that testosterone dips after the age of 35.

The candid discussion left podcast hosts Bryan Callen and Brendan Schaub even more interested in the movement. While his message may appear unorthodox to some, Liver King believes the ancestral lifestyle will help those who are struggling with health issues like obesity or infertility.