Martyn shared his take on why he believes the recent gym accident happened. 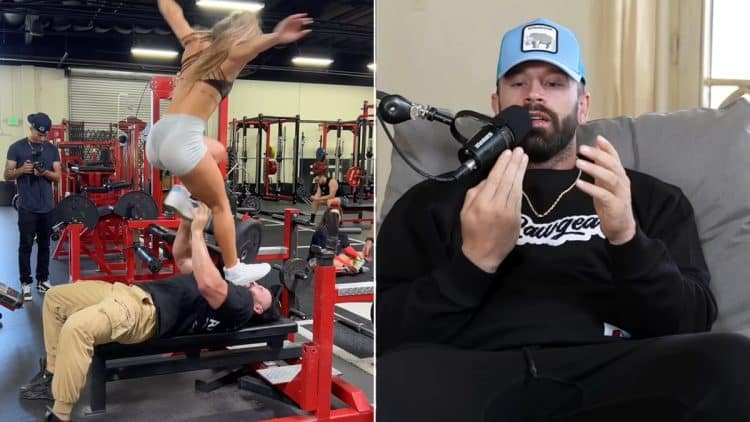 Social media sensation Bradley Martyn is one of the most popular fitness influencers. In a recent appearance on the Full Send Podcast with the Nelk Boys, Martyn broke down the horrific accident he suffered in the gym while making a video.

Martyn is also a bodybuilder who quickly amassed a huge following because of his insane shows of strength. He boasts over four million followers on Instagram and three million on YouTube and regularly collaborates with other celebrities.

Last month, he joined forces with Joseph Baena, son of legendary bodybuilder and seven-time Mr. Olympia Arnold Schwarzenegger. Martyn appeared to get along well with Baena, who opened up about his journey in bodybuilding and being addicted to working out in the gym.

Bodybuilding icon Ronnie Coleman, who holds the record for the most Sandow trophies with eight (tied with Lee Haney‘s eight), came across Martyn’s craziest lifts and was left stunned by what he saw. He praised Martyn for being able to lift such heavy weight. In one of the clips, Martyn was seen deadlifting 675 pounds for at least one proper rep while dressed as Kratos from the PlayStation gaming franchise, God of War.

Bradley Martyn gives his theory on why the gym accident happened

In a recent appearance on the Full Send Podcast, Martyn broke down how the horrific gym accident happened.

“For the first time in my entire history, I hurt myself doing a video. I’ve never actually hurt myself which might surprise you guys because I do stupid stuff all the time. But I tried to lift a girl, and I’ve done this before where a girl sat down on a plate and I pressed her, kind of like sitting Indian style and I pressed her.

Someone was like, ‘yo why don’t you have her stand up?’ I was like, ‘yeah, that’s cool, that’s easy’ and it wasn’t. The problem that I did, the thing that I f**ked up on was I used a bumper plate, you know how bumper plates are kinda wonky and bendy.”

Bradley further elaborated and said if he had a steel weight plate there wouldn’t have been an accident.

“I had her standing on the bumper plate and because she’s trying to hold her balance, she’s moving a lot, it’s not a steel plate. My biggest mistake was I wasn’t using a steel plate. I should’ve had a steel plate and wouldn’t have had a problem.

But it’s bendy so I go to press her up. I did it successfully the first time so they’re like let’s try it the other way… I’m on the bench press and I have a bumper plate, she’s standing on it and I’m pressing her vertically. When I hit the top, she does squats.”

“So I’m pressing, her feet are towards me and basically she’s losing balance and her foot kicks the plate out of my hands. The plate lands directly on my face like nose and mouth right in the middle of my face, and then she kicks me in my face which wasn’t a big deal.”

He shared his instant reaction after getting hit in the face, which required a total of ten stitches.

“I just got whacked and I sit up, and just went straight to the sink and bleeding out. It was instantly swollen and bleeding terribly. The worst part is I go right down the street to this brand new ER… I have 10 stitches. You normally don’t get stitches inside of your mouth, that’s what the doctor was saying.

Bradley Martyn shared his workout routine for developing killer arms and back in a single training session. He showed off his insane strength, lifting heavy weights on each exercise.

Given how quickly he recovered from the horrific injury, he will likely be back to training soon surprising his fanbase.