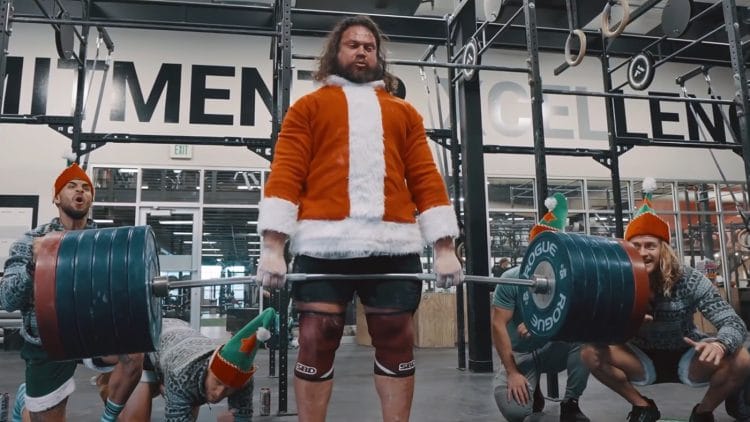 The 2021 Fittest Man on Earth, Justin Medeiros, and 2019 World’s Strongest Man, Martins Licis, have come together to do a workout and try some exercises from each other’s sport. They have done the workout at the XCEL Fitness in Holladay, Utah.

Even though Martins Licis is preparing for Arnold Strongman Classic, and Justin Medeiros is in his offseason, they managed to find some middle ground and do a workout while having a bit of fun.

Medeiros and Licis have something in common, and that would be that they are both winners of the 2021 Rogue Invitational in their respective sports.

At the start of the video, Licis is not accompanied by Medeiros, and is instead doing some strongman training. He only covered some axle clean and presses in this video, as he did a strongman workout, but did not record all of it. Licis also expressed how he feels about the axle.

“I hate axle, I absolutely hate this.”

When Medeiros joined Licis for a workout, he went to do some rowing to warm up, while the crew was making a crossbeam for the first exercise of the workout, which is a sandbag toss. Justin Medeiros explains that he always needs to warm up and get some muscle activation, as he has had hip problems and found that a good warm up solves it.

Medeiros added that he mostly does the same warm up when doing something that requires him to use his lower body.

“I do pigeon stretches, some runner’s lunge, some windshield wipers… I also got like a glute band for glute activation, monster walks, banded squats, tempo squats. And after that, I’m probably good to go” said Medeiros.

Medeiros tried to do a 20 lbs sandbag toss three times, but couldn’t do it. His first attempt was the closest, and it hit the bar,  Medeiros explained that it was lighter than he thought. Licis gave him some insight throughout the three attempts.

Licis then proceeded to clear the bar with ease, as it is a strongman event.

The sandbag toss was followed by some heavy deadlifts where the goal is to pause below the knees, also control the weight on the way down and not make a sound. While warming up on deadlifts, Medeiros gave advice to new lifters that they should lift smart, plan their sets, address anything that doesn’t feel right while lifting and not lose focus.

Licis finished the video with a sneak peek of an Echo bike challenge, but has not revealed the results.

It was fun to see the two worlds collide, and there is no doubt that Licis and Medeiros shared tips and advice on strength and endurance, which will help them both in their sports. Licis is set to compete at the Arnold Strongman Classic 2022 from March 3rd-6th, while Medeiros has not confirmed any competitions, but could compete at the 2022 CrossFit open scheduled to begin February 24th, 2022.

The 12 Best Trisets for Bodybuilding