Former Strongman Eddie Hall is ready to put his long-standing rivalry with Thor to bed and plans to come in heavy to deliver fight-ending power. 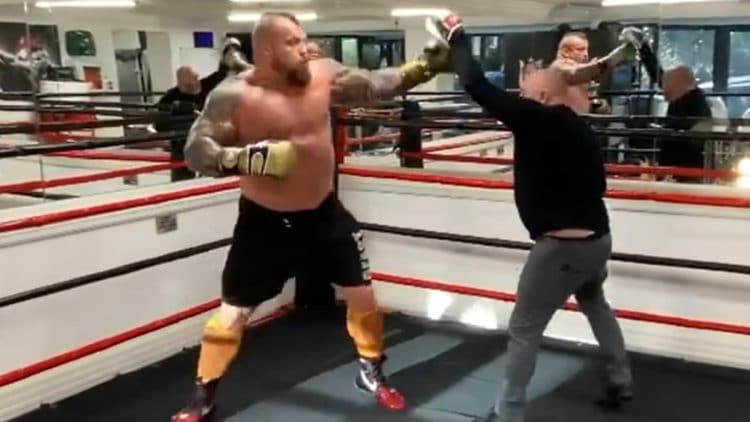 Set to take place on March 19 in Dubai, Strongmen collide as Eddie Hall will meet Hafthor Björnsson in a fight being hailed as ‘the heaviest boxing match in history’. With just 4-weeks to go, Eddie Hall believes his size and power will overwhelm ‘The Moutain’ when all is said and done.

The pair of Strongmen athletes have a history. Eddie and Thor have battled on the World’s Strongest Man stage pushing each other to the brink of their physical capabilities. This rivalry is about more than just throwing hands and winning a fight. As it stands, Björnsson and Hall are the only two men to deadlift over 500kg. In Nov. 2020, Björnsson broke the world record on the elephant bar deadlift by pulling 501kg (1,104lbs) which was two more pounds than the previous record set by Eddie.

In addition to going head-to-head on deadlifts, the two have also pushed each other in World’s Strongest Man competitions. First, Eddie Hall managed to capture the prestigious WSM title in 2017. In 2018, Thor secured his first WSM trophy. With such a heated rivalry, the two intend to put this feud in the rearview after their March 19 showdown.

The 2017 WSM continues to promote the fight with Hafthor. Eddie Hall shared a boxing video on his Instagram page looking leaner and agile compared to his old Strongman days.

“156kg / 343lbs and Counting!!!
Purposely kept heavy throughout my camp for Power and I fully intend on delivering it ⛰ 💥🥊
And don’t worry I can work for 10 rounds!
I’m calling this journey….
‘The Desolation of Thor’ 👊
Almost time for that big crybaby to pay!” Eddie Hall shared.

Hall has taken it upon himself to promote the fight with some intense training footage. The 2017 WSM plans to enter the boxing fight with plenty of weight and power to go along with it. In preparation for the marquee boxing match, Hall has lost a considerable amount of weight. In his Strongman prime, Hall broke cement with his physique that weighed upwards of 410lbs. Despite appearing slimmed down, the former Strongman has made it a priority to keep his power.

Sharing a “Full boxing strength session”, Hall has focused on strength and conditioning so that his power translates effectively for the ten-round boxing match. After a torn bicep kept the 2017 WSM from boxing Thor previously, The Mountain decided to test the waters and take a fight anyway. The Game of Thrones star entered the boxing ring for the first time in 2021 and earned a TKO victory against Devon Laratt.

RELATED: Strongman Eddie Hall Invites An ‘Average Joe’ To Try His Boxing Workout And Diet For a Day

With a venue, and date cemented, it’s only a matter of time before fans witness two of the most popular and dominant Strongmen try their hands in ‘the sweet science’. Judging by the agility and power Hall demonstrated in his recent training video, the March fight against Thor looks like it will be a violent one.