Mat Fraser’s HWPO Team has expanded substantially both in athlete roster and coaching staff ahead of the new season. 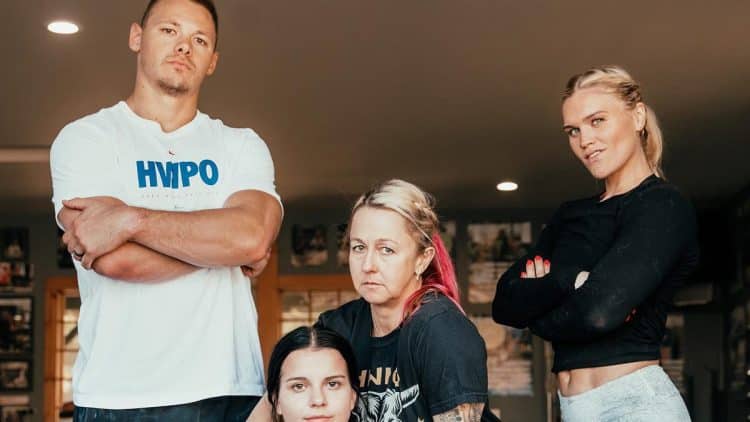 Mat Fraser has often discussed the dedication and attention to details it took to become the 5x Fittest Man On Earth®. A CrossFit athlete also has to master multiple skills beyond the usual sports life, which includes a rigorous diet and a strict sleep schedule. Some of these include athletics, swimming, bodyweight training, and Olympic weightlifting. CrossFit athletes regularly face tasks of completing snatches or clean & jerks, both in training and competition.

Due to Mat Fraser’s extensive experience, he understands how improving either skill can boost placings in the biggest competitions. So, now that he has his own coaching team called HWPO (short for his life motto, Hard Work Pays Off), Mat decided to turn to Olympic weightlifting experts, Catalyst Athletics. For reference, Catalyst Athletics consists of multiple coaches, who are also working with USA’s greatest Olympic weightlifting athletes.

Mal O’Brien, Jayson Hopper, and Katrin Davíðsdóttir have already started working with Aimee Everett. Their partnership has been revealed both on HWPO’s and Aimee’s personal Instagram accounts. Aimee was presented as “HWPO Lift” coach in the caption of the post, while she is also one of Catalyst Athletics’ main members. In addition, Everett is a USAW (United States of America Weightlifting) Senior International coach.

Catalyst Athletics At A Glance

Greg Everett founded Catalyst Athletics in 2006 and is currently one of the world’s leading sources of educational material for Olympic weightlifting. The Catalyst Athletics team consists of numerous certified US National and International coaches. However, the face of the company is Greg Everett and his wife Aimee, who just started working with HWPO. Both have extensive knowledge in weightlifting, which they claimed through years of experience.

What Is Up Next For HWPO Team?

Mat Fraser’s HWPO Team has recently expanded to six athletes from the original three. It now consists of Mal O’Brien, Jayson Hopper, Thur Helgadottir, Katrin Davidsdottir, Amanda Barnhart, and Sam Kwant. Fraser will give his all to take all of these athletes to the highest level possible, and he will now have some assistance from Catalyst Athletics in doing so. There is no doubt that everyone is eagerly looking forward to seeing how these Individuals perform in the 2023 season, but now is the time for them to train hard and succeed.

It is not clear how many athletes from the HWPO Team will be taking part at the 2022 Rogue Invitational, which will take place on Oct. 28-30, 2022, in Austin, Texas. Regardless, half of the team has still not spent enough time with Mat Fraser in order to hope for a massive turnaround. However, the situation will change drastically in the upcoming few months.