Krizo is 'a million percent sure' he will bring a better physique at the 2022 Olympia. 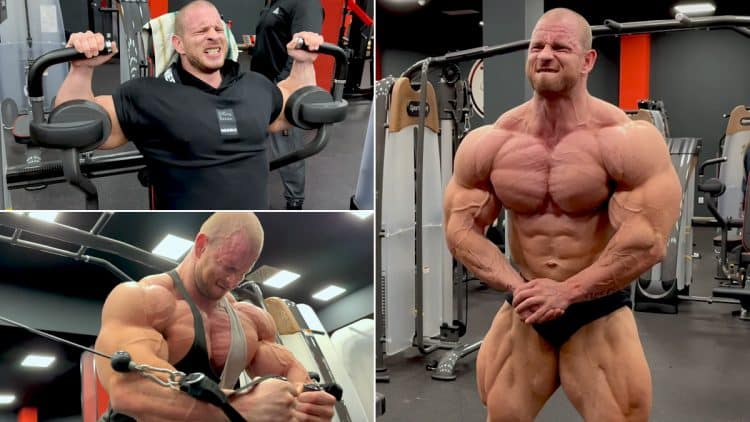 Michal Krizo is gearing up to face the biggest challenge of his competitive bodybuilding career. Krizo, a Slovakian professional bodybuilder, transitioned to the NPC League earlier this year to kick-start his campaign for the 2022 Olympia. Krizo earned his IFBB Pro card after dominating the 2022 Amateur Olympia Italy. Soon after, the Slovak destroyed his competition at the 2022 EVLS Prague Pro to earn a direct qualification to the 2022 Olympia, where he will go up against some of the most elite bodybuilders of this era. Krizo has generated a lot of hype around his name since transitioning to the NPC and became a target of old rival Blessing Awodibu who welcomed Krizo to ‘the a** whooping league’ upon earning his pro card.

The 2022 Prague Pro winner will attempt to silence his rivals at the 2022 Olympia and prove that he deserves a place among the division’s top contenders. Bodybuilding legend Jay Cutler is a huge believer in Krizo’s potential and recently opined that the Slovak could ‘pose a real threat’ at the 2022 Olympia. To achieve this goal, Krizo is working relentlessly in the gym. Recently, he went through a chest workout as a part of his competition prep. The video of this session was uploaded on Krizo’s YouTube channel.

Many bodybuilders reduce the weights they use in their workouts and switch to using machines as they get closer to a contest. The weights on a plate-loaded and selectorized machine move along a fixed trajectory, eliminating the need to control them. This significantly reduces the chances of injury. Krizo is also following the same path and used machines for all the exercises in this workout.

While speaking about the progress in his 2022 Olympia prep, Krizo said:

“I’m sure I’ll look better at the Olympia compared to Prague Pro. A million percent!”

The Slovakian bodybuilder started off with the incline machine chest press on a plate-loaded machine to work the chest. He did the warm-up set of this exercise with one plate on each side. Krizo then worked his way up to one and three quarter plates for the top working set. Following this, he did a back-off set with one plate on each side and took to the next exercise.

Krizo next took to the seated chest press on a SportArt selectorized machine to fire up his chest. After performing three sets of this exercise, the 2022 Prague Pro winner jumped to the Smith Machine exercise.

It is not possible to target a specific part of a single muscle group. However, certain variations of an exercise can absolutely emphasize one part of a muscle more than the other. Incline pressing movements are a good example of this as they put more emphasis on the upper pecs.

After the pressing movements, Krizo next took to the flyes. While pressing movements develop the pushing ability of the upper body, flyes are good at improving chest and shoulder adduction. Hence, both movements are essential for building a strong and functional chest.

Krizo did a few sets of pec deck flys on the SportsArt machine before moving onto the next exercise.

This isolation movement is an excellent chest workout finisher as it induces the final bit of stimulus into the pecs after they are pumped with the earlier heavy compound movement. However, cable crossover is not merely a pump-inducing finisher. According to an ACE-sponsored study, this exercise ranks third in pectoral muscle activation after bench press and pec deck fly. Therefore it deserves a spot in your training routine for complete chest development.

Krizo wrapped up the training session after a few good sets of this exercise.

Following the workout, Krizo practiced posing in the gym and displayed his impeccable physique six weeks out of the 2022 Olympia. Krizo possesses one of the biggest arms in the Men’s Open division, and they were at full display during this session. While Krizo’s perfect v-taper is already well known, one could not help but notice the separation in Krizo’s deltoids during the back double biceps pose.

Krizo was criticized for subpar conditioning during his 2022 Prague Pro appearance earlier this month. However, it can be argued that he did only the bare minimum to win the show, and the final product at the 2022 Olympia might be a lot better. The Slovak has a lot of hype around him heading into the most prestigious bodybuilding competition. It remains to be seen how far he goes in his maiden Olympia appearance.

You can watch the full workout video below, courtesy of Michal Krizo’s YouTube channel: