The four-time Mr. Olympia winner had high praise for Michal Krizo: 'He Looks great, round, and detailed' 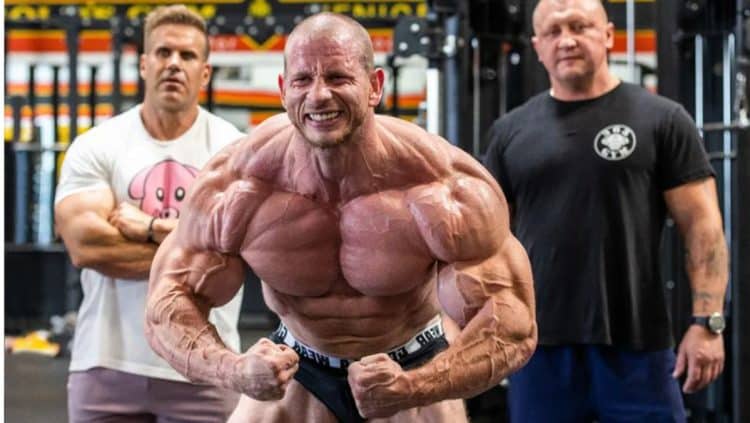 The hype surrounding Slovakian mass-monster Michal Krizo continues to build with bodybuilding legend Jay Cutler being the latest to take notice. In a recent video, Cutler got his first look at Krizo and believes the giant bodybuilder will shake up the Open class sooner rather than later.

Krizo’s muscle mass and sheer size are some of his greatest attributes as a bodybuilder. He used those qualities to find success in the IFBB Elite Pro League over the last few years. Krizo won the title at the 2021 Arnold Classic Europe Elite Pro show. In addition, he picked up another gold trophy after he won the Mr. Universe competition last October.

Earlier this month, Michal Krizo started his campaign for 2022 Olympia by switching from the IFBB Elite Pro League to the NPC. His intention is to earn his Pro Card in the NPC first, before winning a contest in the IFBB Pro League. Once those lofty goals are in the rearview, his plan is to storm the Olympia stage and win the prestigious show on his first attempt.

Cutler, a four-time Mr. Olympia winner, recently got the chance to visit Krizo after the Open class competitor flew to America to facilitate the NPC transition. Given his knack for the finer details of the sport, Cutler’s opinion weighs heavily in the bodybuilding community. After getting a ‘first look’ at Krizo, the former Mr. Olympia had a stark warning for the rest of the Men’s Open landscape.

In a recent YouTube video, the bodybuilding legend gave his immediate reaction to Michal Krizo’s physique after he hit a couple of mandatory poses.

After exchanging pleasantries, Cutler asked Krizo when he was planning to come over to the IFBB Pro League.

“So when you coming over?” Jay Cutler asked Michal Krizo.

“After the Prague Pro.” Krizo replied.

According to Cutler, if Krizo can maintain his shape and structure, he’s going to ‘upset a lot of people’ in the Men’s Open division. Furthermore, Cutler praised Michal for his impressive shoulder striations and the fact that he looks this big and conditioned so far out from 2022 Mr. Olympia.

“He’s going to upset a lot of people, especially looking this good this far out. Awesome. He looks great. Round. Detailed. He’s good with this shot [side triceps], a lot of striations here, which a lot of the guys don’t have. A lot of detail.” Cutler shared.

Fellow Slovakian bodybuilder Adela Ondrejovicova recently made the switch to the NPC as well. Ondrejovicova impressed in her new league quickly by earning her Pro Card. With her recent success, she had the opportunity to compete against other IFBB Pros.

Adela took her talents to the 2022 Finland Pro last weekend and won the show, clinching her invitation to compete at Olympia later this year. Ondrejovicova and Krizo are guided by the same coach, so many fans are expecting a lot from him given his teammate’s ability to make a successful transition.

With big shoes to fill, Krizo recently met up with decorated bodybuilder and coach Milos “The Mind” Sarcev. Milos was quite impressed with the rising bodybuilder and stressed that Krizo is ‘100% committed to making an impact in our federation’ in the months to come. In addition, the up and comer also visited bodybuilding’s east coast mecca, the Bev Francis Powerhouse Gym, located in Syosset, New York.

Cutler isn’t the only veteran taken aback by Krizo’s potential. 1983 Mr. Olympia Samir Bannout named Krizo as one of Nick Walker’s biggest threats. He believes the Slovakian native has a bigger v-taper and arms, which are some of Walker’s most notable strengths as a competitor. When talking about 2022 Olympia, Bannout said if Krizo comes in condition, he ‘guarantees he’ll make the top three.’

Despite competing in the IFBB Elite Pro League for most of his career, Krizo and “The Mutant” have a history. After Walker won the 2021 Arnold Classic title, Krizo criticized his show-winning physique. He added that Walker lacked symmetry to his build and explained that size isn’t everything during a competition. However, as time went on, Krizo recanted his statements about Walker.

Cutler understands elite talent when he sees it. After getting a first look at the imposing build of Krizo, Cutler is adamant he will upset a lot of people when he makes his way to bodybuilding’s most prominent stage.