The four-time Mr. Olympia winner gave his take on how dangerous Krizo can be in his maiden Olympia 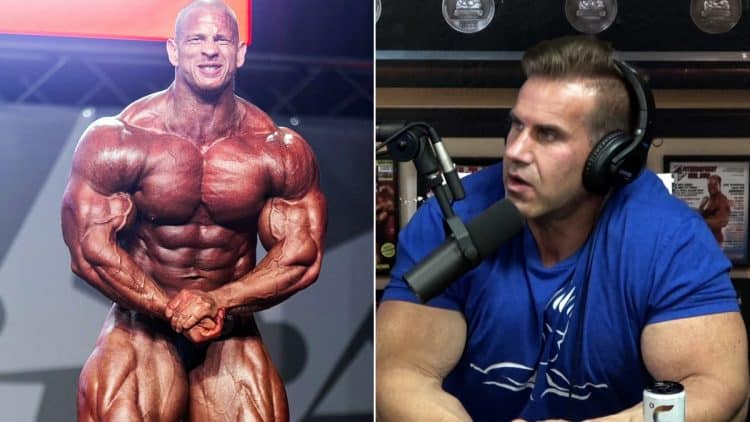 Legendary bodybuilder Jay Cutler is one of the most respected figures in the sport. He may have moved on from professional competition but he maintains a strong presence online with his social media accounts. In a recent episode of Cutler Cast, Cutler backed Michal Krizo to pose a real threat at the upcoming Mr. Olympia 2022.

Rising bodybuilding prospect Michal Krizo is one of the most promising talents to emerge this year. In July, he announced a switch to the NPC from the IFBB Elite Pro League. Many fans were excited to see Krizo line up against some of the freakiest mass monsters of the Men’s Open division. He gained popularity after he teamed up with renowned bodybuilding coach Milos Sarcev for a high-volume back workout. Sarcev was left in awe in his first impression of Krizo and suggested he could be a serious contender for the Olympia if he worked on his back.

Krizo earned his IFBB Pro Card with a statement victory at the 2022 Amateur Olympia Italy. Although the level of competition was not as strong as he was used to, Krizo significantly outmuscled all the other contestants with his huge size. He won both the overall show and the super heavyweight class.

Carrying the momentum of two consecutive victories, Krizo steamrolled his competition at the 2022 EVLS Prague Pro, earning his invitation to compete at 2022 Olympia.

Rival Blessing Awodibu fired shots at Krizo in his congratulatory message, welcoming him to the “a** whooping league.” In 2017, the pair went head to head at an amateur bodybuilding show, where Blessing defeated Krizo.

Last month, bodybuilding icon Jay Cutler talked about the lineup for the nearing Olympia. The four-time Sandow trophy winner believes it is very difficult to pick a winner and even decide the top 10 due to how competitive the roster is. Cutler examined Krizo’s physique and highlighted a need for him to bring up his conditioning to challenge reigning two-time Mr. Olympia champion Mamdouh ‘Big Ramy’ Elssbiay.

In a recent episode of Cutler Cast, Cutler shared his thoughts on whether Michal Krizo would pose a real threat at the upcoming Mr. Olympia 2022, scheduled for Dec. 15-18 at Planet Hollywood Resort & Casino in Las Vegas, Nevada.

“He was pretty impressive to be honest. The judge Steve, he worked the hell out of these guys. They talked about, who’s going to challenge him and remember this is his first professional contest.

He just got his Pro card like three weeks ago. He’s got the arms, shoulders, he could be fuller in the inner and upper pecs. But look at the size of him compared to this lineup. It would be interesting to see what he’s going to look like standing on Olympia.”

Cutler doesn’t believe Krizo brought his best form in the latest appearances and still managed to win based on his massive size.

“He wasn’t so conditioned. I think I just expected so much from him because I looked at him in Gold’s Venice many weeks ago. He was so impressive that when I saw him in Prague, I wasn’t blown away but I felt like he was a pretty clear winner. He definitely needs a little more back, more hamstrings, upper chest but he is damn impressive.

He’s definitely a contender and I would take notice in the top 10 for this guy. He’s got six more weeks and this was last weekend. He’s going to be sharper I would assume. Once he gathered the condition, he was pretty solid. The abs need to be more detailed but he’s got enough to really challenge the top guys right now. He’s just overwhelming in size.”

Jay Cutler believes Krizo has the potential to get a first-callout placing if he dials in his physique in the last six weeks for the show.

“This guy is the real deal and he’s going to be dangerous come December. If he dials it in, he could be in the first callout.”

Michal Krizo goes into Olympia with a lot of momentum. Last week, he crushed an intense shoulder and triceps workout to get the last bit of gains in just a day before his win at the EVLS Prague Pro. His coach also shared a physique update where he looked much more shredded.

1983 Mr. Olympia winner Samir Bannout argued that Krizo could easily be in the winner’s circle if he could exert more control over his muscles. He advised Krizo to ‘torture himself’ with posing practice just like legendary bodybuilder Frank Zane did to secure a spot on the podium.

Krizo will likely work on tweaking his diet to get the final touches in before stepping on the biggest stage in bodybuilding at the 2022 Olympia.